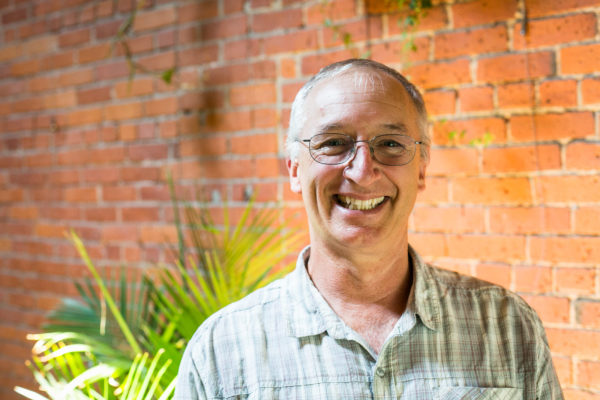 Chris Van Hook, founder of Clean Green, poses for a portrait at JAM Creative on Wednesday, May 30, 2018. Photo by Monica Donovan for Heady Vermont

What do you do when you’re an abalone farmer with almost half a million dollars’ worth of dead marine gastropods on your hands?

If you’re Chris Van Hook, you go to law school on line, sue the pants off the bureaucrats who ruined your business, and then start Clean Green and become the country’s most trusted certifier of organically grown cannabis, while driving around in a customized van/RV, “cherry paneled law office with the degree on the wall!” That’s what.

Van Hook was in Vermont last week doing his first Clean Green certification for growers (and Heady Business Partners) Matt Leonetti and Jessilyn Dolan of H.E.M.P – Horticultural Excellence Medicinal Perfection. In truth, Van Hook isn’t technically certifying healthfully-grown cannabis as organic, because that’s a USDA classification, and cannabis is still illegal according to the Feds. However, Clean Green’s standards are as detailed, rigorous, and widely respected as federal rules for organic broccoli or fava beans, and Van Hook’s clients say that Clean Green certified cannabis products move off the shelf up to five times faster than non-certified products.

The numerous awards his clients have won – from the High Times Medical (and recreational) Cannabis Cups to the Emerald Cup to the Golden Tarp Award to the The Patients’ Choice Award – serve as proof that it’s possible to grow top shelf cannabis according to the most rigorous organic agricultural practices.

Clean Green doesn’t limit their certification to growers, but also works with processors and handlers, as well as licensed distributors, outlets, dispensaries, and equipment manufacturers across the US and Canada.

They’ve also done more than just improve cannabis quality. In 2010, they started a two-year study on water use in Mendocino County, and discovered that each cannabis plant uses 1500 gallons of water per season, with 35 million gallons of water/day being pulled from streams in a salmon country ecosystem that was already struggling with severe drought and fertilizer plumes in their water supply. Van Hook says their study helped shift conversation away from the legality into water use, and helped the Mendocino cannabis community clean up an unsustainable system.

Given his 14 years with Clean Green, Van Hook has a nuanced and extremely  well-informed perspective on the country’s current cannabis landscape, and Vermont’s place within it. Legalization, he says, is “both good and bad.”

I always argue for open markets to determine the number of outlets. You don’t want a few number of people to control the outlets and the growing. How in the world could that be fair or equitable?

While he values legalization for promoting positive environmental practices, avoiding the nightmare of getting caught up in the penal system, and maximizing access to a highly beneficial plant, he notes that the costs of doing business legally go up, regulations can be “cumbersome and bureaucratic,” and as with any commodity as it becomes more widely available, the price drops and “historical black market farmers aren’t able to compete in regulatory marketplace.” Although, he says, “we knew this was going to happen five years ago, so the people who’ve been black market farmers for 30 years shouldn’t be surprised.”

Surveying the variety of legalization strategies in the West, Van Hook notes that Washington’s situation is fairly similar to Vermont’s, in that while they legalized cannabis for both medical and recreational use, the economic benefits go to a small number of people. In Washington, the state issued a high number of grower permits for large farms, while at the same time issuing very few permits for outlets. This led to declining farm prices – as low as $160.00/lb for trimmed flower – and price controls in the hands of the outlet owners.

This created a vertical system in which a limited number of retail outlets also grow and test their own products, and has resulted in a situation where “huge farms aren’t producing great cannabis. This structure, he says, has been “a disaster for the farmers.” Van Hook notes that “if a retail outlet has to purchase, rather than grow, you benefit dozens of farms” and don’t have a “cartel going on which artificially constrains the marketplace.”

Oregon, on the other hand, has an open market, which determines both the number of retail establishments as well as the prices of products. “I always argue for open markets to determine the number of outlets,” says Van Hook. “You don’t want a few number of people to control the outlets and the growing. How in the world could that be fair or equitable? Without competition, standards and quality can suffer. With greater outlet numbers the farm price in Oregon has dropped but stabilized at $400 – $800/lb for trimmed flowers.”

They say cannabis is not addictive, but growing it certainly can be!

Van Hook also notes another challenge of legalization, which is that “in the relatively unregulated market, there was an explosion of genetics and strains every year, with different tastes, smells, textures, growing for particular microclimates.” Now, with regulations in place, he says “you have to get every strain tested, up to every 150 pounds in the same strain. So, diversity is more problematic.” He adds that “people are starting to grow all one strain because they can’t afford the testing.” It’s going to be, he says sadly, “like tomatoes.”

When asked about tips for new growers, Van Hook had a detailed list for any aspiring cannaculturalist – from the home grower to the professional farmer looking to diversify their offerings:

Van Hook also says to not let friends or family members throw you shade for spending large chunks of time with your crop. He states definitively, “They say cannabis is not addictive, but growing it certainly can be!”