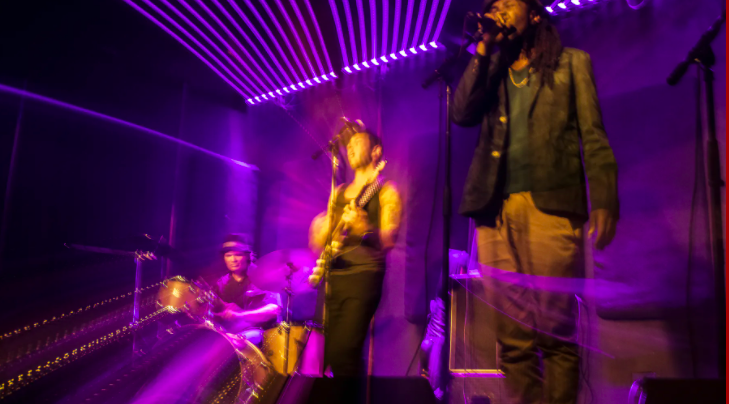 DB3 is the brainchild of NYC guitarist and bassist David Bailis (Pimps of Joytime), who after touring internationally with renowned artists for many years, started his own trio in 2017. What began as a residency has sparked an exciting creative outlet for Bailis, with the debut album slated for release in July of 2018 on Infinity Gritty/Ropeadope. David Bailis’s skilled guitar playing and diverse sonic background shine through in his live shows with influences ranging from jazz, afrobeat, funk and rock. His adventurous compositions and the band’s synergy take listeners on memorable ride.

For this very special show David and his band are joined by Bajah!

To tell you a bit more about Bajah, he is huge pop star in his home country, known as “the voice of the voiceless” – he raps and sing about peace and reconciliation and speak for the people’s needs, given the harsh civil war that ravaged Sierra Leone for 11 years. In terms of fan love, I’ve never seen anything like it – he is like Michael Jackson in Sierra Leone.  A huge part of this is because he really speaks on behalf of the regular people, he highlights real issues and problems facing his country, and he speaks out against government corruption.  A few years ago, he took a break from recording and traveled home to Freetown to be greeted by 30,000 people who showed up at the airport to form a parade “welcome home” for him.  Each Christmas eve he plays a show at the National Soccer Stadium in Freetown for 50,000 people.  His songs are huge radio hits in Sierra Leone – the problem is it’s virtually impossible for him to monetize his career back home – CD sales don’t exist (it’s all pirated) and he can make small funds touring and performing but because of the widespread, severe poverty people don’t have any money to spend on live shows.

Since we’ve brought Bajah to the U.S. he and his band have garnered the full support of The Roots: They played The Roots picnic multiple years, they have opened for The Roots dozens of times – frequently coming on stage as special guests during “The Roots Jam Sessions”, and they have Questlove and James Poyser production on the upcoming album, which also features Talib Kweli, K’naan, Nneka, Res, and production from Questlove, James Poyser, Rashad Smith (Ringo, Tumblin’ Dice – Erykah Badu, Q-Tip, etc.), Fyre Dept. El-P (Def Jux), and more.

Local songwriter Josh West kicks things off for what promises to be a full night of amazing music!