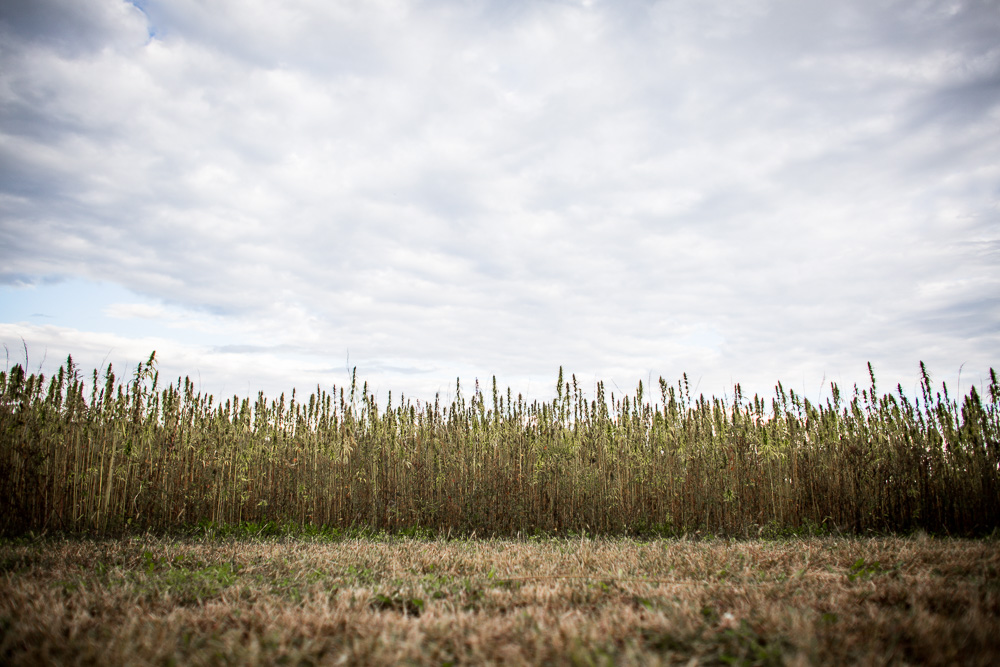 University of Vermont Agronomist and Nutrient Management Specialist Heather Darby on in a hemp field ready for harvest on Wednesday, September 28, 2016 in Alburgh, Vermont. by Monica Donovan for Heady Vermont.

Vermont hemp producers are staring down an uncertain future, as the state Agency of Agriculture and Farming prepares to withdraw its USDA-approved hemp production plan at the end of this month.

The hemp program will now be administered by the Vermont Cannabis Control Board, which is poised to embark on a rule-making process expected to wrap up in mid-2023. And with the change in oversight comes new regulations that have some in the cannabis community concerned.

In November, the board announced that all hemp-derived products containing more than one milligram of THC or more per serving will now be subject to the same testing, labeling and packaging requirements as cannabis products.

One local hemp purveyor, who wished to remain anonymous, noted that products already on the market in Vermont surpass this limit, and raised concerns that the new rules will encourage consumers to buy from out-of-state retailers.

Compliance Director Carey Giguere said the board considered both the natural composition of hemp plants and the way the products are marketed when setting this threshold.

“Your average therapeutic dose of CBD is eight to 10 to 20 milligrams, and with hemp having about a 20:1 ratio naturally in the plant, that puts you right around one,” Giguere said. “Products with more than one milligram of hemp-derived THC are really meant to be intoxicating.”

Giguere says that “one milligram of hemp-derived THC are really meant to be intoxicating,” but hemp processors have pushed back on this logic.

But hemp processors have pushed back on this logic. One local hemp purveyor, who wished to remain anonymous, noted that products already on the market in Vermont surpass this limit, and raised concerns that the new rules will encourage consumers to buy from out-of-state retailers.

“In my personal business, our full spectrum and blended CBD:THC products contain 1.2mg to 2mg of THC per serving,” they wrote in an open letter to the board. “I communicate regularly with our customers, and not once have they ever reported feeling intoxicated after ingestion.”

“ I communicate regularly with our customers, and not once have they ever reported feeling intoxicated after ingestion,” wrote an anonymous hemp grower in an open letter to the Board.

Requiring hemp businesses to become licensed manufacturers also increases their costs substantially, the writer noted. As of 2020, registering as a hemp processor in Vermont cost between $100 and $3,000, depending on the acres planted. Fees for cannabis manufacturers range from $750 to $15,000.

When the Vermont Hemp Program first launched, the registration fee was a flat $25. As the hemp boom reached a fever pitch in 2019, nearly 1,000 growers registered almost more than 9,000 acres of hemp for cultivation in Vermont.

“Those of us who entered into the hemp business did so without the significant monetary fees in place now,” wrote the anonymous hemp grower. “These newly imposed fees are not built into existing business models, and are causing unforeseen expenses that cannot always be easily covered by new or smaller operators.”

“I feel like a lot of the rules that were implemented were directly because hemp companies were selling high dosage [hemp-derived] THC products with little to no regulation on milligrams or packaging,” said Cofounder Christopher Moroch of The Cannabis Collective. “This was a huge hurdle for us manufacturers that are under the microscope.”

“As we look to make Vermont hemp products weaker than those in other states, [we must] consider the reality that consumers will simply purchase products from out-of-state retailers,” they said.

Control board member Julie Hulburd said the community will have an opportunity to give feedback on updates to the hemp program in early 2023.

The board expects to open registration for hemp businesses in mid-2023. In the meantime, hemp processors must register directly with the USDA to stay in compliance with federal law.

“Some of the hemp program already exists. So there’s an opportunity for folks to share with us what is working, what isn’t working, so we can have that top of mind as we start building the rules,” Hulburd said. “That was not the case with cannabis so much, as we were trying to build a regulated program from scratch.”

The public commentary is likely to be robust, as many members of Vermont’s hemp and cannabis industries are skeptical of the new regulations. “I’m just not sure how the cannabis market we all envision for Vermont is going to come from this over-regulated system,” said Founder Kendall Smith of White River Growpro. “It’s crazy to think Vermont now has the most rules of any state regarding CBD.”

The board expects to open registration for hemp businesses in mid-2023. In the meantime, hemp processors must register directly with the USDA to stay in compliance with federal law. Though nothing is finalized yet, Hulburd said she doesn’t anticipate additional requirements for already-licensed manufacturers who want to sell hemp-derived products.

“It’s crazy to think Vermont now has the most rules of any state regarding CBD.” — Kendall Smith, White River Growpro

“I don’t think we have put all those puzzle pieces together yet but, as we have in the past, as soon as a picture becomes clearer, we’ll release it to the public so folks know,” Hulburd said.

The board’s announcement said synthetic products are also subject to the one milligram limit, but Giguere stressed that the role of these products in the market moving forward remains to be seen.

“The decision about whether or not they’re appropriate for our market hasn’t been discussed yet, and that’ll be discussed during the rulemaking process,” Giguere said.

Editor’s Note: This article previously stated that the federal THC limit on legal hemp is 1%. While industrial hemp standards under U.S. law remain 0.3%, the USDA did raise the limits for triggering eradication, or destruction of a ‘hot’ crop, to 1% in January of this year.