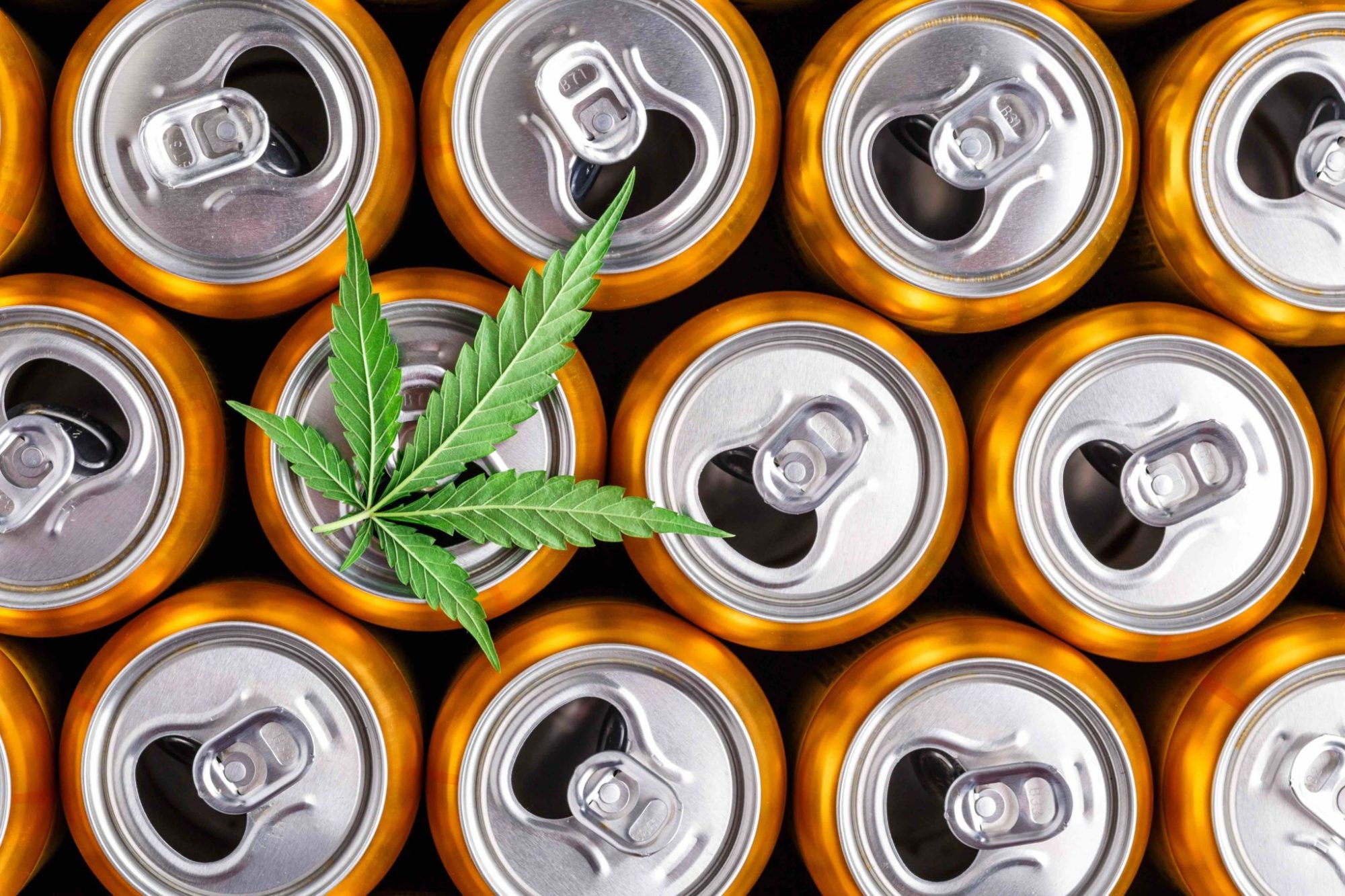 Mixing alcohol and cannabis: What should you know?

If you’ve ever downed a couple beers and then taken a toke, you may have noticed it has what almost feels like a “multiplier” effect, increasing the effects of the THC. This effect becomes more pronounced with higher alcohol intake. Alcohol and cannabis are by far the two most commonly used substances, and mixing alcohol and cannabis happens frequently, in particular with young adults.

Occasionally mixing alcohol and weed — also sometimes called crossfading — likely won’t lead to major health problems. But there are a lot of variables to consider, including which one you use first and how you consume them. If you aren’t careful, mixing the two can lead to a case of the spins or “greening out.”

Here, we dive into research-based facts about what happens when you drink and smoke weed at the same time, and why you should use caution. We also cover harm reduction techniques and what to do if you consume too much.

What happens when you combine alcohol and weed?

When cannabis is combined with central nervous system depressants such as alcohol and opioids, what’s called an “additive effect” can occur, in which alcohol increases absorption of weed’s main psychoactive ingredient, delta-9-tetrahydrocannabinol (THC), resulting in a stronger high.

According to a 2001 study, this could occur because alcohol dilates blood vessels in the gastrointestinal tract. When blood vessels widen, THC can be absorbed faster. This may be most impactful with cannabis edibles because, like alcohol, they are processed through the liver before entering the bloodstream.

This increased absorption generally results in a stronger THC high. While this might be a fun time for some folks, it can cause others to “green out.” This refers to a range of unpleasant physical symptoms that can result from a strong high, including accelerated heart rate, sweating, dizziness (“the spins”), nausea, and vomiting. 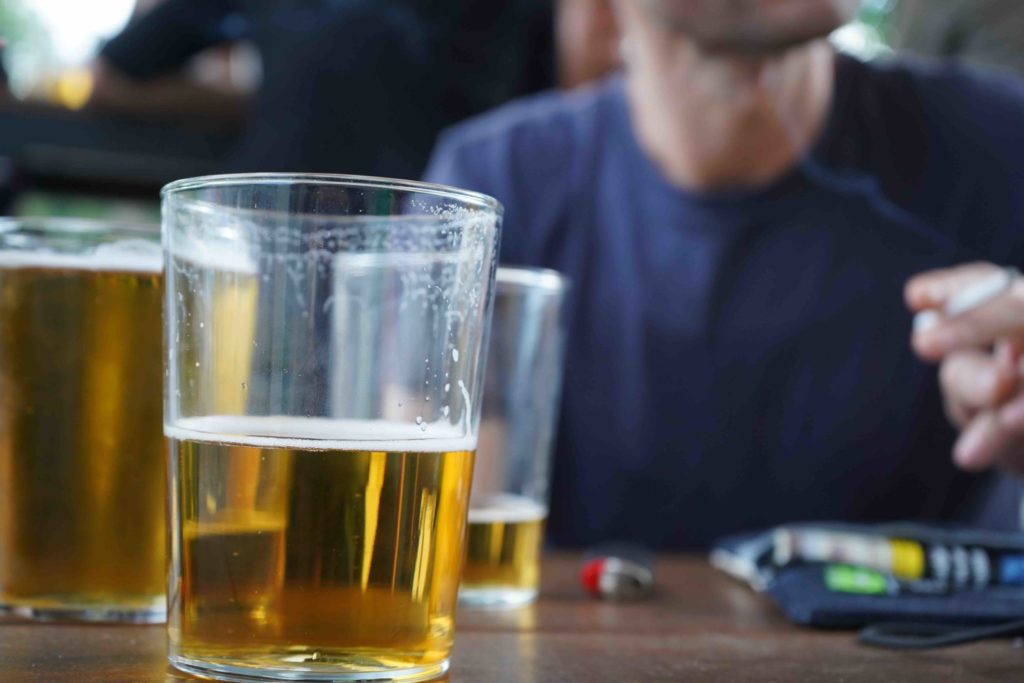 Drinking before using weed can intensify weed’s effects. This is because alcohol increases the absorption of THC.

This generally results in a stronger high. Those who are lighter or newer cannabis users, or even those who don’t regularly consume alcohol, should proceed with caution.

USE CAUTION: Drinking alcohol before using weed can ramp up the effects of THC. If you’re a seasoned pro, this might not be a huge deal. But if you’re sensitive to weed or don’t have much experience using it, it’s best to avoid mixing the two. In the same breath, if you’t often drink, watch out for the effects of mixing. If you do, move slowly, be sure to listen to your body and avoid getting behind the wheel.

While there’s some research around the effects of drinking alcohol before using weed, there isn’t much about the opposite approach. The studies that do exist are old and mostly inconclusive.

If using weed does indeed slow the absorption of alcohol, it might also delay feelings of drunkenness. This might seem like a good thing, but it makes it harder to know how impaired you really are.

If using weed does indeed slow the absorption of alcohol, it might also delay feelings of drunkenness. This might seem like a good thing, but it makes it harder to know how impaired you really are.

For example, you might feel like you’re good to drive, but your blood alcohol level may be well over the legal limit.

USE CAUTION: Using weed before drinking alcohol may minimize the effects of alcohol. This means you might be tipsier than you feel, increasing your risk for becoming overly intoxicated.

If you use weed before drinking, pay extra attention to how much you’ve had to drink. To err on the side of caution, assume you’ve had a bit more to drink than you actually have, or aim to drink less than you usually would without using weed.

So, are there major risks?

A number of recent studies focus on how combining weed and alcohol affects your driving.

Researchers at Columbia University Mailman School of Public Health found that two in five drivers who report using alcohol and cannabis in the past year drove under the influence of alcohol, cannabis, or both. Drivers aged 16 years or older who reported any past-year alcohol and cannabis use in the National Survey on Drug Use and Health (2016-2019) were included with a final study sample of 34,514 individuals.

Daily alcohol and cannabis use were found to increase the likelihood of DUI-A and DUI-C, respectively, and both alcohol/cannabis daily use was associated with DUI-A/C.

In a 2013 study, 80 people participated in six testing sessions. In each session, participants consumed a different combination of placebo, low, and moderate doses of THC and alcohol. Then they completed a driving simulation.

A study from 2011 evaluated performance on cognitive tasks among 21 heavy weed users who had consumed alcohol.

Over the long term, combining alcohol and weed may be associated with decreased cognitive function and changes in brain structures, such as the hippocampus.

A 2017 review of existing studies notes that people who use alcohol and weed together tend to consume more of both. This can increase your risk for developing a dependence on alcohol, weed, or both.

To avoid the risks of combining alcohol and weed, it is best to avoid combining them at all. However, if you do choose to use both at the same time, there are things you can do to help minimize harm to yourself and others. This is called harm reduction.

What is Harm Reduction? Harm reduction refers to a range of public health policies designed to lessen the negative social and/or physical consequences associated with behaviors such as drug use or sexual activity, without necessarily requiring abstinence.

Things that you can do to minimize risk include:

How to handle a bad reaction

If you’ve mixed cannabis and alcohol and are having a bad reaction, you may be experiencing additive effects. This can also happen if you’ve consumed to much weed — with or without alcohol. This is sometimes called “green out” or “spinning out.” Symptoms could include:

Remember that EVERYTHING WILL BE OKAY and this too shall pass.

Stay calm. When it comes to bad reactions, patience is key. Your feelings will go away in time. If possible, find something, such as music, to focus on other than your discomfort.

Find a safe space to sit or lie down. If you feel dizzy, find a quiet place to rest until you feel better. If possible, ask a friend to help you get home. Don’t drive anywhere!

Eat or drink to boost your blood sugar. A bit of food or a sugary drink can help relieve dizziness. Try something hearty, like soup broth. If you don’t have any on hand, juice will do.

Stay hydrated. Both alcohol and weed can leave you feeling dehydrated. That can lead to dry mouth, headaches, and dizziness. Drink water to put your body back on track. If you’re feeling nauseous, take small sips.

Call for help if you need it. If you are truly feeling like you’re not okay and you can’t ride it out, call your doctor or have someone take you to a hospital. There’s no shame in asking for help.

Are there studies on mixing alcohol and cannabis?

There are a number of studies in this area, but, as always, more research needs to be done. Here are more of the studies we’ve referenced in this article:

When cannabis is combined with central nervous system depressants such as alcohol, what’s called an “additive effect” can occur, where alcohol increases the absorption of weed’s main psychoactive ingredient, THC. While this may be fine for some folks, people who don’t regularly use weed should use caution when drinking and then smoking.

Smoking and then drinking can delay feelings of drunkenness, causing you to feel less impaired than you really are. Either way, approach with caution when mixing these substances.

Combining weed and alcohol has been shown to consistently impair driving performance and result in a higher rate of road incidents. Whether you’re a seasoned pro or not, avoid getting behind the wheel when high, drunk and especially both. 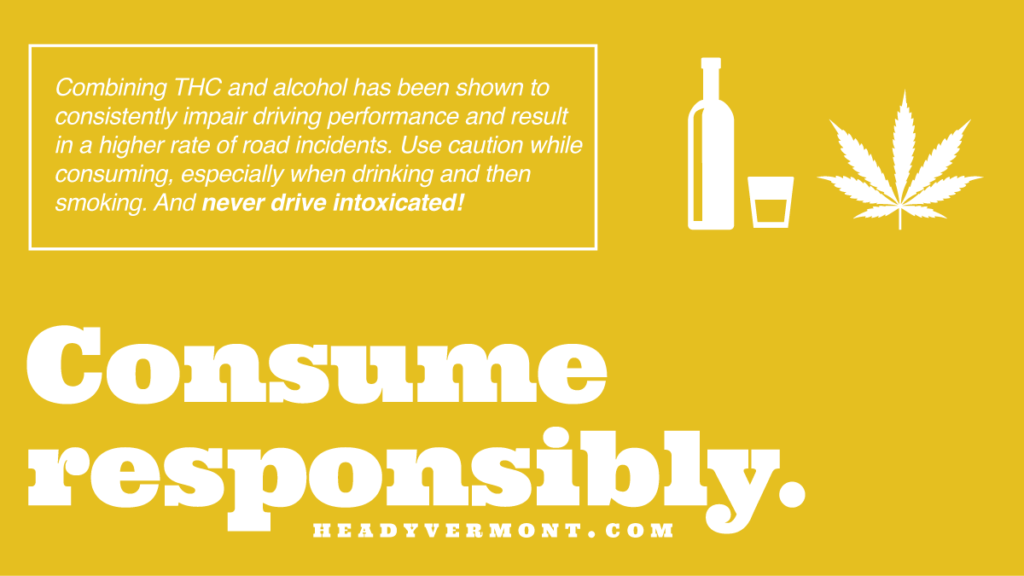