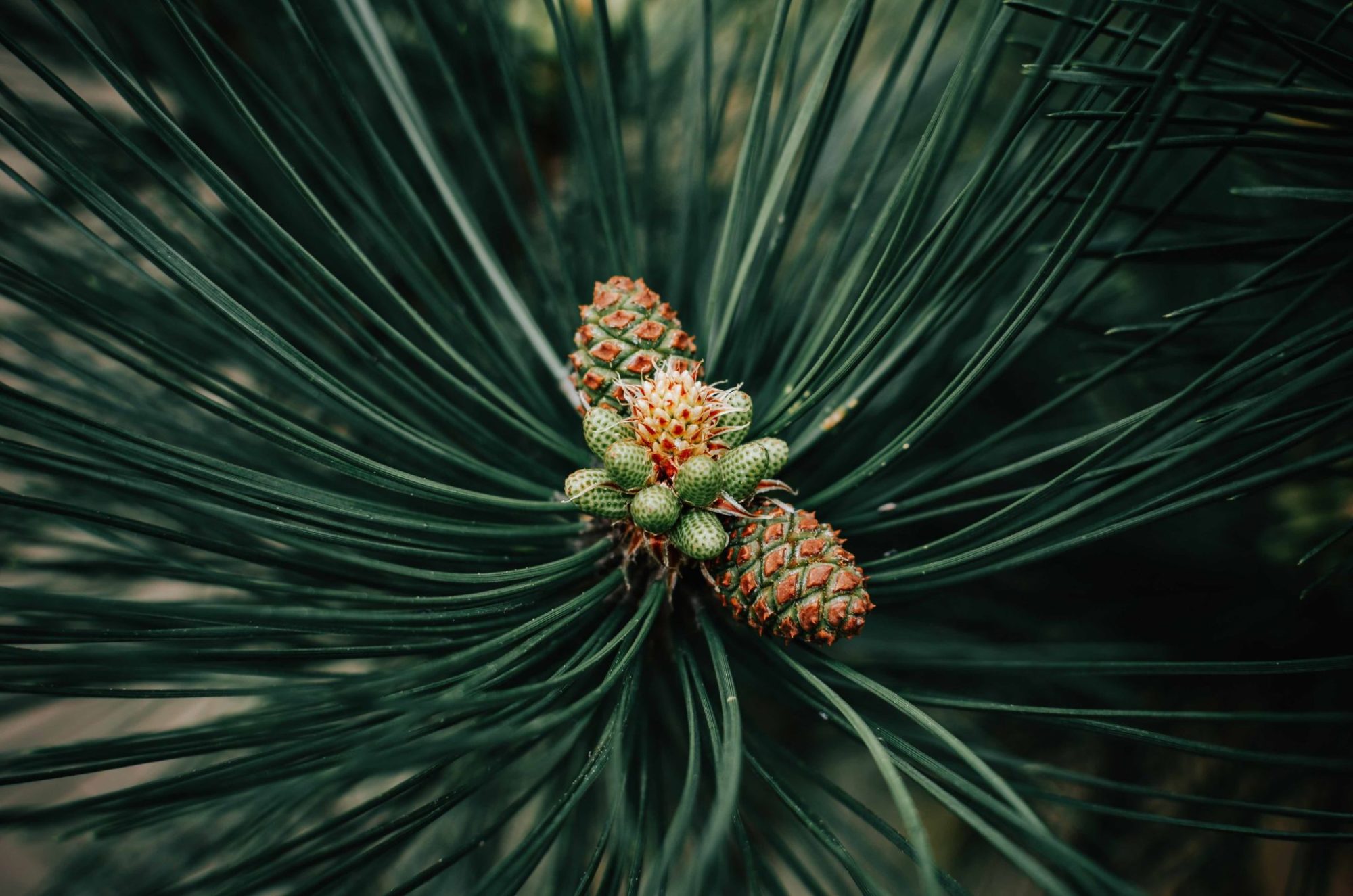 Pinene, one of the most researched and documented terpenes found in cannabis, is available in two varieties: Alpha-pinene (sometimes denoted as α-pinene) and beta-pinene (β-pinene). Learn more about the cannabis terpene pinene:

Terpenes like pinene are crucial for cannabis therapy. They can enhance the effects of cannabinoids and reduce the expected adverse effects. As we have mentioned before on our site, this interaction is described as the entourage effect.

Pinene has many potential benefits. It can act as an anti-inflammatory, promotes pain relief and relaxation, aids in memory and focus, and supports respiratory function. Another great benefit is the distinctive taste that pinene adds to different cultivars. Strains with high concentrations of pinene are reported to be more stimulating, enhancing mental focus and alertness and making them ideal for daytime use.

Pinene is a monoterpene, one of the simplest types of terpene. It has the molecular formula C₁₀H₁₆ and comes in the form of alpha-pinene and beta-pinene. The only difference between these two compounds is the base molecule’s particular class of chemicals (alkene).

The alpha type carries a scent of pine needles and rosemary; beta-pinene conveys an aroma of basil, dill, hops, and parsley. The alpha variety is significantly more common in the cannabis herb, and is typically the variant being referenced here if no distinction is provided between the two.

Of the 200 aromatic terpenes possible in an individual strain (or cultivar) of cannabis, pinene is the second most common behind myrcene.

Pinene is the most common terpene in the plant world and produced in significant quantities by basil, cedar, conifer trees, dill, eucalyptus, oranges (mostly the rind), parsley, pine trees (mostly the needles), rosemary, and literally hundreds of other plants.

This abundant terpene is present in turpentine (distilled from pine trees), which has been employed for thousands of years as a detergent, medicine, and paint solvent. Pinene’s distinct aroma makes it a common component in soap, cleaning products, and air fresheners.

Other Sources of Pinene (Not Cannabis)

In addition to cannabis, you can find pinene in a range of other plants and their essential oils. These include lime peel oil, eucalyptus oil, and tea tree oil.

You can also find pinene in many common kitchen herbs and spices, such as:

By means of the entourage effect, pinene is capable of regulating the effects of THC. Strains with high pinene content could boost your sense of alertness, whereas another common cannabis terpene called myrcene produces an opposite sedative effect instead. This goes to show how terpenes can codetermine both the potency and the specific effects of a cannabis high.

Pinene’s most pronounced medicinal efficacy is its power to deliver mental focus and energy. Dr. Ethan Russo notes in a 2011 study that the terpene’s most “compelling role” is its activity as an acetylcholinesterase inhibitor aiding memory.

This terpene has been found to counter the short-term memory loss associated with the infamous psychoactive cannabinoid tetrahydrocannabinol (THC), making it a potential ingredient in a wide range of cannabis products.

It helps asthmatics and patients who suffer lung conditions due to its role as a bronchodilator, meaning it improves airflow to the lungs. This function is noted in a joint study by Dr. John McPartland, DO, MS (also a professor at UVM) and Dr. Russo, titled Cannabis and Cannabis Extracts: Greater Than the Sum of Their Parts?

Pinene is also an anti-inflammatory, making it noteworthy in potential treatments for a variety of diseases and conditions causing inflammation, including arthritis and fibromyalgia. And with studies discovering its antibacterial and anti-fungal effects, pinene has also been used as an effective ingredient in topical antiseptics.

One of the most promising areas of pinene’s efficacy is against cancer, a disease that resulted in more than 1.7 million new cases and killed more than 600,000 people in the United States alone in 2018. Studies suggest Alpha-pinene can stop tumor growth and supplement chemotherapy treatments.

Other benefits include euphoria and reduced oil production in oily skin.

One enjoyable way to benefit from pinene is the practice of ‘forest bathing.’ This activity is popular in Japan, where it is known as shinrin-yoku. It is also one of the core elements of a German complementary medicine system known as ‘Kneipp therapy.’

The air in forests is especially rich in terpenes such as pinene (and numerous other beneficial terpenes including limonene, camphor, menthol and myrcene). Therefore, walking and exercising in these areas has great therapeutic potential. Coupled with the awe of being immersed in nature, it is unsurprising that forest bathing has the reputation of being fantastic for your health.

Research suggests that forest bathing has many potential benefits. These include improving immune function and cardiovascular health, aiding mental relaxation, and relieving respiratory disorders. It may also prove useful for people suffering from mood disorders such as stress, anxiety, and depression. 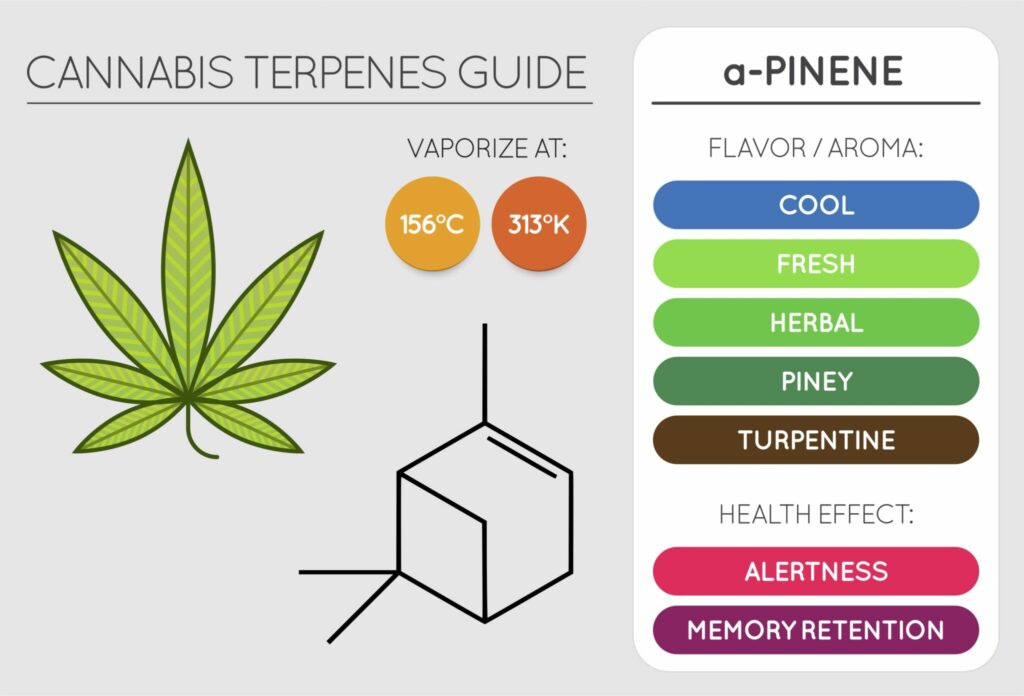