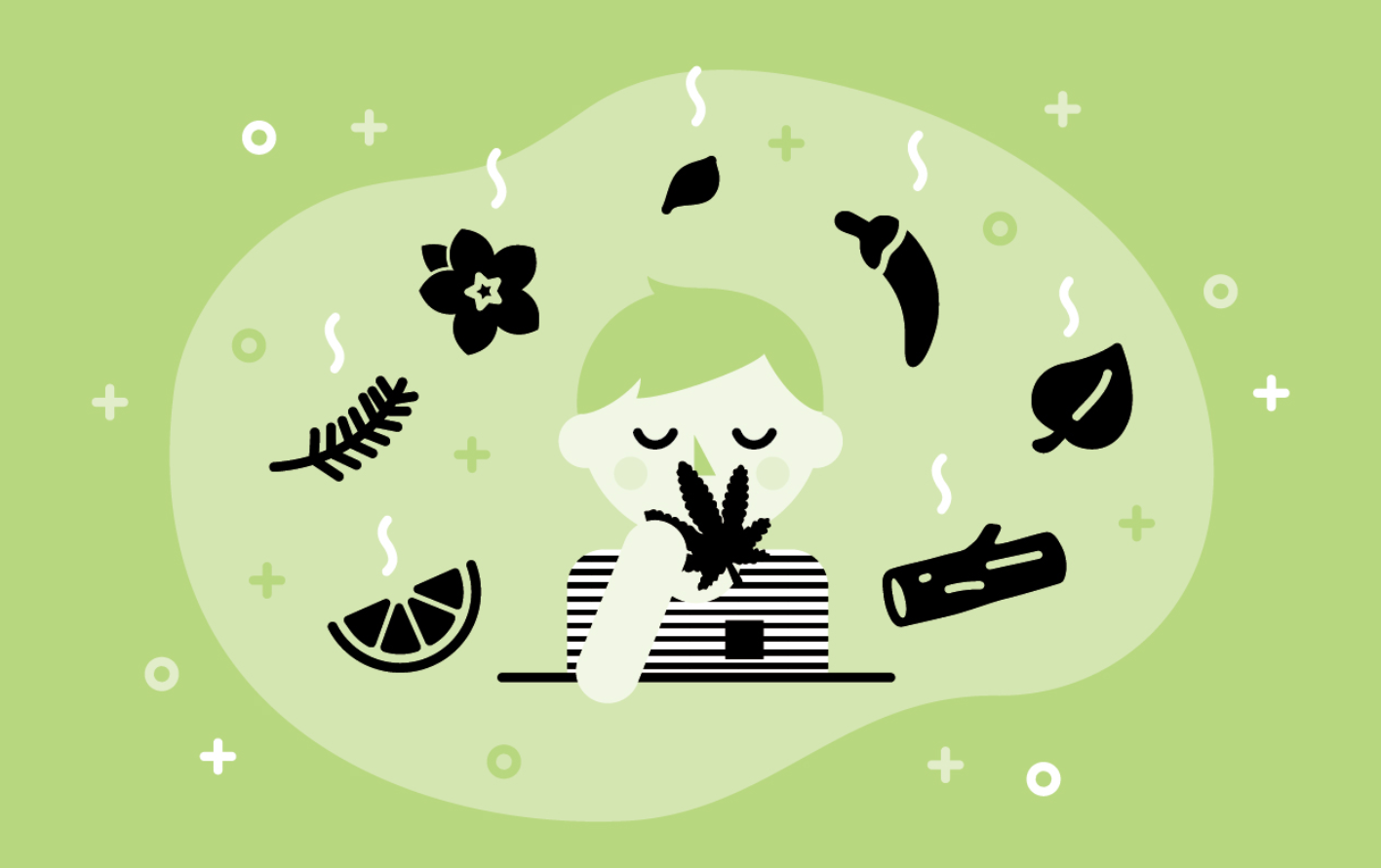 Terpenes are the compounds responsible for the way most plants smell. They are abundant in cannabis and many other plants, fruits, herbs and even some animals. Learn more about cannabis terpenes:

The name terpenes, also sometimes called terpenoids or terps, encompasses a large group of volatile unsaturated hydrocarbons found in the essential oils of plants, especially conifers and citrus trees. There are thousands of types of terpenes, and potentially many more still unknown. If you’ve ever smelled an orange, used an essential oil, or appreciated the complex scent of cannabis, you’ve enjoyed terpenes.

Maximize Your Potency & Activate Your Herbs with the New Decarb Bundle! Get 10% OFF Plus Free Shipping

Terpenes are responsible for the aroma and flavors of cannabis and influence its effects by interacting with cannabinoids. Terpenes are formed inside cannabis trichomes, and their relative presence is directly affected by both the spectrum and intensity of light exposure.

Terpenes may also play a key role in differentiating the effects of various cannabis strains – challenging standard beliefs held about indica vs sativa strains. However, more studies are needed to understand how and to what extent.

Over 100 different terpenes have been identified in the cannabis plant, and every strain tends toward a unique terpene type and composition.

This is the most abundant terpene in cannabis and may make up as much as 65% of the total terpene profile in some strains. It produces earthy or musky notes, similar to cloves. Myrcene helps to reduce inflammation and chronic pain and may be included in cancer treatment.

It is believed that eating a mango about 45 minutes before smoking weed will produce a stronger mental buzz. Mangoes are rich in myrcene and this may help to boost the effect of THC.

This is the second most abundant terpene in cannabis, and it produces a citrusy aroma. It is also found in high amounts in the rind of citrus fruits such as oranges and tangerines. It is commonly used in the manufacture of cleaning products and cosmetics.

Limonene is a mood-enhancer often used in aromatherapy. It also has antifungal and antibacterial properties. Recent studies have revealed that this terpene may also have a role to play in reducing tumor size.

Linalool is responsible for the floral notes in cannabis. It is also common in lavender and aromatic herbs. It produces relaxation and induces sleep.

It has a strong spicy aroma and is also common in black pepper, cinnamon, and spices such as oregano, basil, and rosemary. Caryophyllene is the only terpene that binds to CB2 receptors. It is commonly used in topical creams as an anti-inflammatory agent. Besides this, it has shown promise in alcohol addiction rehabilitation.

Pinene terpenes have the aroma of pine trees. They produce anti-inflammatory effects in humans also, they help to improve airflow in the lungs and respiratory function. They also inhibit memory loss related to the excessive use of THC.

Humulene is a primary terpene that is common in hops. It gives off an earthy aroma with spicy notes. Humulene is also found in sage, cloves, and black pepper. It has appetite- suppressing properties. It also helps to combat inflammation.

This is a rare terpene that smells of lilacs. It has calming and mood enhancing properties. Some recent studies have also shown that it can exhibit antimalarial properties.

This is an exotic terpene that is found in significant amounts in the sweet Valencia oranges. It has a sweet citrusy aroma and offers insect repelling benefits.

Terpinolene has a piney aroma with floral essences. It is also present in high amounts in sage and rosemary. It is commonly used in the manufacture of soaps and perfumes. Some studies have shown that this terpene has depressant effects in the central nervous system. It induces drowsiness and may be used to reduce anxiety and stress.

This terpene has a tobacco-like aroma. Studies have shown that it can offer neuroprotection benefits.

This terpene has a tropical and musky aroma. Like most other terpenes, ocimene offers anti-inflammatory benefits. It also has antifungal and antiviral properties.

Phellandrene is a terpene with a rich history. From thousands of years back it has been used in Traditional Chinese medicine to relive digestive disorders. It has also been used to treat fungal infections. It is also found in eucalyptus oil.

This terpene produces a pleasant cypress aroma. It helps in the healing and restoration of broken bones. It also improves memory and may be used in the treatment of Alzheimer’s disease.

Alpha-bisabolol, also known as levomenol, produces a sweet tropical aroma. It is also found in high amounts in chamomile flower and candeia tree. It has been used to treat bacterial infections on the skin.

This terpene is also known as cineol and it is produces minty notes similar to what is produced by eucalyptus trees. It has antibacterial and antifungal benefits. Preliminary research reports have shown potential of this terpene in treating Alzheimer’s disease.

Pulegone
This terpene is found in small amounts in cannabis strain while higher amounts may be found in rosemary. It has a pleasing peppermint smell and may help to combat pain and high temperatures. It also has insecticidal properties.

Sabinene
Sabinene is also found in Norway Spruce and Basil. It has a piney aroma and offers potent antioxidant benefits.

Trans-nerolidol
This is a secondary terpene that is also common in flowers such as jasmine, lemongrass, and tea tree oil. It has floral woodsy aroma. It is best known for its antiparasitic effects.

Camphene
Camphene has a strong aroma of fir needles. When it is mixed with vitamin C it becomes a powerful antioxidant. It has also shown potential in the treatment of eczema and psoriasis.

Borneol has a herbal and minty aroma and may also be found in high amounts in rosemary, camphor, and mint. It is known for its insecticidal properties. It also has anticancer effects, as one recent study has shown.

Phytol
This is a rare terpene that produces a floral balsamic aroma. It offers sedative and antianxiety benefits. It is also used as a de-stressing compound.

Fenchol
This is a mono terpene with a lemon-lime aroma. It is also common in basil. It offers antimicrobial and antibacterial properties.

Camphor
This is a secondary terpene that has a strong aroma this is perfect for repelling insects. It has been used for many years as a cold and cough remedy. It also helps to improve metabolism and circulation.

This is a versatile terpene that is also found in ginger, tea tree, and jasmine. It produces a woody and fruity aroma. It helps to fight bacteria, fungi, and parasites.

This terpene is also referred to as champacol. It has a pungent aroma. It has been used for many years to treat syphilis and regulate menstruation.

This terpene has a spicy aroma like the one you expect to get from black pepper. It has anti-inflammatory, antibacterial, and antitumor properties.

This terpene is also common in celery seeds. It exhibits anti-inflammatory and antioxidant benefits.

This is a rare terpene in cannabis and it produces a floral aroma. It can be used in alleviating symptoms of essential tremors as well as other neurological tremors.

This terpene is commonly used as an additive in the pharmaceutical industry. It has powerful antioxidant benefits.

Geranyl Acetate
This terpene is common in lemongrass and citronella, and cannabis as well. It has a fruity aroma and offers antimicrobial benefits.

This terpene has a menthol aroma and offers gastro protective benefits. It has also helped to minimize the frequency of seizures in animal studies.

This is not by any means a complete list! We will continue to add and explore more terpene compounds on the Heady platform.

This article may contain affiliate links, for which we receive a modest commission that helps support our platform and our mission to provide news and educational content.