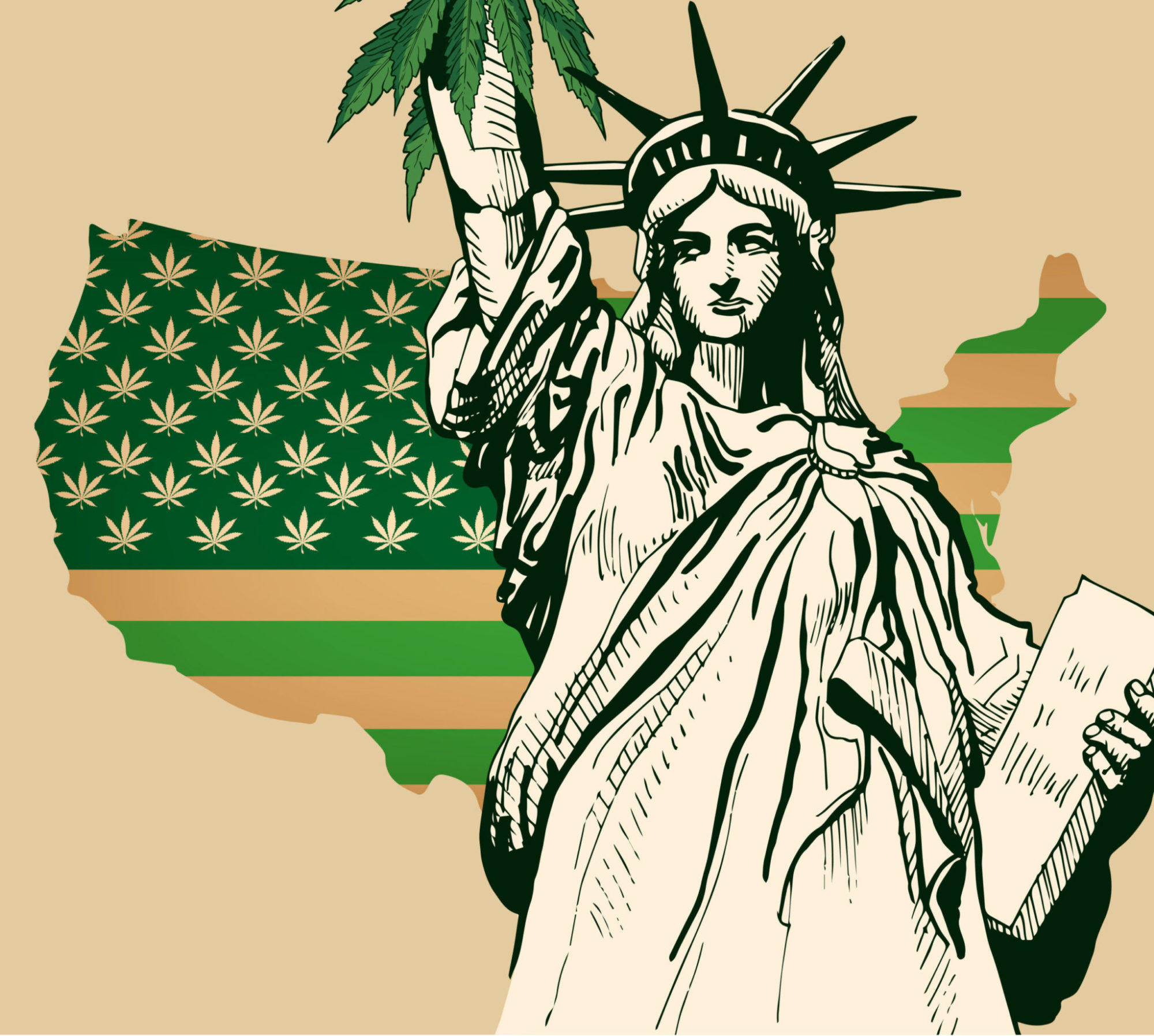 Landmark act immediately legalizes of public possession of up to three ounces of cannabis, extends employment protections to individuals who use recreational cannabis, and sets the stage for a potential $4.6 billion market

Under the MRTA, adults 21 years or older can now possess up to three ounces of marijuana (or 24 grams of concentrated versions of the cannabis plant) outside of their home.  In their home, adults may store up to five pounds of the plant. While adult use retail sales of cannabis will not begin until at least 2022, most aspects of the law have taken immediate effect.

“This was one of my top priorities in this year’s State of the State agenda and I’m proud these comprehensive reforms address and balance the social equity, safety and economic impacts of legal adult-use cannabis,” New York Gov. Andrew Cuomo (D) said in a press release.

“The bill creates automatic expungement of previous marijuana convictions that would now be legal,” the governor said. “This is a historic day—one that rights the wrongs of the past by putting an end to harsh prison sentences, embraces an industry that will grow the Empire State’s economy, and prioritizes marginalized communities so those that have suffered the most will be the first to reap the benefits.”

The bill creates automatic expungement of previous marijuana convictions that would now be legal.

This is a historic day.

I thank the Leader and Speaker and the tireless advocacy of so many.

The bill, approved by state lawmakers on Tuesday, legalizes the drug for adults 21 and older and moves toward the creation of a potential $4 billion-plus industry that could become one of the nation’s largest markets.

A new Office of Cannabis Management—an independent agency operating as part of the New York State Liquor Authority—would be responsible for regulating the recreational cannabis market as well as the existing medical marijuana and hemp programs and would be overseen by a five-member Cannabis Control Board. Three members would be appointed by the governor, and the Senate and Assembly would appoint one member each.

The Office of Cannabis Management will create a system of licenses for commercial cultivators, processors, distributors, retailers, cooperatives and nurseries would be created, with a prohibition on vertical integration except for microbusinesses and existing medical cannabis operators.

More Highlights of the Act:

Individual municipalities would be allowed to opt out of allowing retailers or social consumption sites by the end of this year, but residents could seek to override such bans via a local referendum process.

Current medical cannabis businesses could participate in the recreational market in exchange for licensing fees that will help to fund the social equity program.

Social consumption sites and delivery services would be permitted, when regulations are in place. Municipalities could also opt out of allowing these sites. And smokable hemp flower sales will be allowed.

Cannabis products will be subject to a state tax of nine percent, plus an additional four percent local tax that would be split between counties and cities/towns/villages, with 75 percent of the local earnings going to the municipalities and 25 percent to the counties.

Tax revenue from cannabis sales would cover the costs of administering the program. After that, 40 percent of the remaining dollars would go to a community reinvestment fund, 40 percent would support the state’s public schools and 20 percent would fund drug treatment facilities and public education programs.

What Does The This Cannabis Act Mean For New Yorkers?

Effective immediately, there are no penalties for public possession of up to three ounces of cannabis or 24 grams of cannabis concentrates, such as oils derived from a cannabis plant.

People who are 21 and older are allowed to use, smoke, ingest or consume cannabis products; they can also give them to others who meet the same age requirement.

People are legally allowed to smoke in public wherever smoking tobacco is legal … Smoking publicly where it’s not permitted will result in civil penalty of $25 or up to 20 hours of community service.

People are legally allowed to smoke in public wherever smoking tobacco is legal.

Smoking cannabis is not permitted in schools, workplaces or inside a car.

Localities, as well as a new state cannabis agency, could create rules to more strictly regulate smoking cannabis in public. Smoking publicly where it’s not permitted will subject people to a civil penalty of $25 or up to 20 hours of community service.

An officer is not allowed to use the smell of cannabis as a justification to stop and search a pedestrian.

An officer, however, is not allowed to use the smell of cannabis as a justification to stop and search a pedestrian.

People are legally allowed to smoke cannabis in private residences, as long as the landlord doesn’t prohibit you from doing so, as well as in hotels and motels that permit it.

For recreational purposes, users will be allowed to cultivate up to six plants at home, indoors or outdoors, and a maximum of twelve plants total per household.

Homegrow would not take effect until regulators set rules for it, and they would have a maximum of six months to do so for medical patients and must do so for adult-use consumers no later than 18 months after the first retail recreational sales begin. Once home cultivation becomes legal, people could store up to five pounds of cannabis at home.

Medical marijuana patients, or their designated caregivers, will also be able to grow the plants, six months from now.

With the new law, New York also joins a number of other states in extending employment protections to individuals who use recreational marijuana. Under NYS Labor Law Section 201-d, employers are generally prohibited from discriminating against, terminating, or refusing to hire, employ, or license individuals based upon their participation in legal recreational or political activities or use of consumable products.

MRTA amends Section 201-d by prohibiting employers from refusing to hire, employ, or license, terminate, or otherwise discriminate against individuals because of their lawful use of cannabis outside of work hours, off the employer’s premises and without use of the employer’s equipment or other property.

The list of medical conditions covered will be significantly widened and will include Alzheimer’s disease and muscular dystrophy. Under the MRTA, any medical condition will qualify for participation in the medical marijuana program if it is recommended by a licensed medical practitioner.

Medical cannabis companies will be allowed to enter the more lucrative recreational market under certain circumstances, a measure they lobbied aggressively for.

Driving while impaired from marijuana would remain a misdemeanor, despite early reports that lawmakers had settled on downgrading it to a violation.

An officer can use the smell of burned cannabis as a reason to suspect that a driver is under the influence, but he or she is only allowed to search parts of the car that are readily accessible to the driver, so not the trunk, for example.

Unlike with alcohol, there is currently no easy way to quickly and reliably measure whether a person is under the influence of cannabis, especially since traces of the drug can stay in someone’s system after the high has worn off.

So under the new law, the New York Health Department will be required to look at emerging devices that could potentially allow officers to use a saliva test to detect whether a driver is high.

When would legal marijuana sales begin?

The timeline for dispensaries to open and sales to kick off remains distant. The law doesn’t provide a specific timeline, but the first sales aren’t expected until at least 2022.

Officials must first determine how the industry will operate, from the regulation and taxation of sales to the allocation of licenses for cultivators, processors, wholesalers, retailers and delivery services.

A new state Office of Cannabis Management and Cannabis Control Board will craft and oversee the new regulations.

One 2018 analysis by The New York Times found that Hispanic people across New York City had been arrested on low-level marijuana charges at five times the rates of white people in recent years.

The imbalance was even starker for Black people, who in Manhattan were arrested at 15 times the rate of white people.

Officials hope the new law will help put an end to those disparities.

The legislation sets a goal of having 50 percent of cannabis business licenses issued to social equity applicants, defined as people from “communities disproportionately impacted by the enforcement of cannabis prohibition” as well as minority- and women-owned businesses, disabled veterans and financially distressed farmers.

Millions of dollars in tax revenue from sales will be reinvested each year in communities affected by racially disproportionate policing on drugs. A significant amount would also be steered to fund public education and drug prevention treatment.

A sizable portion of business licenses would be reserved for minority business owners, disabled veterans and distressed farmers, among others.

Finally, current medical cannabis businesses could participate in the recreational market in exchange for licensing fees that will help to fund the social equity program.

What happens to those with marijuana convictions?

New York’s new law includes expungement, too; People with certain marijuana-related convictions for activity that is no longer criminalized will have their records automatically expunged.