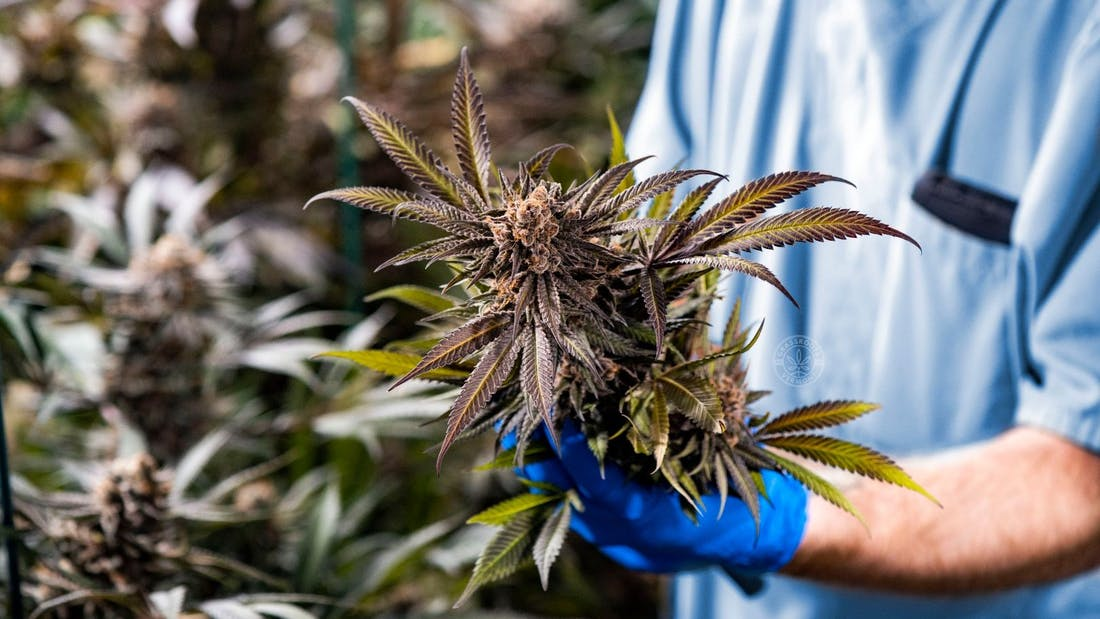 Out-of state players make their way into the Vermont medical cannabis industry, as patient numbers dwindle. A snapshot of where medical stands, and what S. 54 means for existing dispensaries.

Much anticipation is growing around S. 54, the bill to tax and regulate cannabis in Vermont, which is expected to hit the Governor’s desk this week after passing the House and Senate. But what does the new language mean for existing medical dispensaries?

If S.54 goes into effect, existing dispensaries will have somewhat of a head start in the market.

A proposed S. 54 timeline published on the Vermont General Assembly site September 16 says that integrated licensees may begin selling cannabis and cannabis products to the public on May 1, 2022. Five months later, on October 1, other retailers may begin sales.

In the language now agreed upon and passed by both the House and Senate, the Cannabis Control Board must establish a system of priorities that includes existing medical cannabis dispensaries, along with other applicant types like minority- or women-owned businesses.

Other important medical-related provisions in the bill:

The bill will give integrated licenses — or a single license that allows a business to cultivate, wholesale, produce, sell and test cannabis — only to currently licensed dispensaries. All new Vermont cannabis businesses will have to apply for individual licenses.

§ 901. (B) An applicant and its affiliates that are a dispensary registered pursuant to 18 V.S.A. chapter 86 may obtain one integrated license or a maximum of one of each type of license. An integrated licensee may not hold a separate cultivator, wholesaler, product manufacturer, retailer, or testing laboratory license.

The dispensaries would not be allowed additional, individual licenses. S.54 prohibits any person from owning or controlling more than one cannabis store, farm, or product manufacturer.

Perhaps due in part to their strenuous lobbying efforts, medical dispensaries will get a head start in the tax-and-regulate market. But will it be enough?

As advocate and attorney Dave Silberman noted in his op-ed last month, S. 54 “closes the corporate loopholes so tightly that even onerous contracts, such as franchise agreements, would not be allowed. Applicants would have to disclose the real people hiding behind their corporate veils and multiple levels of shell entities.”

Curaleaf, which now has a controlling interest in two of Vermont’s medical cannabis licenses, would only be eligible for only one “integrated” license – and in all likelihood would sell off the other license because it would not be able to open that other dispensary for adult-use sales, Silberman surmised in another op-ed in January.

Perhaps due in part to their strenuous lobbying efforts, and to the annoyance of some, medical dispensaries will get their five-month head start in the tax-and-regulate market. But will it be enough? The medical patient count has dwindled in recent years, and the program is plagued by accusations of poor oversight and moldy products.

S. 54’s stringent ownership language also runs counter to the business model that vertically integrated giants like Curaleaf have established, with its large holdings and multiple dispensaries in tax-and-reg states.

Depending on whether these companies and their large, lavishly funded legal teams can find a loophole somewhere, the Green Mountain state might not appeal so much to out-of-state operators whose ultimate goal is to grab a lion’s share of the larger market.

And the shift in oversight from DPS to the Cannabis Control Board is a big deal – it means independent testing and more stringent compliance requirements, things the medical program sorely needs.

State Sen. Jeanette White, D-Windham, one of the committee members involved in reconciling the bill over the past several weeks, told the Manchester Journal last week she’s pleased that the medical marijuana program will be placed under the new cannabis board rather than the DPS.

She added that there are provisions in the compromise that are “Clearly things that I would rather not be doing. But … if we get it started, there is a potential for making changes in the next year.”

In early 2019, Charlie Rice, CEO of PhytoScience Management Group — an organization that oversees the PhytoCare dispensary and partners with Vermont Patients Alliance — firmed up a deal with Grassroots Cannabis, an investment firm that at the time had operations in 10 other states. The deal gave PhytoCare access to funds and a broader range of expertise, Rice said.

That same spring, Grassroots Cannabis announced that it had raised $90 million to expand its business. A press release announced that at least some of the funding would go toward the Grassroots strategic partnership with Phyto Science Management Group in Vermont, to expand its cultivation and lab capacity, as well as expansion in its hemp-derived CBD business.

PhytoScience’s Rice told the Free Press in January that “there will probably be no local impact for a year or two.”

At the time, Grassroots Cannabis said, their recent funding round made them “The largest privately held cannabis company in the U.S.”

The transaction expanded Curaleaf’s presence from 18 to 23 states (including Vermont), with the combined company having affiliated operations spanning over 135 dispensary licenses, 88 operational dispensary locations, over 30 processing facilities and 22 cultivation sites with 1.6 million square feet of current cultivation capacity.

To give an idea of just how massive Curaleaf is, their expanded geographic dispensary presence now offers medical or adult use access to more than 192 million people, or roughly two-thirds of the United States population.

Anecdotally speaking, the word on the street is that Curaleaf is taking a hands-off approach, allowing Vermont dispensaries to develop their own cultivation techniques and management practices. PhytoScience’s Rice told the Free Press in January that “there will probably be no local impact for a year or two.”

iAnthus Capital owns, finances and/or partners with 30 dispensaries in 11 states, and is the major financier behind Grassroots Vermont, the medical cannabis dispensary in Brandon.  The iAnthus merger last year with a Canadian cannabis firm was valued at $1.6 billion.

Alexandra Ford founded Grassroots Vermont in 2013, with just 43 patients registered with her dispensary. In documentation from a March 2019 Williston Development Review Board Meeting, President Chris Walsh said that GrassRoots had around 700 registered patients.

A Capital 10X corporate report from 2019 says that iAnthus began its activities in Vermont in early 2015 with a loan financing and management services agreement to Grassroots Vermont, with the ability to convert its loan into a 100% equity position. iAnthus obtained a 100% equity interest in Grassroots in December 2017.

Grassroots Vermont has needed outside investment since it first opened its doors in 2013, according to Ford. In testimony to state legislators in March 2016, she argued against a proposed (and ultimately defeated) Vermont residency requirement for cannabis financiers.

Hadley Ford, Alexandra’s brother and former CEO of iAnthus Capital, submitted his resignation this past April after a special investigation uncovered $160,000 in personal loans from a managing member of one of the company’s lenders, as was first reported by Marijuana Business Daily.

A 2018 iAnthus management report said that a lease had been signed for an additional 2,400 square-foot dispensary located in Williston, an effort by Grassroots Vermont to gain a foothold in Chittenden county, the state’s most populous region. Documentation from a Williston Development Review Board meeting in April of 2019 shows that the town approved Grassroots Vermont for submission of a final plan, in a 6-0 vote.

Former Champlain Valley Dispensary employees say that CVD has contended with mold and mildew issues, while state oversight of medical cannabis quality has been minimal in comparison to other medical markets.

In Vermont, unlike other states that have legalized medical cannabis, product testing is only carried out by laboratories owned and operated by dispensaries themselves. In other states, laws mandate more stringent independent testing and cultivation standards.

While CVD conducts in-house testing on its products, its tests focus on the potency of cannabinoids, like THC. The dispensary does not test for contaminants.

Many states, including Florida, California, Washington, Colorado and Connecticut, require third-party testing of cannabis dispensary products. In these states, independent testing for contaminants such as fungus, pesticides, herbicides and other foreign substances is mandatory.

Mold and mildew contamination is, by all accounts, a chronic and common problem for cannabis cultivators across the country, with industry experts searching for ways to mitigate infestations.

They reviewed information compiled the previous fall by the Agency of Agriculture, Food and Markets but “determined there was no appropriate criminal investigation or charges based on the facts of the case” and instead VSP referred the matter to the Vermont Crime Information Center — which directly oversees the medical marijuana registry — for regulatory review.

Both state police and the crime info center are divisions within the Vermont Department of Public Safety, which is responsible for regulating the state’s medical marijuana program. Since dispensaries first opened in the state in 2013, the department has never suspended or terminated one’s certificate to operate.

Vermont’s medical cannabis market has been legal since 2004, but it still hasn’t seen full revenue potential, weighed down by DPS oversight and strict policies early on such as dispensary plant limits for each registered patient.

The passage of personal adult use cultivation in 2018 put another nail in the coffin.

The passage of personal adult use cultivation in 2018 put another nail in the coffin. Vermont’s patient enrollment began to fall after its peak enrollment in 2018, according to data from BDS Analytics and Arcview Market Research. Meanwhile, dispensary sales dipped between 25%-30% during that period.

At its peak, the state’s medical cannabis market clocked 5,700 registered patients. That number had fallen to less than 4,700 by February of this year.

Champlain Valley Dispensary Executive Director Shayne Lynn told Cannabis Dispensary Mag that he blamed the drop in patient count on a vape-related health scare in the fall of 2019, which he said raised alarms over the untested cannabis marketplace.

The Green Mountain State generated $20 million in medical sales in 2018, BDS Analytics and Arcview Market Research reported. That figure is forecasted to dip to $17 million by 2024 – though depending on how things go in Vermont, new projections may soon be needed.

With a history of poor oversight in areas like testing and compliance, it’s little wonder that Vermont’s medical program has struggled in the past. The new tax and regulate bill will subject medical dispensaries to more stringent regulations and, for the very first time, require independent testing. As Sen. White noted last week, this is a very good thing – and worth keeping a close eye on if the legislation gets the Governor’s signature.