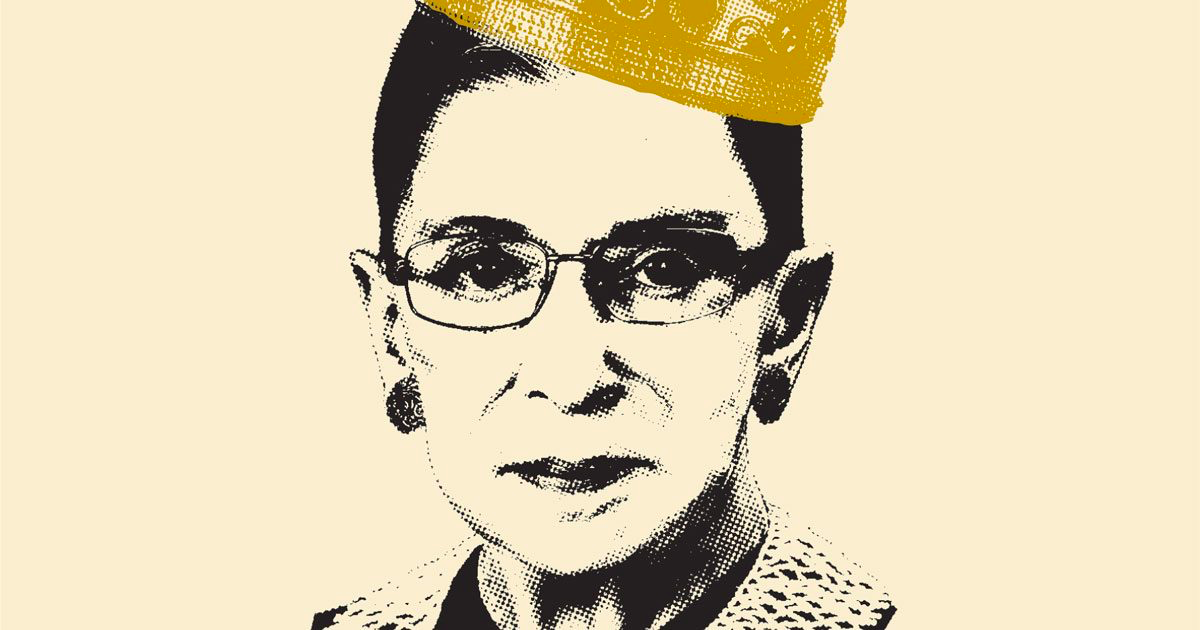 Born just 13 years after the ratification of the Nineteenth Amendment to the Constitution, Ginsburg bore witness to, argued for, and helped to constitutionalize one of the most hard-fought and least-appreciated revolutions in modern American history: the gender equality movement.

The second woman to serve on the Supreme Court, and first Jewish female justice, Ginsburg is remembered for her continued effort to advance rights through her progressive court opinions, and for her scathing dissents, as well as her own work as a lawyer and professor in serving as a champion of equality between the sexes.

Despite graduating first in her class and with glowing recommendations from her professors, no one wanted to hire Ginsburg out of law school. In an interview with CBS Sunday Morning, she said, “I had three strikes against me: one, I was Jewish. Two, I was a woman. But the killer was I was a mother of a four-year-old child.”

Ginsburg couldn’t get her foot in the door for a clerkship with a federal judge. Instead, she began her career with lower-ranking district court judge, Edmund Palmieri.

Essentially Judge Palmieri had to be warned in order for Ginsburg to snag the role – Her mentors threatened to stop sending clerks his way if he turned her down. Ginsburg would go on to teach at Rutgers University Law School from 1963 to 1972 and at Columbia from 1972 to 1980.

Ginsburg was growing into a leading figure in gender-discrimination litigation.

In 1970 Ginsburg had become professionally involved in the issue of gender equality when she was asked to introduce and moderate a law student panel discussion at Rutgers on the topic of “women’s liberation.” In 1971 she published two law review articles on the subject and taught a seminar on gender discrimination. 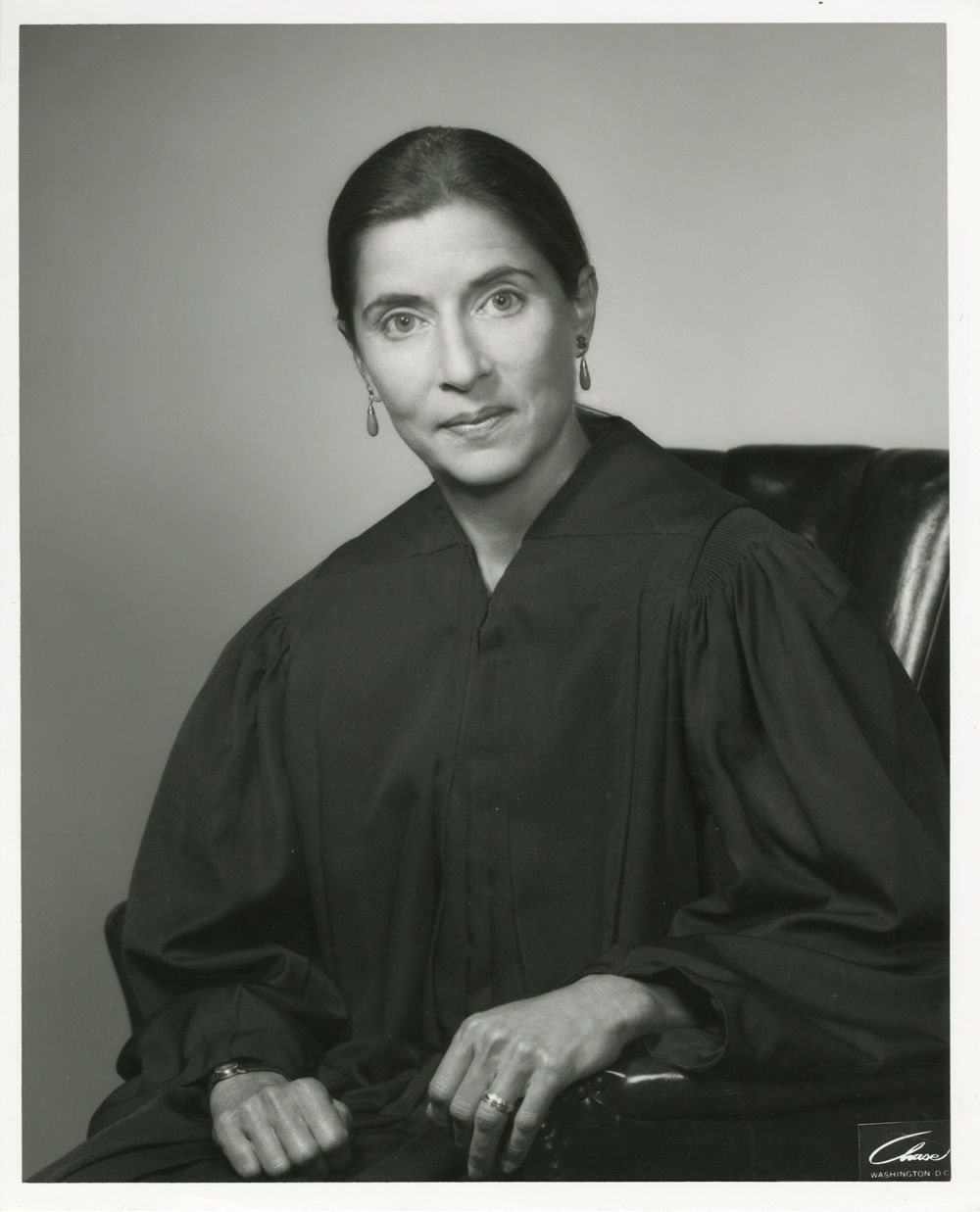 As a part of the course, Ginsburg partnered with the American Civil Liberties Union (ACLU) to draft briefs in two federal cases. The first involved a provision of the federal tax code that denied single men a tax deduction for serving as caregivers to their families.

The second involved an Idaho state law that expressly preferred men to women in determining who should administer the estates of people who die without a will. The U.S. Supreme Court’s decision in the latter case, Reed v. Reed (1971), was the first in which a gender-based statute was struck down on the basis of the equal protection clause.

Ginsburg was growing into a leading figure in gender-discrimination litigation. In 1972 she became founding counsel of the ACLU’s Women’s Rights Project and coauthored a law-school casebook on gender discrimination. In the same year, she became the first tenured female faculty member at Columbia Law School.

During the 70s, she argued before the Supreme Court six times, winning five cases.

Ginsburg authored dozens of law review articles and drafted or contributed to many Supreme Court briefs on the issue of gender discrimination. During the 70s, she argued before the Supreme Court six times, winning five cases. 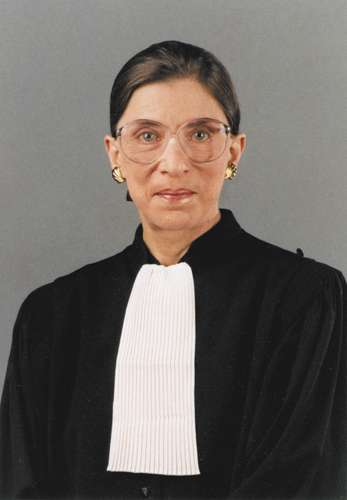 In 1980 Democratic U.S. Pres. Jimmy Carter appointed Ginsburg to the U.S. Court of Appeals for the District of Columbia Circuit in Washington, D.C. While serving as a judge on the D.C. Circuit, Ginsburg developed a reputation as a pragmatic liberal with a keen attention to detail. She enjoyed cordial professional relationships with two well-known conservative judges on the court, Robert Bork and Antonin Scalia, and often voted with them.

In 1993 she delivered the Madison Lecture at New York University Law School, offering a critique of the reasoning—though not the ultimate holding—of Roe v. Wade (1973), the famous case in which the Supreme Court found a constitutional right of women to choose to have an abortion.

Ginsburg’s argument was that the Court should have issued a more limited decision, which would have left more room for state legislatures to address specific details. Such an approach, she claimed, “might have served to reduce rather than to fuel controversy.”

Justice Ginsburg was nominated in 1993 to the highest court by President Bill Clinton, a Democrat, and approved by a bipartisan Senate.

During her tenure as Supreme Court Justice, she led the court in landmark decisions that expanded the rights of women.

In 1996, as a relatively new Supreme Court justice, Ginsburg wrote the court’s 7-1 opinion declaring that the Virginia Military Institute could not remain an all-male institution. True, Ginsburg said, most women — indeed most men — would not want to meet the rigorous demands of VMI. But the state, she said, could not exclude women who could meet those demands.

“Race-based voting discrimination still exists. This Court’s decision is like throwing away your umbrella in a rainstorm because you are not getting wet.”

“Reliance on overbroad generalizations … estimates about the way most men or most women are, will not suffice to deny opportunity to women whose talent and capacity place them outside the average description,” Ginsburg wrote.

In her minority opinion for Ledbetter v. Goodyear in 2009, she wrote, “The Court does not comprehend, or is indifferent to, the insidious way in which women can be victims of pay discrimination.”

In 2013’s Shelby County v. Holder, which watered down voters’ rights, she wrote the dissent.

“Race-based voting discrimination still exists,” Ginsburg wrote. “This Court’s decision is like throwing away your umbrella in a rainstorm because you are not getting wet.”

On the Court, Ginsburg became known for her active participation in oral arguments and her habit of wearing jabots, or collars, with her judicial robes, some of which expressed a symbolic meaning. She identified both a majority-opinion collar and a dissent collar, the latter of which she bore often and fiercely in her later years.

On one occasion in 2016, Ginsburg got herself into trouble and later publicly apologized for disparaging remarks she made about then-presidential candidate Trump. But for the most part Ginsburg enjoyed her fame and maintained a sense of humor about herself.

As the court grew more conservative, and she herself battled cancer (four times), she became widely known for her often-cutting dissents.

During Ginsburg’s final two decades on the court, she fought colon cancer, which was first diagnosed in 1999, pancreatic cancer in 2009, underwent heart surgery in 2014, suffered injuries from falls in 2012 and 2018, underwent surgery for malignancies on her left lung in 2018, and had radiation when pancreatic cancer returned last year. She rarely missed a day in court.

In an interview last year for NPR, Justice Ginsburg dryly noted, “There was a senator who announced, with great glee, that I was going to be dead within six months. That senator, whose name I’ve forgotten, is now himself dead.”

Ginsburg also regrettably, and presumably thinking Hillary Clinton would defeat Trump in 2016, resisted calls to retire during Obama’s second term, when he could have appointed a liberal Justice as her successor.

“There was a senator who announced, with great glee, that I was going to be dead within six months. That senator, whose name I’ve forgotten, is now himself dead.”

At just 5’1″ tall, it was her seemingly superhuman ability to survive that made her a cultural icon, and perhaps the most recognized justice in the Court’s history.

The pleasure Ginsburg took in her own celebrity, as she became a feminist icon, is understandable if also somewhat troubling. Historically, the Court is meant to be insulated from public opinion, requiring that justices lead largely private lives.

And she came to regret the changes to the Court itself, as extreme polarization transformed the nomination and confirmation process. “I wish I could wave a magic wand and have it go back to the way it was,” she said in 2018, after the Kavanaugh hearings.

But there is no going back. The Supreme Court, like much of the rest of the federal government, is at risk of becoming a tool of the executive branch rather than a check against it. Preserving the Court’s independence and core ideals will require courage and conviction of Ginsburgian force.

A century after the ratification of the Nineteenth Amendment, Ruth Bader Ginsburg’s pioneering career as a scholar, advocate, and judge stands as a monument to the power of dissent. The natural sensibilities of the female sex evidently make it unfit for many of the occupations of civil life. It’s taking centuries, and millions of women, to dismantle those notions, which are built into the foundation of our very society.

And no single one of them was more important than Ginsburg, a giant in a tiny body, warm-hearted, razor-sharp, and dauntless.