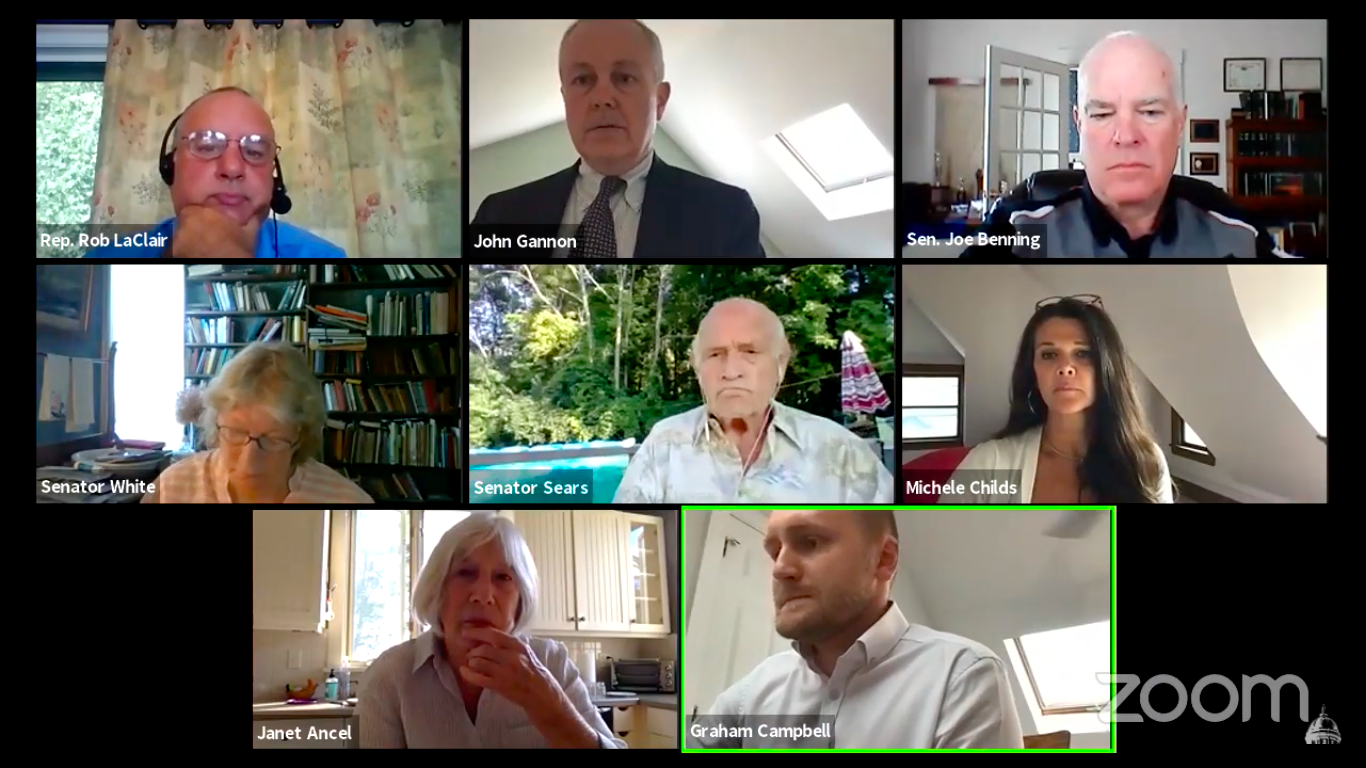 As Vermont lawmakers continued their efforts yesterday to hammer out a deal on legislation to establish an adult use market for cannabis, leaders from the Judiciary Committees in both chambers agreed to move forward on a bill to facilitate automatic expungements of prior cannabis convictions.

The measure would automatically expunge the criminal records of those convicted of possession of two ounces of cannabis or less.

To reiterate, on expungement: VT Senate and House judiciary chairs agreed to advance automatic expungement (S.294) of all prior cannabis possession convictions for 2 oz and under. This is a big deal!

Monday’s meeting, however, mainly focused on cannabis tax revenue, with lawmakers from both chambers discussing updated estimates about how much the state could potentially take in under the House and Senate bill, and how soon. The analyses were conducted by the Joint Fiscal Office (JFO), who joined for the first part of the meeting.

Sen. Dick Sears, the chief sponsor of the S. 54 as well as the chair of the body’s Judiciary Committee, said during the meeting that he felt the initial JFO estimates were much too low and that they “way underestimated the income” from cannabis sales. However, those figures were revised and updated shortly after the meeting.

The JFO also created a chart that normalized populations in other legal cannabis states, and applied that model to the House’s proposed tax rates: 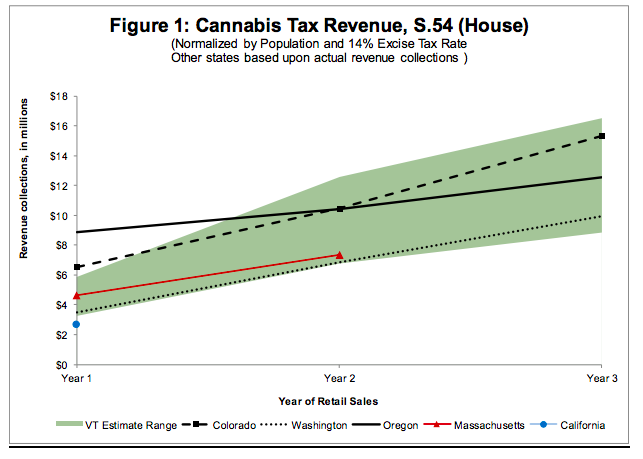 While the conference committee dedicated significant time at the start to talking about economic forecasts for each chamber’s respective bills, Sen. Joe Benning emphasized that tax revenue “was never the main reason for going through this system” of approving cannabis tax and regulate legislation.

“We have the highest consumption rate per capital in this country. All of that is coming from underground and cross border sales,” he said. “We want a place for people to purchase a safe product that has to be monitored. Those are the main objectives for this program, not the number of dollars that we will see.”

Sears agreed, stressing that the reform “is more about consumer safety than it is about revenue.”

Sen. Benning: We have the highest consumption rate per capital in this country. All of that is coming from underground and cross border sales.
We want to give a safe place for people to get product benefit of education and prevention. The purpose of this is not to drive revenue

In the broader tax and regulate negotiations that followed revenue discussions after a short break, the Senate yesterday agreed to 37 of the House’s proposals, while disagreeing with 12 others. On several measures, it offered compromises that the House will be able to weigh in on when it issues its response next week.

Readers can find the full documentation on those proposals below, as well as a link to all supporting documents from the meeting.

“What we have done is given in many areas, we’ve agreed with the House,” Sen. Sears said. “There’s about eight areas where we’re apart. I won’t insult anybody that they’re not major issues, but we are actually much closer than many would believe. So we could get this done.”

Legislators are hoping to come to a resolution and finalize the bill during their next meeting on August 31, when the House will deliver counter-offer to the Senate. If agreed upon, the panel would still have to get authorization to sign the conference report from the Joint Rules Committee. Then the unified proposal would go back to both chambers for a final vote on sending it to Gov. Phil Scott.

“I appreciate the Senate’s work here in agreeing to many of our positions. I do think we have covered a lot of ground and reached agreement on many things,” Rep. John Gannon, who chairs the House Committee on Government Operations, said in a statement to Marijuana Moment yesterday. However, “there are some areas that are deeply important to the House where we’re still in disagreement,” specifically concerning highway safety.

The House and Senate have approved separate versions of the bill to create a taxed and regulated cannabis market, and the bicameral conference committee, composed of key lawmakers from each chamber, is now working on the final version.

The conference committee kicked off with its first meeting last week, in which lawmakers debated issues such as which regulatory body should be responsible for overseeing the state’s existing medical cannabis program, distribution of tax revenues, municipal opt-in versus opt-out, pot businesses and reporting requirements for regulators in charge of overseeing the industry.

The August 19 meeting was at times heated, with a disagreement over the House’s primary – and unrelated – seatbelt enforcement measure threatening to upend negotiations.

There’s also continuing disagreement over other policies such as House proposals to ban cannabis products containing more than 30 percent THC (and 60% for concentrates), and allowing roadside testing of saliva for impaired driving.

The House-passed seatbelt provision, which would allow police to pull over drivers for not wearing them, also remained a strong point of contention in yesterday’s meeting. Sen. Sears reiterated that the Senate side would not budge on this issue. Saliva testing components would also be a “tough sell,” he said.

Sen. Sears: None of the three of us on the Senate can support seat belt provision.

Expungement in Vermont: Where it Stands

Cannabis expungement already passed the Senate in a larger expungement bill, S.294, earlier this year. It would also decriminalize possession of up to two ounces of the substance. Currently, possession of only up to one ounce is legal.

According to the Crime Research Group, an organization that keeps statistics and does analysis on criminal justice trends in Vermont, before cannabis possession was partially decriminalized in 2013, the state’s courts handed down an average of 500 convictions per year for possession of two ounces or less. Though there is no official number on how many automatic expungements would result, the number is likely in the thousands.

On top of this, the Senate also approved a bill in June that would double the amount of cannabis that can be possessed and grown without the threat of jail time.

Join Heady Vermont for a live tweet session of the next meeting on August 31. Stay tuned and check out our cannabis events page for details.

Check out the Senate Conference Proposal to the House on S.54 below. You can find a full list of all documents from the meeting on the Vermont General Assembly website.