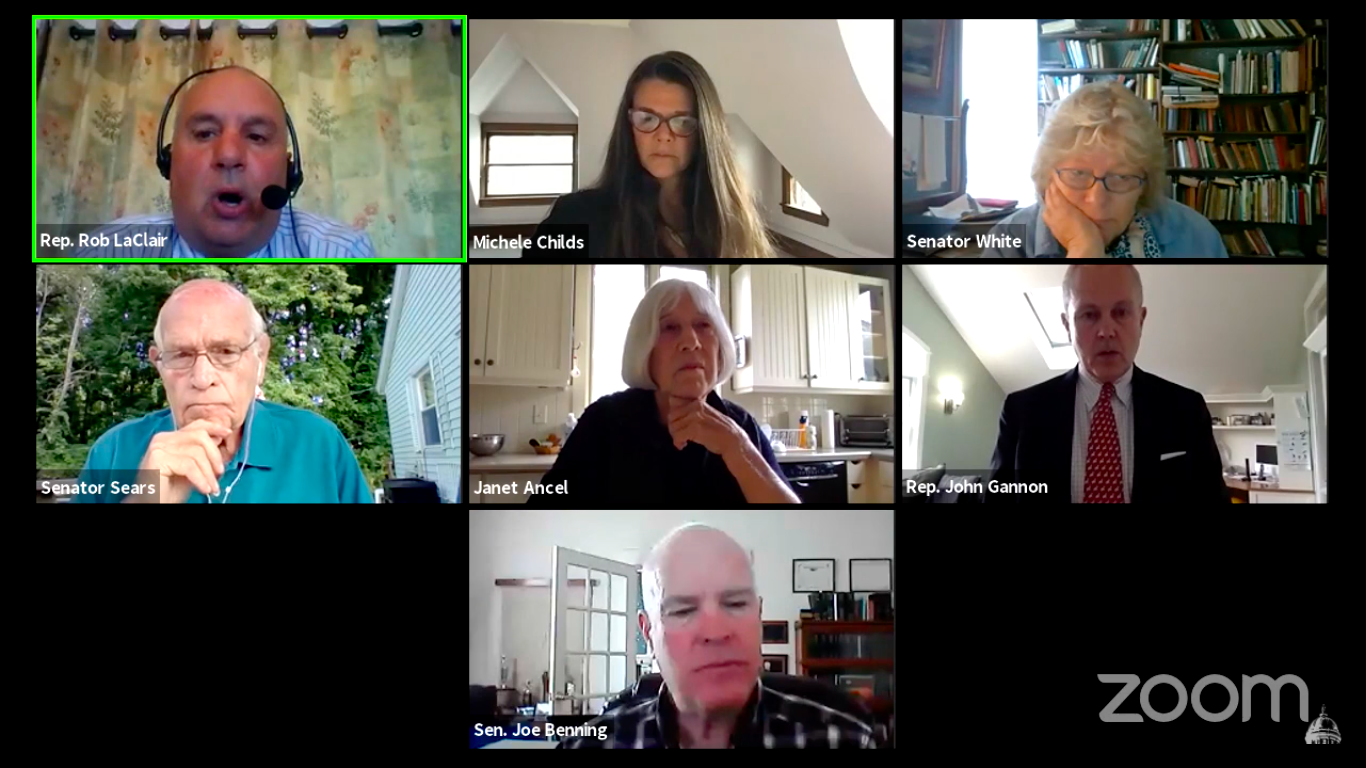 Vermont lawmakers met Wednesday to resume their work on the bill that would create an adult use cannabis market in the state. The hottest areas of debate in the first of three committee meetings, which was at times contentious, were whether towns should be able to opt out of sales, and a seat belt highway safety provision added by the House.

The House and Senate have approved separate versions of the bill, and the conference committee, composed of key lawmakers from each chamber, is now working on the final version. The next two meetings will take place August 24 and 31.

Wednesday’s meeting revealed which areas of the legislation still need to be ironed out between the two chambers. There were additional concerns about which regulatory body should be responsible for overseeing the state’s existing medical program, how tax revenues would be distributed, municipal decision-making on cannabis businesses and reporting requirements for regulators charged with overseeing the industry.

The committee also debated whether to allow saliva testing of drivers, a hot button issue. Gov. Phil Scott has made clear that he will not sign a tax and regulate bill without this provision.

One of the most contentious topics was that the House wants “primary enforcement” of mandatory seatbelt use, a proposal that has been a source of controversy in the Vermont legislature over the past several years. A full transcript from that portion of the meeting is included below in this post.

Senate committee members called it a “deal breaker” for them, pointing out racial justice issues and that a seatbelt provision has nothing to do with a taxed and regulated cannabis market.

“In the middle of Black Lives Matter conversations, [the seat belt provision] does exactly the opposite of what we would hope a bill like this would be doing — to bring some sort of racial justice into this picture.”

“In the middle of Black Lives Matter conversations, [the seat belt provision] does exactly the opposite of what we would hope a bill like this would be doing — to bring some sort of racial justice into this picture,” said Sen. Joe Benning. “This is absolutely a deal breaker for me.”

House committee members offered little in the way of explanation, other than saying that it was a “public safety measure,” a House priority, and that there was a language requiring traffic safety data to be gathered over the next three years, so “we’re looking at it.”

Members broke up for private intra-chamber meetings to consider paths forward in the conference negotiations after the initial discussion. When the full panel reconvened, Sears made a few proposals on behalf of the Senate to move closer to consensus.

There is still significant disagreement over local control provisions, however, with Sears saying the sides are “nowhere near any agreement.” The House version says that jurisdictions have to proactively opt in to allowing cannabis businesses to operate in their area, whereas the Senate favors businesses being allowed to operate by default, with municipalities having the choice to opt out.

The committee’s senators said they need to poll their chamber to get a sense of how to proceed on the House’s saliva testing proposal.

House members of the committee didn’t have much to say after their private meeting, but they noted that the coronavirus pandemic might warrant changing the bill to push back the implementation timeline. Rep. John Gannon also said that the chamber is interested in finding a way to reduce the deficit that will result from initial costs, perhaps by requiring earlier payment of licensing fees.

“I’m pleased that the conference committee was finally able to meet today, and that they were able to resolve several of the outstanding issues,” attorney and pro bono drug policy reform advocate Dave Silberman told Marijuana Moment yesterday. “I’m confident that, if conferees continue to negotiate in good faith without interference, the remaining issues will be resolved as well, given that Vermonters overwhelmingly support establishing a regulated cannabis market.”

Meanwhile, a coalition of farm and racial justice groups has come out against the legislation. The coalition includes Justice for All, the Northeast Organic Farming Association of Vermont, the Vermont Growers Association, Rural Vermont, and Trace. The coalition insists that, even with reconciliation of the House and Senate versions not yet complete, lawmakers should throw out the bill, start over again, and address issues affecting local agriculture and racial equity.

“Before we allow wealthy, out-of-state, majority-white business owners to be profiting off this crop, we really need first and foremost to focus on the harms that have been done and continue to be perpetuated on primarily BIPOC folks.”

Maddie Kempner, policy director for NOFA, told VPR news yesterday: “Before we allow wealthy, out-of-state, majority-white business owners to be profiting off this crop, we really need first and foremost to focus on the harms that have been done and continue to be perpetuated on primarily BIPOC folks.”

On a separate note, the Senate approved a bill in June that would double the amount of cannabis that can be possessed and grown without the threat of jail time. There is also currently a separate expungement bill in the Senate Judiciary Committee that would expunge the records of people previously convicted for possession of under two ounces of cannabis.

Meanwhile, in a draft platform for 2020, the Vermont Democratic Party included planks to decriminalize drug possession and legalize cannabis sales.

Join Heady Vermont for a live tweet session of the next meeting on August 24.

Sen. Dick Sears, D-Bennington: “I find it very troubling that this was added to the bill by the other body and I know I can’t get it through Senate Transportation so this is a huge stumbling block for the Senate. I’m disappointed and also … you know we’re getting complaints about equity and racial justice and etc and I think this just adds to the number of stops that occur … that’s just from a personal perspective.”

Sen. Joe Benning, R-Caledonia: “It’s not just your personal perspective, Dick. I’m pretty sure I’m the only person practicing criminal law on the screen here today. A police officer does not need another reason to pull over a car, and in the middle of Black Lives Matter conversations this does exactly the opposite of what we would hope a bill like this would be doing — to bring some sort of racial justice into this picture… This is absolutely a deal breaker for me.”

Sen. Jeanette White D-Windham: “I understand that there’s strong feeling by people both in the House and the Senate that we should have primary seat belts, probably fewer in the Senate than in the House I’m not sure … This is a cannabis regulation and taxation bill. That’s what this bill is about. There are 150 different public safety things that could have been added in here that have nothing to do with cannabis regulation or taxation, and this has nothing to do with cannabis taxation and regulation. So I find it just a little unsettling. We could start putting all kinds of wish list things in here that deal with public safety that really have nothing to do with the core of the bill, and so I find it not not well taken.”

Rep. John Gannon, D-Windham:  “Well I’m sorry you feel that way. This is a critical position for the House. You know a primary seat belt law increases seat belt usage by 14 percent and reduces fatalities by eight percent, and addressing Joe’s concern –”

Sen. Sears (interrupting Rep. Gannon): “Oh there’s no point in us continuing to meet if this is if this is a deal breaker. We can all go back to our regular stuff because we’re not going to agree to see primary seat belt in this bill, so I just want to let you know that I don’t want to waste everybody’s time continuing discussion here. We can talk about all the other differences and everything else, but this is a deal breaker for us, so if the House is going to insist on this provision then we might as well walk away today.”

Sen. White: “Can I ask a question of the House members?”

Sen. White: “So I do understand that there are that people feel that primary seat belts, they save lives, we know that there might be a bump –”

Sen. Sears (interrupting Sen. White): “I don’t think we should be debating the issue. I think we’re already – I think I’ve made this clear, and rather than debate, Jeanette, I don’t see a point to it.”

Sen. White: “I’m not trying to debate. What I’d like to understand from them is how this relates to the core of the bill and why you felt that this was the place to put this because it has nothing – whether or not you agree that it should be asked – why in this particular bill that has nothing to do with cannabis. Why?”

Rep. Gannon: “Because that’s my question –  it goes to our concern about highway safety which is this bill and I mean to address Joe’s concern about the fact that we may stop more people of color. I mean we also have a provision in there reporting on traffic stop data around safety belt enforcement for the next three years so we are looking at that.”

Sen. Benning: “John, in all fairness this is like me asking to plug in a bill to get rid of the mandatory motorcycle helmet law, right? I can use statistics to demonstrate that Vermont’s fatality rate on motorcycles is higher than the other four states in New England. It’s totally irrelevant to whether there should be a tax and regulated system for cannabis. But we go down this road, and I have to tell you as a criminal defense attorney, a police officer late at night will look for any reason they need to in order to pull a car over – and I’m not trying to belittle police by any stretch.

Once you open this door you are going to radically increase the number of stops because people aren’t wearing their seat belts, whether they’re impaired or not, are going to get pulled over and you have to take that into account immediately. You don’t have to wait three years for data to come in. That’s just common knowledge in the criminal defense bar and you can bring in any defense attorney – if a police officer has a reason to pull over a car it could be their license plate light is out you’re adding to the reasons that they use to pull over a car. That’s going to have an impact especially on people of color who are coming here from out of state that may not have their seatbelt on when they do. I don’t think we want to go there in a bill that deals with taxing and regulating marijuana usage.”

Wrapping up the debate with Rep. LaClair’s meager two-sentence defense, the committee agreed to move on from the issue.