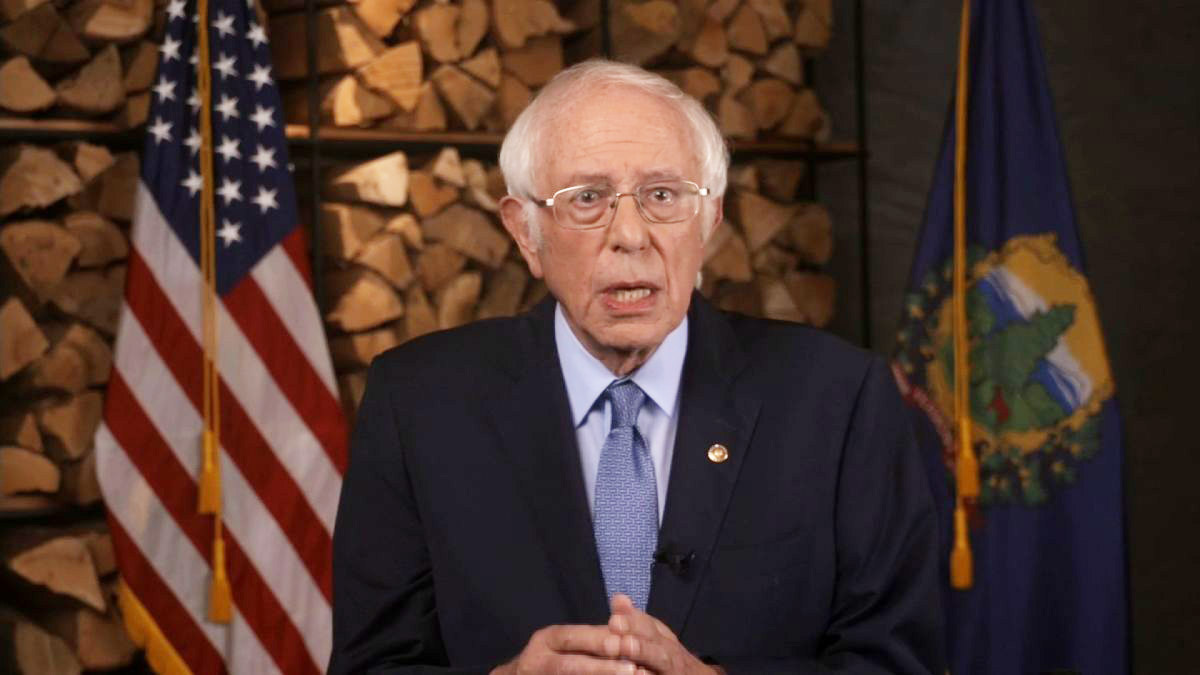 In a searing address to the kickoff of the Democratic National Convention on Monday, Vermont Senator Bernie Sanders railed against the rise of authoritarianism under Trump, and made an impassioned plea to his supporters to vote for Democratic nominee Joe Biden in November.

“Under this administration authoritarianism has taken root in our country. I and my family and many of yours know the insidious way authoritarianism destroys democracy, decency and humanity,” Sanders said. “As long as I am here, I will work with progressives, with moderates, and, yes, with conservatives to preserve this nation from a threat that so many of our heroes fought and died to defeat.”

Sen. Sanders, mincing no words, bluntly described President Trump’s total failure to contain the ongoing coronavirus pandemic, the death toll of which now stands at more than 170,000 human lives in the United States.

“Nero fiddled while Rome burned. Trump golfs,” he said. “His actions fanned this pandemic resulting in over 170,000 deaths and a nation still unprepared to protect its people.”

When Sanders dropped out of the Democratic Primary race in April, he endorsed Joe Biden a week later. Since then, he’s consistently supported his former rival, forming several task forces between their teams to hash out recommendations in key areas like health care and the climate crisis.

We must come together, defeat Donald Trump and elect Joe Biden and Kamala Harris as our next president and vice president. My friends, the price of failure is just too great to imagine. #DemConvention

Vermont Sen. Bernie Sanders addressed Democrats on Aug. 17 during the first night of the Democratic National Convention, which is scheduled to run through Thursday. Kasich ran for the Republican presidential nominee in 2016 but lost it to Donald Trump. The coronavirus pandemic upended both parties’ traditional conventions. Instead of in-person events, the program each night features a number of speakers and musical performances virtually across the country.

Watch Sen. Sanders’ full speech below, or read the transcript (as prepared for delivery).

Good evening. Our great nation is now living in an unprecedented moment.

We are facing the worst public health crisis in 100 years and the worst economic collapse since
the Great Depression. We are confronting systemic racism and the enormous threat to our planet
of climate change. And, in the midst of all of this, we have a president who is not only incapable
of addressing these crises but is leading us down the path of authoritarianism.

This election is the most important in the modern history of this country. In response to the
unprecedented crises we face, we need an unprecedented response—a movement, like never
before, of people who are prepared to stand up and fight for democracy and decency—and
against greed, oligarchy, and bigotry.

And we need Joe Biden as our next president.

Let me take this opportunity to say a word to the millions who supported my campaign this year
and in 2016. My friends, thank you for your trust, your support, and the love you showed Jane,
me, and our family.

Together we have moved this country in a bold new direction showing that all of us—Black and
white, Latino, Native American, Asian American, gay and straight, native born and immigrant—
yearn for a nation based on the principles of justice, love, and compassion.

Our campaign ended several months ago, but our movement continues and is getting stronger
every day. Many of the ideas we fought for, that just a few years ago were considered “radical,”
are now mainstream. But, let us be clear, if Donald Trump is re-elected, all the progress we have
made will be in jeopardy.

Defending Democracy
At its most basic, this election is about preserving our democracy. During this president’s term,
the unthinkable has become normal. He has tried to prevent people from voting, undermined the
U.S. Postal Service, deployed the military and federal agents against peaceful protesters,
threatened to delay the election and suggested that he will not leave office if he loses. This is not
normal, and we must never treat it like it is.

Under this administration authoritarianism has taken root in our country. I, and my family, and
many of yours, know the insidious way authoritarianism destroys democracy, decency, and
humanity. As long as I am here, I will work with progressives, with moderates, and, yes, with
conservatives to preserve this nation from a threat that so many of our heroes fought and died to
defeat.

The Pandemic
This president is not just a threat to our democracy, but by rejecting science, he has put our lives
and health in jeopardy. Trump has attacked doctors and scientists trying to protect us from the
pandemic, while refusing to take strong action to produce the masks, gowns, and gloves our
health care workers desperately need.

Nero fiddled while Rome burned; Trump golfs. His actions fanned this pandemic resulting in
over 170,000 deaths and a nation still unprepared to protect its people.

The Economic Crisis
Furthermore, Trump’s negligence has exacerbated the economic crisis we are now experiencing.
Since this pandemic began, over 30 million people have lost their jobs and many have lost their
health insurance. Millions of working families are wondering how they’ll feed their kids and
worried that they will be evicted from their homes.

And how has Trump responded? Instead of maintaining the $600 a week unemployment
supplement that workers were receiving, and the $1,200 emergency checks that many of you
received, instead of helping small businesses—Trump concocted fraudulent executive orders that
do virtually nothing to address the crisis while threatening the very future of Social Security and
Medicare.

Trump the Fraud
My friends, the American people have caught on that this president and his administration are, to
put it bluntly, frauds.

In 2016, Trump promised he would stand with working families. He said that he would “drain
the swamp,” take on Wall Street and powerful special interests. He would protect Social
Security, Medicare, and Medicaid and, by the way, he would provide health care to “everybody.”

Well. None of it was true.

Instead, he filled his administration with billionaires and gave trillions to the top 1 percent and
large corporations. He tried to throw 32 million people off of their health insurance, eliminate
protections for pre-existing conditions, and submitted budgets that proposed slashing Medicaid,
Medicare, and Social Security.

Joe Biden
But the truth is that, even before Trump’s negligent response to this pandemic, too many
hard-working families have been caught on an economic treadmill with no hope of ever getting
ahead. Together we must build a nation that is more equitable, more compassionate and more
inclusive.

I know that Joe Biden will begin that fight on day one.

Let me offer you just a few examples of how Joe will move us forward.

Joe supports raising the minimum wage to $15 an hour. This will give 40 million workers a pay
raise and push the wage scale up for everyone else.

Joe will also make it easier for workers to join unions, create 12 weeks of paid family leave, fund
universal pre-K for 3- and 4-year olds, and make child care affordable for millions of families.
Joe will rebuild our crumbling infrastructure and fight the threat of climate change by
transitioning us to 100 percent clean electricity over the next fifteen years. These initiatives will
create millions of good paying jobs all across the country.

As you know, we are the only industrialized nation not to guarantee health care for all people.
While Joe and I disagree on the best path to get to universal coverage, he has a plan that will
greatly expand health care and cut the cost of prescription drugs. Further, he will lower the
eligibility age of Medicare from 65 to 60.

And to heal the soul of our nation, Joe Biden will end the hate and division Trump has created.
He will stop the demonization of immigrants, the coddling of white nationalists, the racist dog
whistling, the religious bigotry, and the ugly attacks on women.