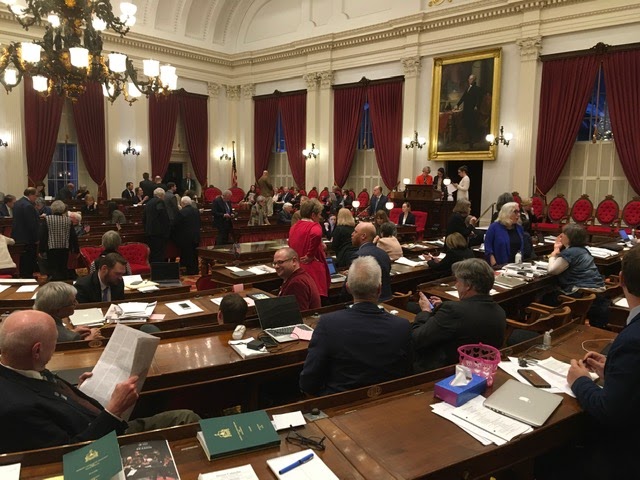 Staff Update: On Thursday, February 27, the House advanced S.54 by voice vote. It now moves to the senate.

MONTPELIER, Vermont — On Wednesday evening, in a landmark vote, the Vermont House voted pass S.54, the bill to legalize, regulate and tax cannabis sales for adults 21 and older. Members of the House voted 90-54.

Check out Heady Vermont’s live S.54 tweet sesh from the Statehouse on Wednesday, February 26 here – Follow us for future updates.

“It’s time for cannabis use to come out into the light of day,” said Rep. Mari Cordes (D-Lincoln). “S.54 creates a strong structure to incentivize small cultivators and retailers, encourage renewable energy, and protect Vermonters from the multiple harms of the illicit market. This bill, combined with current expungement work, will decrease harm to marginalized communities related to cannabis.”

“This bill, combined with current expungement work, will decrease harm to marginalized communities related to cannabis.”

On Monday, S.54 cleared the House Appropriations Committee by a narrow margin of 6-5 in favor of advancing the bill to the House floor. Before passing, the committee added an amendment reducing the number of people on the Cannabis Control Board to three full-time members.

Early on Wednesday morning, before hitting the House floor, S.54 went to the Ways and Means Committee, where it saw several changes. Most notably, Rep. John Gannon (D-Wilmington) added an amendment which changed the definition of a small cultivator, increasing square footage from 500 to 1,000.

The amendment also capped the total THC in edibles packages at 50mg, down from 100mg, one of the most stringent in the country. The standard serving size remains the same, at 5mg per serving. Finally, the changes require cannabis pesticides to comply with Vermont Agency of Agriculture, Food and Markets standards for other crops.

Rep. Gannon’s amendment passed out of committee 7-3 and was confirmed on the floor by a near-unanimous voice vote.

“Today’s vote to pass S.54 marks a historic moment: Both chambers of Vermont’s legislature have agree that the ‘War on Drugs’ approach to cannabis has failed, and that regulating its commercial production and sale is better for consumers, better for public safety, and better for our rural economy,” said Dave Silberman, attorney and pro bono legalization advocate.

“We feel the five-month head start is unfair because it lets corporate America work its way into the Vermont cannabis market.”

Several organizations and constituents expressed reservations against parts of the bill, including provisions concerning roadside saliva testing, 30% and 60% caps on THC in flower and concentrates, and existing dispensaries getting a five-month head start on retail sales.

“We feel the five-month head start is unfair because it lets corporate America work its way into the Vermont cannabis market,” says Justin Lang of Farm Fresh Hemp. “Vermont was founded on craft products,” says Lang, “and when you give more opportunity to corporations than to local producers, it leaves a very bad taste in the mouth of Vermonters.”

While S.54 does prioritize small growers in the preliminary licensing process, who will be able to sell their products to the dispensaries, Lang feels the arrangement still gives the dispensaries the upper hand.

“The amount of representation the small growers will have in the eyes of the public is less than the dispensaries, and what they’ll be able to produce is less than what the dispensaries will have. It’s unfair and sickening,” says Lang, “that VT would make equal comparisons between corporate growers and small growers. We’re feeling shafted compared to corporate America.”

Opposition to S.54 is not limited to growers. Consumer Zane McCann was particularly troubled by the THC limits in the bill. “The 60% THC limit for concentrates would restrict all of the solventless concentrates that I prefer to consume,” says McCann. “This would also restrict an entire product type, and processor type, hash-making/rosin making as the test results on these extracts often exceed 85%.”

S. 54 will now be scheduled for a final House vote, which is expected tomorrow. If it passes there, it will return to the Senate, which has already approved a different version of the bill in a 23-5 vote. The House and Senate will have to agree on a final version of the bill before it can proceed to Gov. Phil Scott’s desk.