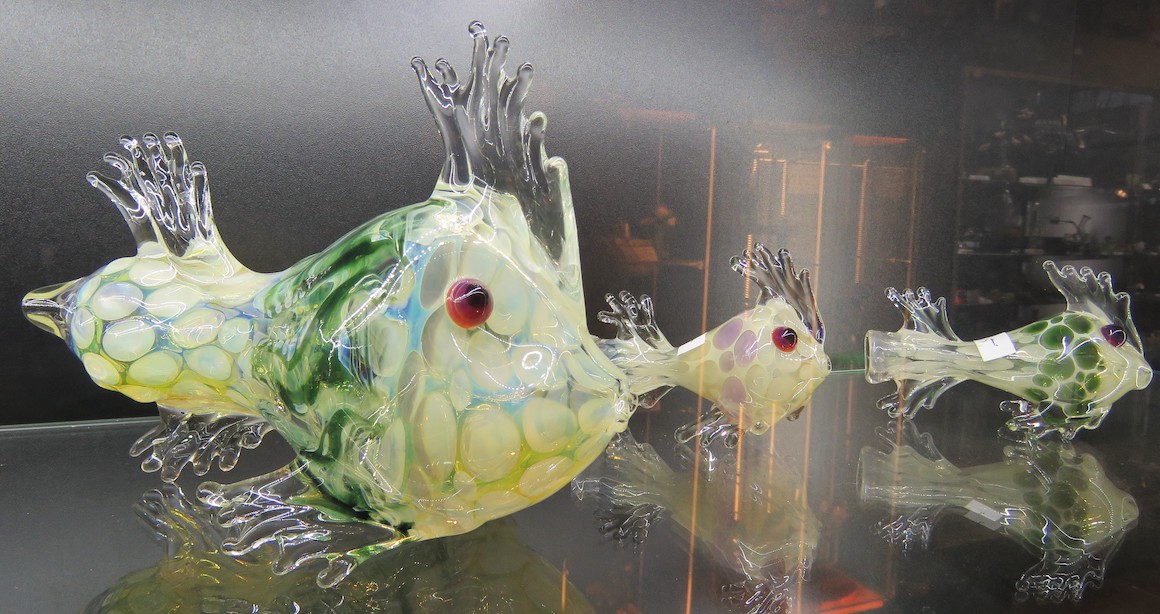 Degenerate Art in High Regard

On the morning of February 24, 2003, police and DEA agents armed with automatic weapons raided hundreds of businesses, and charged into the homes of the most successful glass pipe and bong companies across the country. Operation Pipe Dreams seized millions of dollars in inventory and assets, and arrested 55 business owners.

The nation’s glass pipemakers were stunned and unsure of what to do next. Quit making pipes? Close successful head shops? Find new careers or continue deeper into the black market? The entire industry took a step back and reevaluated business plans that had recently seemed so solid. Their “functional artwork” was being criminalized over “implied intent;” it was illegal to sell because of the crimes its new owners might do with it.

Some head shops skirted the laws by labeling their products “for tobacco use only,” and escorting any customers who used drug references out the door. Still, they knew that, at any moment, it could all be taken away and they could go to jail. Many started their own cannabis grows, finding that to be a safer and more profitable business than paraphernalia.

The George W. Bush administration bragged about winning the war on drugs, and assured worried parents that these wicked criminals had finally been corralled. “When you quit drugs,” claimed President Bush, “you join the fight against terror in America.”

But Americans did not stop smoking pot. In fact, Operation Pipe Dreams did nothing to curb illegal drug use; it just temporarily drove up the price of glass paraphernalia. The businesses that were left standing were the ones who looked into that flame, believed in the long-term mission of cannabis legalization, and simply refused to give a fuck anymore.

The opioid crisis also shifted law enforcement’s focus from cannabis, as internet sales of paraphernalia required too many man hours to patrol.

Individual states started their own rebellion against federal prohibition with new decriminalization and medical legalization laws. As the ball rolled faster, “respectable” people became more inclined to talk about the medical benefits of cannabis, and frozen minds began to thaw as an opioid epidemic swept the nation. The opioid crisis also shifted law enforcement’s focus from cannabis, as internet sales of paraphernalia required too many man hours to patrol.

Bern Gallery opened their doors in 2004, starting out with a storefront of imported home decor and a back room of pipes, bongs, and head shop items. Owners Tito Bern and his wife Mikeala originally had two investors in the business, but they withdrew in the aftermath of Pipe Dreams, feeling the enterprise was too risky.

“It was intense!” recalls Tito Bern. “We had to be very secretive about it, but I knew that, even if we got shut down tomorrow, I could always figure out something else. But this counterculture started creeping back, and it was reinvented in the underground black market.”

The Pipe Classic Puts Burlington, Vermont on the Map

When Bern looked around and saw some of the mind-blowing, unique styles out in the larger glass world, he had an idea. Why not have a glass pipe-making contest at Bern Gallery and invite some of the best glassblowing artists he knew? The first Pipe Classic was heavy on local artists, but word got around quickly, and since the best in this industry were from the U.S, it had the draw of a world title.

The world’s first first glass pipemaking competition, The Pipe Classic, was held in 2006. “There was some trepidation,” says Bern. “It wasn’t an accepted thing to share trade secrets and techniques among this crowd, but that has changed dramatically in the past few years.”

Competitors have twelve hours to finish their masterpieces, broken into six-hour shifts on two consecutive days.

The annual Pipe Classic made Bern Gallery “the torchbearer and leader of the Northeast scene.” The competition consists of an entire week of competitive heats, events, and parties, with increasing sponsorship and media coverage every year, as well as a commemorative video capturing the live torch action, the energy of the crowds, and the awards.

Bern designed the annual September event to have an ever-changing cast of characters by limiting the number of participants each year to twelve. Anyone who wins is automatically invited to compete the following year. After that, unless they take first place again, they have to wait five years before re-entering the competition.

Competitors have twelve hours to finish their masterpieces, broken into six-hour shifts on two consecutive days. Because cuts and skin burns come with the territory, competitors are required to bring their own medical supplies so they can do emergency first aid on site and not lose time. Winners are chosen by both the judges (a $45 judge’s ticket is available to those who love to watch glass art in the making) and the artists.

When Operation Pipe Dreams went down, Jeff White (AKA Dr. Whitestone) had nothing to do with the glass art scene. In 2007, less than a semester away from graduation, he was thrown out of UVM after being ratted on for possessing a little over an ounce of pot in his apartment. He finished his degree in Film Production and Photography at Burlington College, and in 2010, started working at Bern Gallery, “doing every job in the building.”

White eventually learned to blow glass pipes well enough to become the head of the glassblowing school, the go-to technician for pipe repair, and the producer and editor of the Pipe Classic’s videos #3-14.

White admits he’s like an “indoor cat in this industry.” He doesn’t have the worries that other glass artists “out in the streets” have to deal with, such as rent, gas tank rentals, utility bills, and keeping a vast staff of eccentric glassworker personalities in line.

In 2012, former Pipe Classic competitor Aaron Golbert, AKA Marble Slinger, produced the film Degenerate Art, covering the history of glass pipemaking and its subculture from Bob Snodgrass to Pipe Dreams to today’s intricate high-end bongs. The documentary questions the fine line drawn between legality and freedom, fine art and functional art, with many scenes filmed during the early Pipe Classics at the Bern Gallery.

The film’s title is a reference to a Nazi regime phrase that Hitler used to criticize modern, non-conformist art, reflecting the way modern glass bong artists are viewed by society as low-lifes and criminals.

Since the film’s release, bong art has reached new heights. Besides the addition of oil rigs and apparatus designed for smoking new forms of THC, pricey bongs are finding their way into fine-art galleries and auctions, such as a piece described in a recent Esquire Magazine article featuring Kurt B, a well-known Burlington artist who won Pipe Classic VII. The article featured a Hollywood gallery event displaying ultra high-end bongs (some valued up to $300,000), collected and displayed by Benjamin Milstein, a young man who made it big on cannabis stocks.

“I tip my hat to anybody who helps the industry. Extreme money can change the way things market.”

“I tip my hat to anybody who helps the industry. Extreme money can change the way things market,” White noted. He is also happy to see more women excelling at glass pipemaking, a generally male-dominated profession.

It took a full year after Vermont legalized cannabis for personal use before Bern dared to change the signs in his displays from “For tobacco use only” to “All products are intended for cannabis only with the exception of hookahs.”

Admittedly, there are pros and cons to legalization, as the paraphernalia industry becomes less black market and more mainstream. When everything is legal and above board, cheap imports will flood the market and fill the shelves of Walmart, 7-Eleven, and Target.

Going mainstream could be unfortunate for many American glass pipemakers, who will lose an underground culture which has embraced, grown, and nurtured Degenerate Art.