The Authentic American Folk Art of Glass Pipemaking – Part I 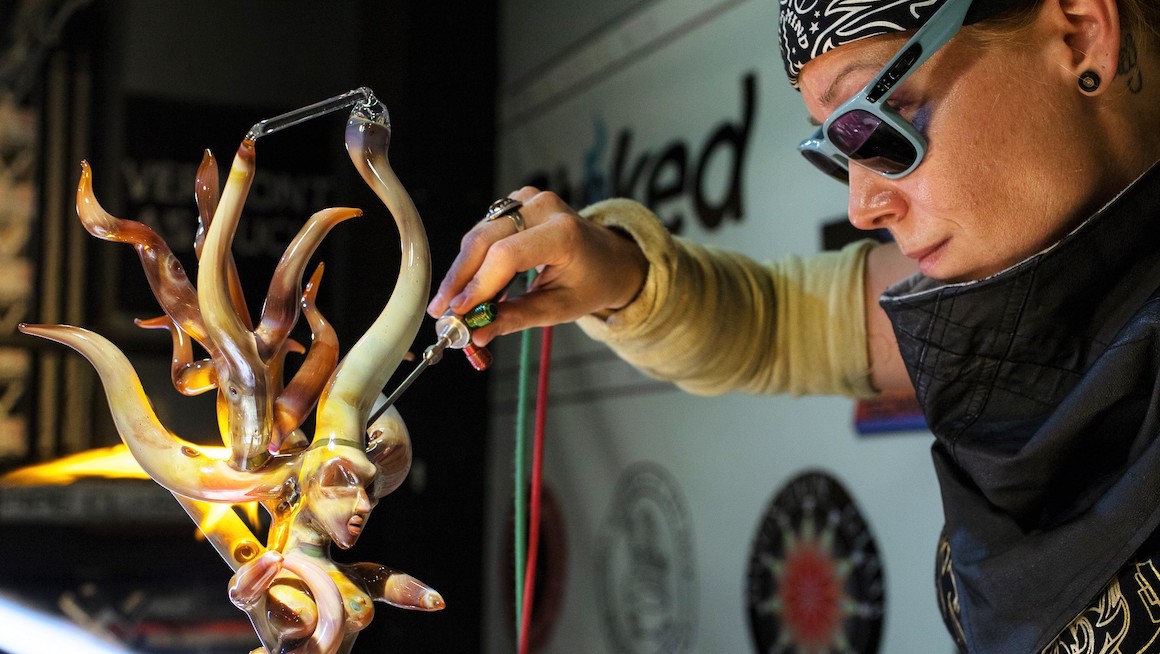 Most cannabis tokers have a special glass pipe or bong that has lasted through years of outdoor festivals, camping, road trips, celebrations and holidaze. At this point, the piece has become much more than a tool and more like a fragrant friend, calling them to wake and bake. Sometimes these pipes get pet names, like Big Bertha, Green Queen, or Lil’ Tokie.

And then comes the moment when it slips from their grasp … memories of laughter, sex, music, friends, nature, and life’s little stages and phases goes crashing to the floor before neurons can react in time to rescue it.

Heartbreak. The loss can feel more personal than a stolen piece of jewelry – like losing a spirit animal or amulet that symbolizes membership in a counterculture that has become so broad that two-thirds of Americans favor legalizing cannabis. Every day, federal prohibition and classification butts heads with new state and local laws, ranging from decriminalization to medical to recreational use.

It is still against Federal law (and many state laws) to create, sell, buy or use “drug paraphernalia.”

Many blazers take for granted that artistic glass pipes and bongs can be purchased almost anywhere. What they may not know is that every state treats pipes/bongs differently. It is still against Federal law (and many state laws) to create, sell, buy or use “drug paraphernalia.” Under title 21 of the Controlled Substance Act, “it is unlawful for any person (1) to sell or offer for sale drug paraphernalia, (2) to use the mails or any other facility of interstate commerce to transport drug paraphernalia; (3) or to import or export drug paraphernalia.”

Paraphernalia became illegal in the U.S. about a decade after Bob Snodgrass (The Godfather of the Glass Pipe) fashioned some of his first creations in 1971. The making of this “contraband” has always been in the shadows, and “those types” of glass artists assumed “stage names” to hide their true identity from the law. They were often looked down on by traditional glass artists, but there was never a shortage of apprentice wannabes, and no shortage of customers wanting to buy the pieces.

The Early Years On Shakedown Street

Although glassmaking techniques have been evolving for thousands of years, it wasn’t until the turbulent, rebellious times of 1971 that Bob Snodgrass applied a blow torch to scientific glass (borosilicate glass) to fashion the first basic clear-glass joint holder.

Snodgrass would go on to invent several revolutionary glass and design techniques, like adding small chips of metal oxides to create new colors. These inventions set “Snoddy Pipes” apart from the rest. Perhaps his most famous invention was “fuming” – creating glass pipes that changed colors after they had been coated inside with cannabis resin.

Snodgrass followed the Grateful Dead, and began wintering in Eugene, Oregon, where he repurposed an old bus into a glass workshop and founded the Eugene Glass School. Eugene became a Mecca for youth wanting to learn how to blow glass pipes with an expanding palette of colors and rapidly evolving functions.

Similar to graffiti taggers, pipe glassblowers usually went by monikers, and they rarely talked about their profession in public.

The art form and its spinoffs spread across the country. The number of glass colors to choose from soared from a handful to hundreds. For three decades, this not-really-legal industry thrived in the shadows of head shops (labeled “for tobacco use only”) and music festivals.

Similar to graffiti taggers, pipe glassblowers usually went by monikers, and they rarely talked about their profession in public. They knew that they were skirting the law, but they were also silently rebelling against cannabis prohibition. Their art sometimes reflected that outlaw attitude.

The most well-known of this new generation of glass pipemakers formed companies, and started to hire more apprentices. Boosted by decent wages, benefits, and healthcare, those glassblowers created warehouses full of impressive and constantly improving products. By the turn of the century, some of  these glass pipe pioneers were making millions of dollars, especially with the dawn of internet sales.

The Feds started to take notice.

On the morning of February 24, 2003, armed DEA agents stormed into the homes and businesses of pipemakers and sellers around the country and arrested 55 owners for trafficking drug paraphernalia. Warehouses full of inventory were confiscated and bank accounts seized. These businesses were essentially extinguished based on “implied intent” of paraphernalia. Basically, they arrested tool makers for crimes that the next owners might do with them.

Operation Pipe Dreams cost taxpayers $12 million and involved 2,000 law enforcement officers nationwide. In the end, it did nothing to curb cannabis use. It just forced paraphernalia production and commerce further underground.

Out of 27 indictments, only one person went to jail –  Tommy Chong. “Operation Pipe Dreams” was a direct reference to the infamous Cheech and Chong movies that, for years, had portrayed hapless police chasing crazy stoners. The glass pipe business, Nice Dreams, belonged to his son, but Tommy took the rap for his family and went to jail for 9 months. The rest were given house arrest, financial confiscation, and fines.

The Attorney General at the time, John Ashcroft, announced, “This illegal drug paraphernalia industry has invaded the homes of families across the country without their

knowledge. This illegal billion-dollar industry will no longer be ignored by law enforcement. The anticipated market value of the seizures today is in the tens of millions of dollars. Defendants in these cases are subject to up to 3 years in prison and $250,000 in fines. They are also subject to forfeiture of all of the illegal contraband and all proceeds from the illegal sales. Property used to facilitate the commission of the violations is also subject to forfeiture. Close to 80% of such forfeiture funds can be turned back to local law enforcement.”

These arrests and headshop invasions sent shockwaves throughout the industry. Operation Pipe Dreams cost taxpayers $12 million and involved 2,000 law enforcement officers nationwide. In the end, it did nothing to curb cannabis use. It just forced paraphernalia production and commerce further underground. At the same time, public opinion about cannabis was becoming more accepting as states began to legalize medical use.

When Operation Pipe Dreams went down, Tito Bern was a small player in the glass industry and a creative entrepreneur. He was in Nashua, NH, making a wholesale glass delivery with his wife, Mikeala, and he couldn’t believe that the shop was closed. The parking lot was empty, and the shop owner wasn’t answering his calls. He was irritated because he wasn’t sure if he even had enough gas money to get back home to Vermont.

Then a friend called him. “Dude … did you hear? It’s illegal to sell glass pipes. We’re all going to be arrested!”

Some glassworkers changed directions and stopped dealing in pipes. Some lost everything. But regardless, Tito and Mikeala decided to go ahead with plans to open a glass art gallery on Main Street in Burlington. Despite the fact that two of their original investors had pulled out over fears generated by the high-profile arrests and threatened federal crackdowns, Bern Gallery was established in 2004.

But pipemaking and pipe sales were handled with discretion. The glass pipemaking industry was temporarily frozen, unable to predict what would happen next.