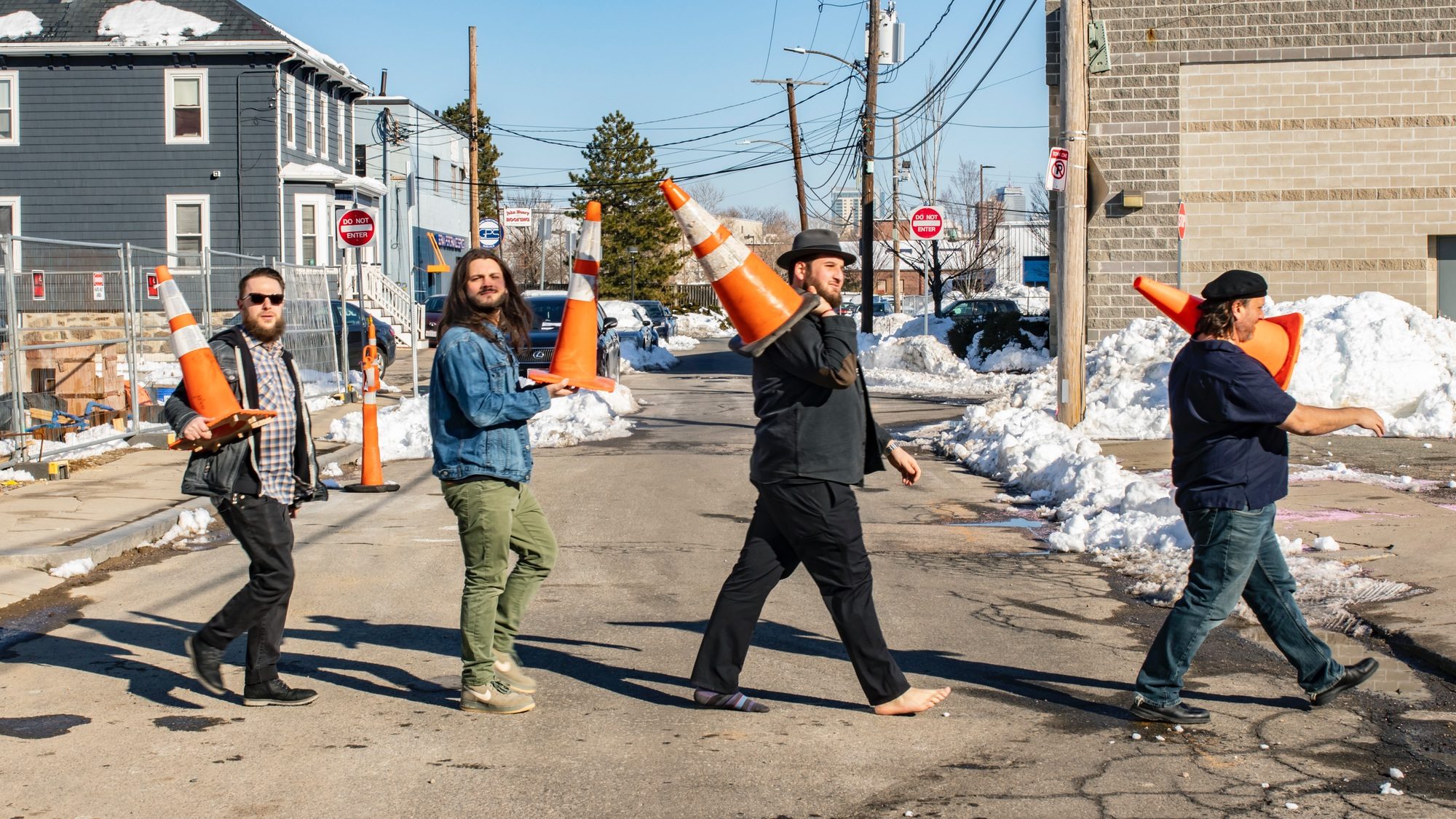 We spent some time this week chatting with Richard James, keyboardist of the band Pink Talking Fish. If you’ve never heard of these guys before, they are a force to be reckoned with. They seamlessly blend the music of – you’ve guessed it – The Talking Heads, Pink Floyd, and Phish.

They’re more than just your typical cover band. They blend, weave, and jam out on the work of groups which are considered, by the music world, more difficult to cover due to their intricacy and hardcore jams. PTF does an impeccable job of recreating the sounds audiences know well, while adding their unique style every set they play.

You can catch them at Nectar’s January 17 and 18 (this coming Friday and Saturday). Heady Vermont will be doing a ticket giveaway for their Friday show, so hop onto our Facebook page to learn more.

HVT: Thanks for taking some time to speak with us! So, PTF has been up to a lot of things within the past few years, and we’ve noticed you’ve gotten increasingly busy. How have you guys been doing and what have you been up to?

We’ve done Higher Ground, 1-2-3 night runs at Nectar’s before, and it’s so nice to come up to Burlington for 2-3 days and just kind of be there, take everything in, and just do our thing.

RJ: We had a nice little break over the holidays. Well, I shouldn’t say that. We had a nice two week break after New Year’s. We were very, very busy throughout 2019. We played all over the country, and played to a lot of new and old markets to keep growing the band.

It’s great seeing all of the new and old faces; people keep coming back which is a good thing. We look forward to 2020, and we are hoping to reach a lot of new areas that we haven’t been to before.

We’ve done Higher Ground, 1-2-3 night runs at Nectar’s before, and it’s so nice to come up to Burlington for 2-3 days and just kind of be there, take everything in, and just do our thing. We just love being up in that area, it’s beautiful and I think every time we play there we end up throwing down extra hard.

We have the funky, wild instrumental Phish stuff that we do and then there’s psychedelic Floyd, then the upbeat super fun Talking Heads. It’s a well-rounded thing that I think fits the community up there well.

HVT: That was one of my next questions, you guys come up to the area at least once a year. What makes you come back to Burlington?

RJ: Well, you know, part of the concept [of the band] is Phish. Ever since I’ve been a professional musician, it’s always been so special walking into that room (Nectar’s) and it feels like there’s magic in the air when we play and do what we do. The fans up there are open to all kinds of different music and what we do is exactly that.

We have the funky, wild instrumental Phish stuff that we do and then there’s psychedelic Floyd, then the upbeat super fun Talking Heads. It’s a well-rounded thing that I think fits the community up there well.

HVT: How did you guys collectively decide to cover these three bands? Those are bands we consider to be in our top ten, so how did you decide?

The set lists we can create with the three-band catalog is special, and every single time it’s different.

RJ: That was Eric, the bass player. He was in the band Particle and they had spent over a decade doing national touring and he got to know the music industry and has a well rounded musical background. I think when he left, he wanted to do something that was just a passion project. When he decided to start a new group, he just took his three favorite bands that he loved and thought worked well together to make it into one concept. It’s proven to be great.

It’s been a lot of fun, and a lot of people have had a lot of fun with it. The set lists we can create with the three-band catalog is special, and every single time it’s different. We are working with different realms of music that’s different every time. I don’t think we’ve played the same show in six years.

HVT: If you could pick one band to add to your regular repertoire, what band would it be?

RJ: That is heavy! If it were…Oh goodness. That is tough. I’m a huge Little Feat fan and I think they would add something a little different. Little Feat and Phish sort of cover the same space but it’s more like a southern New Orleans-y vibe that has more soul than the other bands and that’s kind of where I come from. You know, that rocking halftime soul. That stuff resonates with me. I’m also head over heels with them so that would be one of my top choices for sure.

HVT: Speaking of other bands, you recently did a Beastie Boys concept. Where did that come from?

Anytime I get to be Mike D and become a rapper on stage is just heaven on earth, seriously.

RJ: We did PTF with Beastie Boys in Denver, New York, and Boston for New Years and that concept had proven to be super fun. It throws a big wrench in everything and changes everything up with the feel [of the band] and the energy which was so much fun. Plus, anytime I get to be Mike D and become a rapper on stage is just heaven on earth, seriously.

It’s something completely different and people loved the way that we twist in and segue or mash up a Phish tune, or a Talking Heads tune with the Beastie Boys, and flow from one song to another worked so well. It threw people in for a loop when we would segue something like “Poor Heart” by Phish into something like “Girls” by Beastie Boys. That was a really good time. We’re probably gonna bust some of that out for the Nectar’s shows for sure.

HVT: Dave [guitarist] left the band about a year ago, and I feel like when Cal Kehoe came on, you guys didn’t skip a beat and flowed well together. Did you work with him previously? How did he come about joining PTF?

RJ: Cal, the new guitarist, was doing one of the Phish afterparties after the ‘jam night’ of the Bakers Dozen, and he was performing with Tom Marshall (Phish lyricist) from Amfibian, and I got a call to come and sit in. I was in town anyway for some after-party shows so I went down and performed with them all. We decided to give Cal a call [when Dave left] and he was at my place for a while.

It’s always hard losing someone, and the fact that it worked out the way it did was great.

We worked on all of the music; mostly the more difficult Phish compositions, but he already had a lot of the Pink Floyd down. He has an amazing voice, we worked hard right off the bat and like you said, we didn’t skip a beat. It’s always hard losing someone, and the fact that it worked out the way it did was great.

HVT: Okay, time for some cannabis questions! Do you consume or do you not participate?

RJ: I do from time to time, not really in social situations. I build lamps; I take old, repurposed antiques and things that are discarded. Things I found on the side of the road, at antique shops, online or things that people are getting rid of and I go up into my barn and have all of these old funky pieces and turn them into art. I usually wire them to be turned into lights and that’s when I get down.

HVT: So, you must have been to the Light Club Lamp Shop in Burlington then, right?

RJ: I have! I get very excited when I walk into that place [laughs] it’s just right up my alley. But yeah, I usually [consume] when I’m either making lamps or writing some new music and need a little bit of extra creativity or inspiration.

It’s a pretty peaceful thing to most and it has so many medical benefits. I think it should be legal.

HVT: What are your thoughts on legalization? Where do you hope it ends up in the United States?

RJ: I just hope it’s legal across the board. I could have an entire interview on this regarding alcohol and cannabis and how it’s not fair about what is and what isn’t legal. Alcohol is a lot more dangerous. I think that it should be legal and have our freedom to do what we want in that regard. It’s a pretty peaceful thing to most and it has so many medical benefits. I think it should be legal. But you know, that’s not for me to decide.