Rocking and Rolling Joints Since the 70s

Editorial Note: This post was written as part of a paid business partnership.

Green Leaf Central wants to elevate the Vermont cannabis brand and give economically challenged farmers in this state “a good punch in the arm” by growing cannabis. Owner Joey Verga opened his downtown Burlington shop in December last year, located slightly off lower Church Street on Thorsen’s Way – an artsy side alley that faces City Hall. 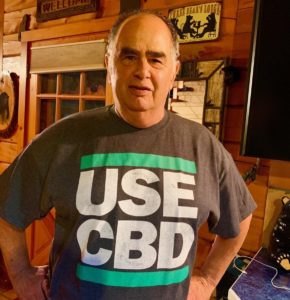 “I had been watching the hemp business for three years. I saw it coming on strong, but I really committed myself when the Farm Act passed,” explained Verga.

The Church Street location was a success, but he wanted to reach more of the locals who avoid downtown because of parking and access challenges. Because of this, he opened a second store on Williston Road in June for those on tight schedules who want a place to scoot in and out of easily – sort of “The CVS of CBD.” Near The Bagel Place and Chicken Charlie’s, the South Burlington location proved to be profitable, as Verga also realized that the number of nearby hotels offered him out-of-town customers.

Verga got into cannabis at a young age, as a talented teenage musician who grew up on Long Island. He was having a hard time making it in the music scene, so he put down his guitar and became Hall & Oates’ first roadie. There are pages in John Oates’ memoir, Change of Seasons, where he remembers Joey “Boupa” (Italian for octopus) Verga as “a big kid with an easy laugh and a real New York attitude.”

Life on the road with H&O evolved from old vans to taxi cabs to limousines to chartered jets on world tours as the band took off with the hit, She’s Gone and kept on putting them out. “You could never sleep when you were on tour,” Verga remembered. “Every night was a party and every day was a celebration of a great show. It was very upbeat! I lived the life of sex, drugs and rock and roll – high on the hog!”

Verga branched out in the music business as a manager of bands such as Dr. Buzzard’s Original Savannah Band, that took second for Best New Act in the in 1976 Grammys with Cherchez La Femme.

But eventually the industry took its toll on him with too many late nights and glaring indicators that it was time to quit the drugs. He walked away from the whole scene and landed in a seaplane on Lake Iroquois in Vermont. He quit cocaine and cigarettes cold turkey (he never was a drinker) while staying at an old friend’s home on the lake, but he never quit cannabis. He knew instinctively that pot was a healing drug, not an addictive or destructive one.

After a couple of years of healthy living, enjoying the beauty of Vermont while finding himself again, Verga decided to make some drag racing videos with an ex-roadie friend. He went to Vegas to promote them, and ended up quickly selling all of them for a small fortune. The experience showed him that he had the chops to be a great salesman. For the next 25 years of his life, he lived a halfway-normal routine of marriage and working at Burlington-area car dealerships, wearing a suit and tie to work for the first time in his life. But he never gave up on the idea of cannabis entrepreneurship.

Touching so many lives … seeing healing happening … the success stories of my repeat customers! I just want to bring CBD and cannabis to the table and help everybody who needs it.

As Verga related the bizarre story of his life, a middle-aged couple from Connecticut walked into Green Leaf Central. He excused himself to help the gentleman choose a pain salve with a high enough dosage of CBD to be effective on his torn rotator cuff. The man rubbed a sample into his shoulder, and within a few minutes, noticed that his shoulder already felt better.

“That’s what I like about this business,” he said after they left. “Touching so many lives … seeing healing happening … the success stories of my repeat customers! I just want to bring CBD and cannabis to the table and help everybody who needs it.”

What frustrates him about the cannabis industry? Government, mostly. “So many people come through my doors asking for pot. They see the sign with the green leaf and they want to buy a plant or some buds to enjoy while they are in Vermont. Legalizing sales of pot ensures the customer is getting consistent quality and a safe product. The state could use some of the tax revenue to fight opiate addiction. I think it should be done right away! It’s also frustrating to see people who need this medicine and their health insurance won’t help them buy it.”

Right now, Verga is looking for another cannabis-related business to rent part of the space in the back of his downtown shop. It’s a large room (1,200 square feet) that has endless possibilities for the right operation. He is open to a gallery or a pop-up-sale space with a customer base similar to Green Leaf Central. Besides the retail aspect of GLC, he is also a Vermont-licensed hemp grower and processor.

Heady Vermont members can receive a 20% discount at either location.