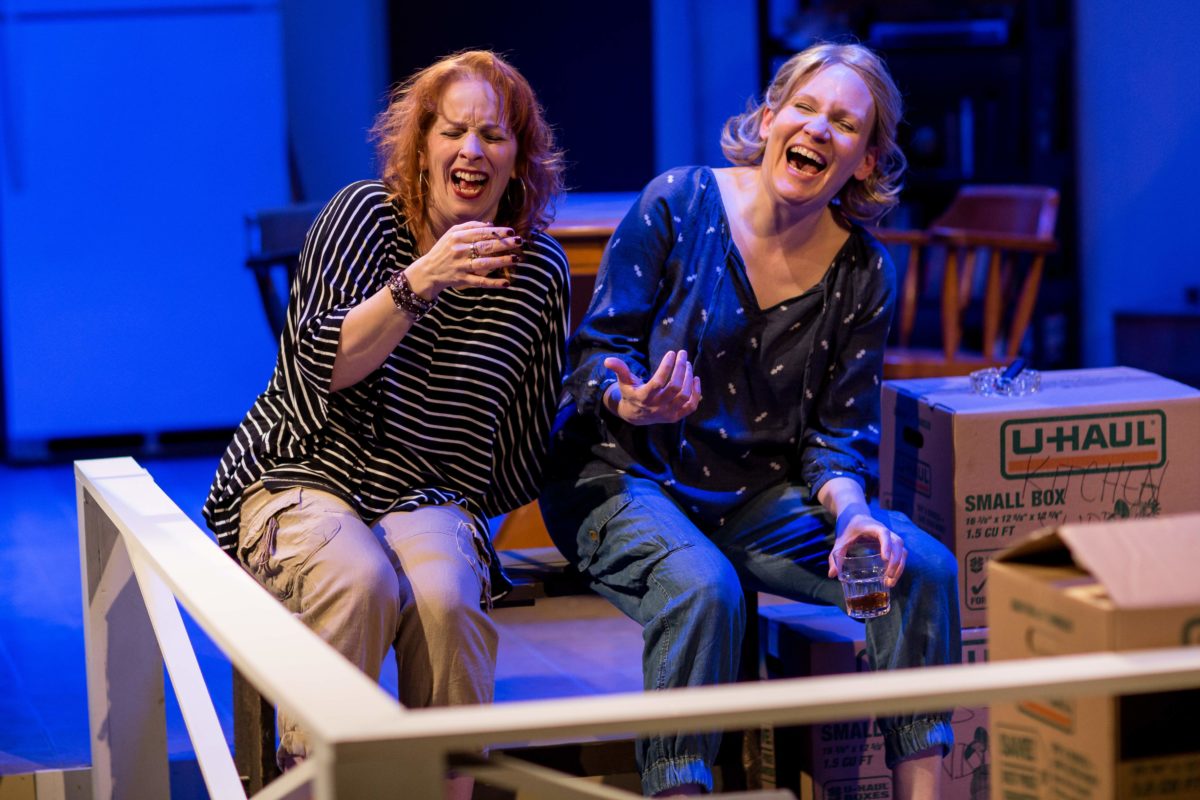 A new play opening this week at Vermont Stage in Burlington invites audience members to participate in a dialogue around cannabis.

When a Midwestern divorcee goes searching for a roommate, she gets a lot more than she bargained for. Written by Jen Silverman and directed by Cristina Alicea, The Roommate is a story about growth, defying expectations, and being open to surprises.

“Sharon and Robin are at various crossroads in their lives,” says Cristina Alicea, Vermont Stage’s artistic director and the director of the show. “They’re in their early fifties and they’re trying to reinvent themselves.”

In reinventing themselves, they create a story actor Karen Lefkoe describes as “the feminist version of the odd couple meets Breaking Bad.”

“I’m always in stories that bring opposing figures together and they learn something from each other,” Alicea says of Vermont Stage’s decision to produce the play. “And this is very much in line with the work we like to do. We’re taking people from totally different world views and putting them in a room together and seeing how they react to each other and how they grow and change from their experience together. I feel our world could use more of that.”

One of the things that divides the two characters, in addition to their backgrounds and life experiences, is their relationship to cannabis. The character Robin, played by Heady Vermont’s own Kathryn Blume, moves in with several plants and isn’t shy about smoking.

“She’s fully integrated cannabis in her experience and her worldview as well,” Alicea says. “She’s a big believer in marijuana being used for positive purposes and we see that in the play.”

With the differing perspectives of cannabis playing out on stage, Alicea decided to bring the audience in on the conversation.  Following Thursday evening performances, the audience is invited to stick around for discussions around cannabis and its future in Vermont.

“There are lots of different viewpoints around legalization and I thought it would be a really interesting conversation to have,” Alicea said. “I like to have conversations that I find educational for me too, and it’s my hope that people leave with a new understanding on the issue.”

Other speakers for the event include Tim Fair of Vermont Cannabis Solutions, Lieutenant Governor Dave Zuckerman and even a winner of Heady Vermont’s inaugural Headies awards, Susan Snowden.

Snowden is a horticulturalist and the owner of Vermont Canna Pharm, which makes handcrafted cannabis wellness products.

After completing a certification course at the University of Vermont, Snowden now consults with patients to understand what kind of cannabis can alleviate their symptoms.

“There really isn’t anyone to advise on how to use to the plant,” she says. “If it were any other drug, it would be a doctor or a pharmacist but because we’re in this weird kind of gray area there aren’t those kind of professionals to advise people what to take and how much.”

Vermont’s current statute allows for the possession of small amounts of marijuana and the cultivation of plants. A system to tax and regulate sales is in the works at the legislature, but Snowden says some people still a have a ways to go before they’re comfortable with something that hasn’t been criminal in Vermont for over a year.

“I can see there’s a big difference between how my generation views and feels about cannabis in general simply because it’s been illegal for so long, whereas people in their twenties have seen a dialogue for their entire adult lives about legalizing cannabis,” she says. “They don’t have the same stigma that I have from 60 years of prohibition.”

A study published in the journal Drug and Alcohol Dependence found increasing numbers of middle-aged and older adults are trying marijuana for the first time.

“The people that are coming out to learn more are baby boomers,” Snowden said. “I think that’s because they’re old enough to have some chronic pain and have been taking some medications. They’ve also got discretionary income.”

Snowden says with age comes a shift in perspective. “Now that they’re 59 and they’ve had a bad back for 20 years, maybe it’s not so much about going out and partying, maybe it’s about making their back not hurt anymore.”

The Roommate opened March 6 and runs Wednesdays through Sundays until March 24 at the Main Street Landing Black Box Theater.

“The Roommate” Synopsis: With a recent divorce and her son living across the country, 50-something Sharon posts a listing to fill the empty space of her Iowa home. But she quickly learns that her new roommate Robyn, a vegan from the Bronx, couldn’t be further from the ladies in her book club. When Sharon begins to uncover Robyn’s secrets, she taps into a deep-seated desire to abandon her comfort zone and live a life of danger and adventure. Soon Sharon discovers that turning over a new leaf can have unintended consequences in this wicked comedy that puts The Odd Couple and Breaking Bad in a blender. The Roommate is appropriate for ages 17 & up. Adult language and themes. Running Time: 90 minutes with no intermission.

Tickets are available at vermontstage.org.

“We see that in the legal cannabis industry it’s still primarily white men who ...

The Vermont Agency of Commerce and Community Development and the Department of Taxes will be ...