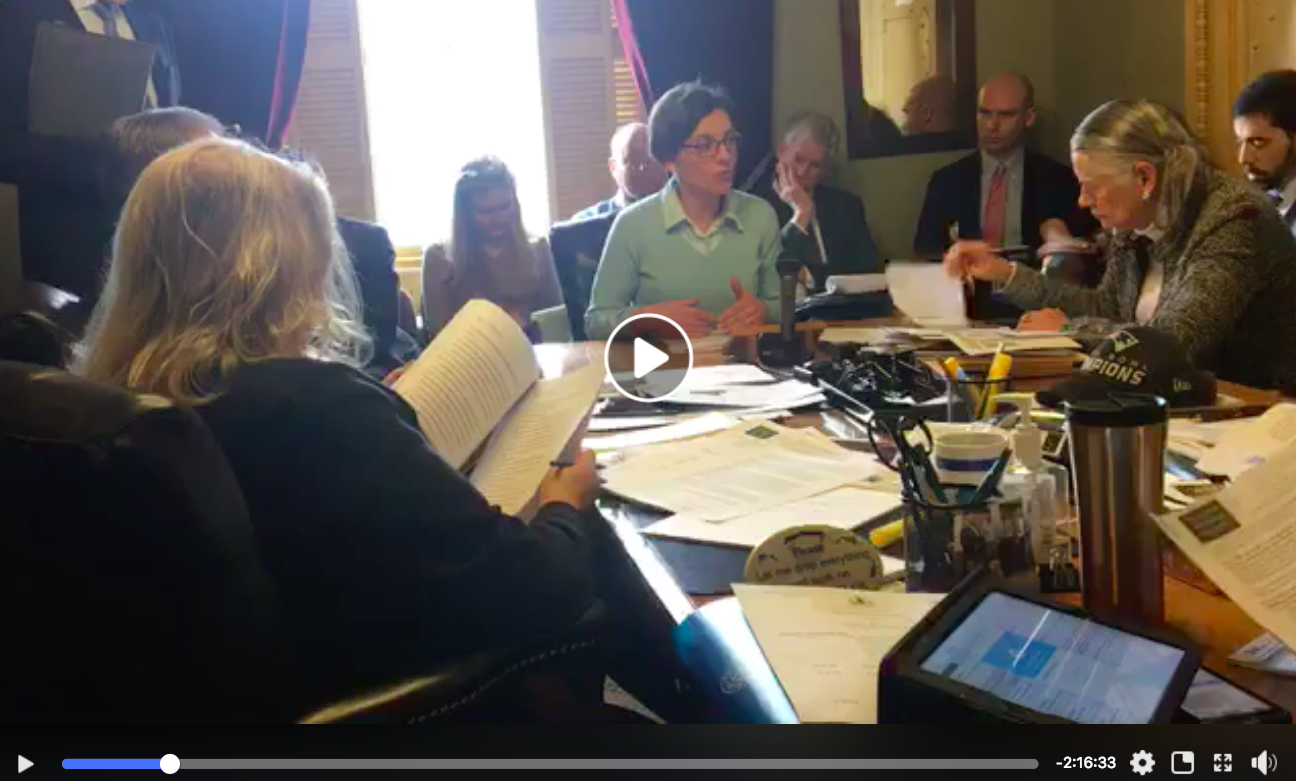 The Senate Judiciary Committee took testimony earlier this week from various stakeholders on some of the provisions in S. 54, a bill that would establish a taxed and regulated cannabis market in Vermont.

Cannabis will be taxed at a ten percent excise tax plus the six percent sales tax. The one percent local option tax would be applied in applicable towns. Towns would have the authority to require permits for a cannabis business and may vote as a town to prohibit such businesses within their towns.

Voices representing growers, dispensaries, medical health professionals, drug recognition experts, and social justice groups all presented at-times conflicting visions of what an ideal taxed and regulated system could look like – if at all.

“Our big concern with commercial sales is as soon as there is profit, there is motive to push sales to youth and high users.” – Jessa Barnard, Vermont Medical Society

At their most recent meeting, members took up the issue of commercialization and adopted a position opposing it – a stance Barnard said is not likely to change.

Barnard said this position was developed from observations of how alcohol, tobacco, opioids, and other substances are regulated in the state.

Barnard advocated for further study of education and prevention models, childproof packaging, and how marketing should be regulated.

Sen. Dick Sears, who chairs the committee said the most aggressive rollout of the bill, should it pass, would be April 2020. Sears said it would be ample time to develop and implement an education and prevention strategy.

“If the governor wants to see that, he is welcome to include it in his budget,” he said.

Regarding proposed changes to Vermont’s medical marijuana registry, Barnard said the Society was concerned by eliminating the three-month patient-caregiver relationship requirement in the current statute. The bill would also require a rewrite of program rules including the application process to running dispensaries. Barnard advocated for limiting the list of conditions that medical marijuana be used to treat. By prescribing marijuana to treat any condition, Barnard said physicians would be placed in a legal gray area.

“In general, we think the regulatory structure is working well and is serving the needs of the patients but also has a number of safety checks in place,” she said.

Should the structure be altered, she hoped public healthcare providers could provide input on what would work.

That said, she insisted that Vermont’s physicians are not in favor of prohibition.

“They supported decriminalization, don’t support criminalization of drug use, drug possession, and support drug use being treated as a public health issue,” Barnard said.

Simha Ravven, MD is the interim Chief Medical Officer at the Brattleboro Retreat and Vice President of the Vermont Medical Society. Ravven provided further medical perspective on the expansion of qualifying medical conditions for medical marijuana and changes to caregiver-patient relationship qualifications, saying more access would expose patients to unknown risks without a reasonable expectation of benefits.

“Certification should be provided only when there is scientific evidence to back up its use,” she said.

Ravven said she anticipated expansion of medical marijuana certification by qualified healthcare providers would most likely go to those suffering from anxiety and anxiety related conditions. Ravven said while marijuana can provide initial relief for symptoms related to anxiety and anxiety related disorders, the relief is short-lived and the symptoms they previously struggled with return stronger. Ravven said patients will increase their consumption and enter a cycle where cannabis exacerbates their symptoms.

“One of the thing I do is work with people to stop cannabis use that has become problematic and negatively affects their work and family relationships,” she said.

Ravven would not provide an answer of what the right amount of time for a patient to have with their caregiver, opting instead to say it needed to be “meaningful and longitudinal.”

To ensure that diverse voices were heard, Silberman also requested one of the two Governor-appointed positions on the Cannabis Control Board be reserved for a member of a community disproportionately impacted by cannabis prohibition.

“Regulation gives us the opportunity to address this inequity head-on and I urge you not to let that opportunity slip through your hands,” he said.

“Our concern is that the medical cannabis market is not necessarily viable long-term with the way the market is going.” – John Hollar, DRM

That said, John Hollar, a lobbyist with Downs Rachlin Martin – speaking on behalf of Grassroots, Vermont based in Brandon, and other dispensaries around the state – made the pitch that existing medical dispensaries ought to extend their corner on the market by “nine months to a year” as part of getting a head start on the competition that is sure to come.

“Our concern is that the medical cannabis market is not necessarily viable long-term with the way the market is going,” he said, noting that as more product becomes available from both legal and illegal sources, the prices drop and hurt medical dispensaries. “It’s more difficult for the medical marijuana market to compete,” he said.

Under the current bill, the rollout of legal sales would take place over two years, during which operating dispensaries could recoup some of their investment. Hollar also said this would cut into black market sales.

Sen. Sears asked Hollar if small growers would be allowed to provide the products to be sold.

“We’d have to discuss that,” Hollar responded.

Sen. Philip Baruth asked if this proposal would create an unfair advantage for dispensaries.

“If we follow your proposal, wouldn’t we be again starting current ownership at a place in advance of the rest of the market?

“It’s only a fraction of the market,” Hollar said. “We’re only talking about a handful of dispensaries in communities sate wide.”

“But the biggest,” Baruth pointed out.

“Well yeah,” Hollar admitted. “But with limited operations. After two years I would expect you to have full, robust competition in those communities.”