Federal compliance and new rules in progress for hemp 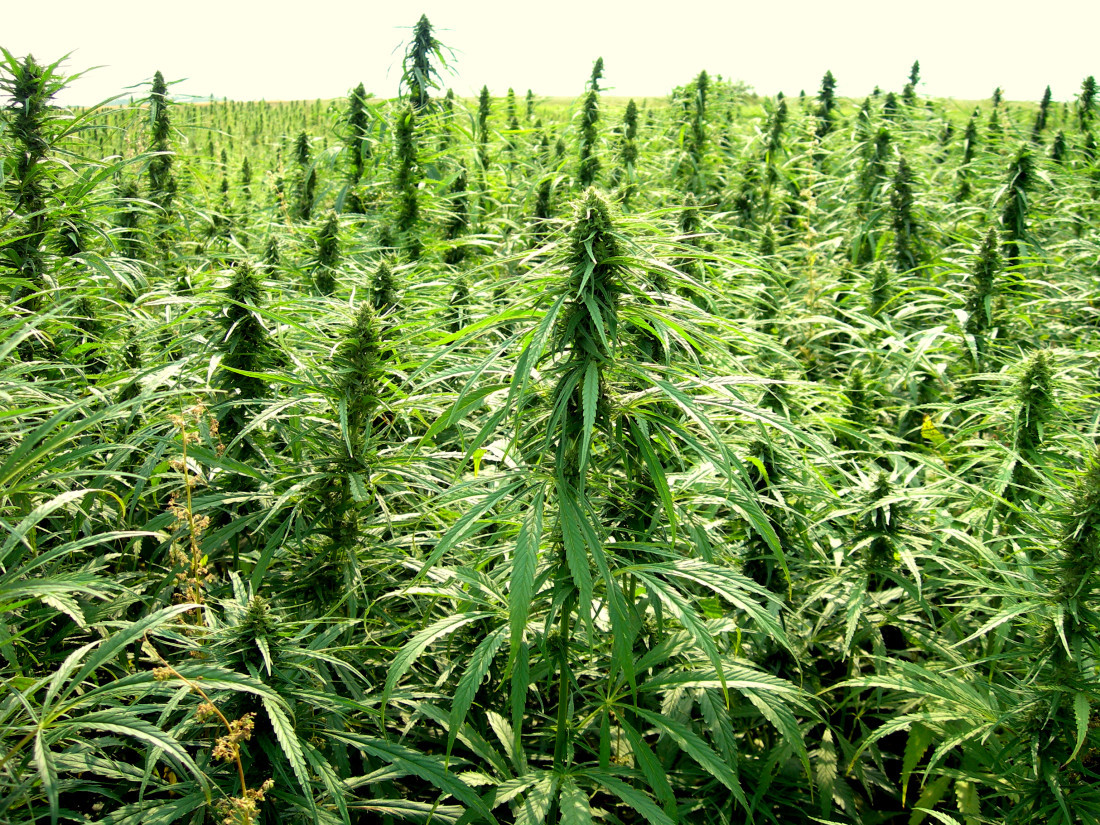 Vermont hemp has made progress as a legal agricultural crop but despite the fact that 3,290 acres were registered to cultivate hemp last year, there’s still a long way to go.

Vermont Farmers have been growing hemp in since 2014, as allowed under a pilot program of the 2014 Farm Bill. After the passage of the most recent farm bill late last year, state regulators need to receive approval from the feds on how hemp is grown and processed. The 40 states that have pilot programs must have their hemp programs approved by the United States Department of Agriculture. Vermont’s hemp program is currently being refined and developed from two directions; the first is a bill that would amend the state’s hemp program to confirm with federal requirements; the second is a draft of rules developed by the Vermont Agency of Agriculture, Food and Markets (VAAFM) that would conduct research within its program and register hemp growers and processors.

Both for their own familiarity, and to prepare for additional hemp legislation this or next year, the House Committee on Agriculture and Forestry — chaired by Rep. Carolyn Partridge (D-Windham), who herself grew 21 CBD plants last year and keeps a stalk in the committee room — has been hearing testimony from Vermont hemp farmers, processors, product-makers, and Heady Vermont about Vermont hemp challenges and opportunities.

Two weeks ago, the House Agriculture committee was joined by the Commerce and Economic Development for a 2+ hour presentation by a group of Vermont businesses including, Northeast Processing, Kria Botanicals, Luce Farms, and Kitchen Cabinet Medicinals. This past week, the House Committee on Agriculture heard testimony from Colomont and Heady Vermont on Tuesday.

This Thursday morning, a group of multiple legislative committees will all gather and hear what’s described as a “Hemp Processing Center Proposal” from David Muller, an entrepreneur who’s pitching his proposal to convert a 120 acre and 86,000 square foot former prison facility into a hemp processing lab.

As VTDigger has previously reported, Muller has already hosted tours of the facility with lawmakers and on Thursday, February 7, the founder of the company that created the LASIK surgery and chemist will present to the House Committees on Agriculture and Forestry, and Commerce and Economic Development, joined by the Senate Committee on Agriculture.

In one of several cannabis-related bills up for discussion this session, lawmakers are developing a bill that would amend the state’s hemp program. Sen. John Rodgers of Glover introduced S. 58 on Jan. 25 and it was referred to the Committee on Agriculture.

“Because of the recent farm bill, it is no longer a pilot program,” Rodgers said. “We have to update the language in our statute. This is keeping our law updated.”

Rodgers said the changes proposed in S. 58 are relatively small. In a draft of the bill, the state’s Secretary of Agriculture Food & Markets is directed to regulate industrial hemp, instead of researching it.  The word “pilot” is omitted.

The bill aligns the definition of hemp with the federally defined tetrahydrocannabinol concentration levels and states that all cultivation, possession, and marketing of hemp and hemp products is to be done within the state’s program.

“We want farmers to know we have their back and we want to make sure nothing impedes their progress.”     – Sen. John Rogers

Cary Giguere is the director of Public Health and Agriculture Research Management in the Vermont Agency of Agriculture, Food and Markets. While the new farm bill broadened the definition of hemp to all parts of the plant including seeds and all derivative extracts with a THC concentration of less than .3 percent on dry weight basis, there are still some details to refine.

While the DEA won’t regulate hemp and hemp products, that role now falls to the U.S. Food and Drug Administration. How the FDA will approach its new regulatory responsibility remains to be seen.

“It’s out of the frying pan and into the fire,” Giguere said at a recent roundtable meeting with other hemp growers and processors. “We don’t know what that means.”

Farmers are in the midst of planning their crops for the coming season and Rodgers said he hopes the bill moves from the Senate to the House quickly. “We want farmers to know we have their back and we want to make sure nothing impedes their progress,” he said.

In spring of 2018, H. 663 passed both chambers and was signed into law by the governor. Act 143 provided the opportunity for any farmer who registered with the Agency of Agriculture by July 1 in 2018 to grow hemp and participate in a federally compliant research program.

In addition to registering all processing facilities, processors will have to account for all material they process by volume and assign lot numbers to any products that originate at their facilities.

A draft of those rules has been in development since August and should be in place before the 2019 growing season. It would classify Vermont hemp in two categories: A and B. The top grade would go to producers that grow, process, and store their hemp and hemp-infused products in facilities with documented practices for reducing a risk of contaminants. It also places requirements on growers, processors, and record keeping.

Under the draft, growers are to grow crops in certified and registered cultivation, drying and storage areas. Those areas are to be accessible to inspectors as well as any maps representing those areas. Growers can use any propagation method including planting seeds or starts, cuts or clones and must submit annual reports including number of employees, income and other data.

“This is about growing the Vermont brand. This is also about the power of testing. People will know exactly what they’re purchasing contains everything that the label says.” – Alyson Easton, Agency of Agriculture

In addition to registering all processing facilities, processors will have to account for all material they process by volume and assign lot numbers to any products that originate at their facilities. The state is also weighing limiting extraction methods that can be used to CO2, ethanol, or lipid (fats like coconut oil); other petroleum-based solvents would be banned. Only processors may transfer hemp or hemp-infused products to retailers or consumers.

The draft also lists exhaustive record keeping requirements including purchasing records of seeds, starts or clones and the compliance of those cultivars with the federal definition of hemp.

The certification of industrial hemp will rely on frequent testing of batches and the draft rules also set rules for testing and disposal of batches that test higher than a .39 percent THC threshold.

Alyson Easton, Deputy Secretary for the Agency of Agriculture, Food and Markets, said the rules would help establish Vermont’s hemp growers and processors as the best in the country.

“This is about growing the Vermont brand,” she said. “This is also about the power of testing. People will know exactly what they’re purchasing contains everything that the label says.”

In addition to expanding the definition of hemp and removing it from the Controlled Substances Act, the 2018 farm bill demands that compliant states:

Giguere said all of this and more will be part of the state’s plan that it will submit to the U.S. Department of Agriculture, but it remains to be seen how Vermont’s regulatory plans will mesh with federal ones. After a federal government shutdown, the USDA still needs to write its own rules on hemp, a process that could take a year or more.

“Processing is making medicine. If they can’t document it well, it’s not safe.”

Despite this, other states have already begun work and are submitting their respective plans to the USDA. “They’re encouraging states to take the lead on this,” Giguere said.

Vermont’s hemp growers and producers have contributed their comments on draft rules in a survey conducted by Heady Vermont. The survey was sent to over 75 Vermont hemp and CBD growers and producers. In the 26 that responded, responses issued concerns about growing, processing, record keeping and registration requirements. Highlights included:

Maintaining documentation standards was also an area of concern. “Processing is making medicine,” read one comment. “If they can’t document it well, it’s not safe.”

Sen. John Rodgers said he would like to limit the amount testing required of farmers. “Testing is a huge cost and farmers that end up having to take a lot of samples to a lab can end up incurring a lot of costs,” he said. “[Fewer tests] saves the farmer a lot of time and money.”

“I can understand have the processors keep good records but I think the farmers should be allowed to farm,” he added.

The deadline to submit written comment on the rules is next Thursday. After all the comments are compiled and adopted into the new regulations, a new draft will be filed with the Legislative Committee on Administrative Rules and The Secretary of State’s Office for an official public comment period.

“We didn’t aim to produce a final draft on the first time around,” Cary Giguere said. “We’ll likely have another two drafts after this one.”