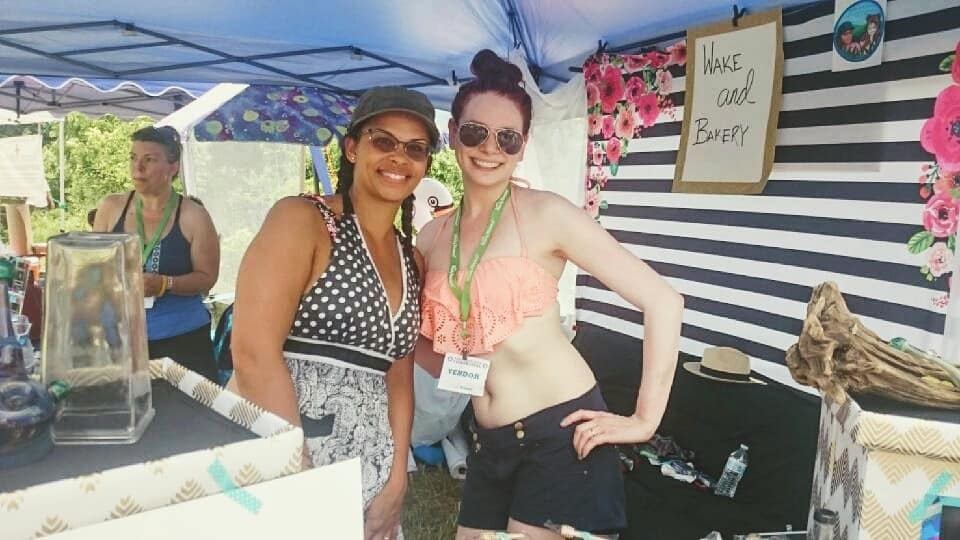 Lisa Nyhagen and Stephanie Carter of Wake and Bakery didn’t plan on running a cannabis food business. They’d been working in the beauty industry their whole lives. Carter – a married mother of three kids – was running her own salon while using her cosmetology trade and loving it. Nyhagen has been working at Carter’s salon as an esthetician and cosmetologist. Carter was also making THC baked goods for fun, and Nyhagen was a very happy product tester. Life was fine. What more did they need?

Then, one night after a long, grueling session of wine and edibles, they came up with the idea for an establishment called ‘Wake and Bakery.’ They laughed. They considered it for a moment longer. They googled the URL and business registry listing in Vermont. It was available. Life was better. They didn’t actually think they’d go anywhere with the idea. “THC wasn’t legal, and we thought,” says Carter, “that someone would just buy the domain name from us eventually.”

But then they saw a Facebook posting from Keith Morris at Willow Crossing Farm (also host of HVT’s July 1 Legalization Celebration) about the uses of hemp, and it occurred to them that until Vermont legalized THC, they could just as easily make and market products with CBD.

So they reached out to Keith, started experimenting with his homegrown strain of hemp flower, and launched a couple of products in January, 2018. Then Vermont legalized THC for personal use, and the landscape changed. April 20th came along, “and we cranked up our work,” says Carter. “Then we officially launched the business at the July 1st celebration,” says Nyhagen, “where we made a killing. And things have been escalating ever since.”

Carter does all the baking, while Nyhagen does “everything else – packaging, labels, marketing, paperwork, emails, social media.” “You’ll never find me on line,” says Carter. While they are non-stop experimenters, the staple CBD-infused products constantly emerging from their commercial kitchen in Richmond include honey sticks, butter (aka “budder”), gummy bears, chocolate chip cookie dough, and more.

“We’re always evolving, though,” says Nyhagen. “Someone just asked us to do lotion for a massage therapy place in Rhode Island.”

Carter adds, “Our customers have pushed us in different creative areas. Lotion, pre-rolls, tinctures. People ask us for stuff and we research how to do it.”

Most of all, they’re interested in “having fun, making yummy treats and having a hobby together as best friends,” as well as educating the public about the benefits of cannabis. “I work with the public a lot,” says Carter. “I tell people I have an edibles business. Because they know and trust me, they’re willing to accept what I’m saying a little bit more. I’m a source they find reputable.” Their products are currently for sale at Tailfeather in Burlington and World Famous Monkey House Customs in Stowe, and they have visions of “being in all the small local businesses” says Nyhagen. “And always with our stuff being made with local Vermont products. That’s very important to us.”

When asked if there’s a product they’re currently itching to make, they both smile and mention their After Dark Collection. “It would be everything fun you want after dark,” says Nyhagen. “edible body spreads, flavored lubricants, massage oil – you get the idea.”

Successful as they’ve been so far, they both willingly admit that making edibles is trial and error. “You have to keep being persistent,” says Nyhagen, “tweaking things, figuring out how to elongate shelf life.”

And not every product is a win. “I gave lollipops to God,” says Carter. “Couldn’t do ‘em.”

Wake and Bakery is offering Heady Vermont members 15% off all their products at the retail stores which carry their confections. In addition, if members run across the Wake and Bakery booth at a festival or trade show, they can flash their member card and get a special treat for free.