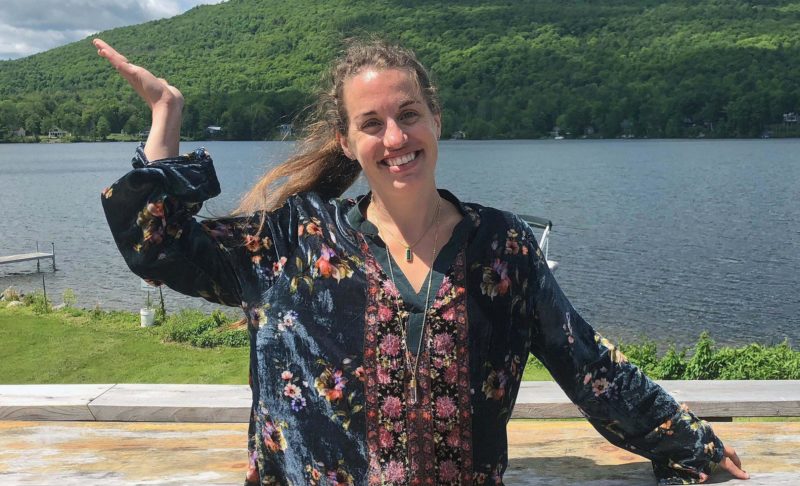 Ashley Reynolds, Elmore Mountain Therapeutics co-founder and president, was one of seven finalists, narrowed down from 44 applicants. Based in Morrisville, Reynolds shared her journey to CBD entrepreneurship, as well as her secrets to success. Collaboration rather than competition and strong support of female leadership within the industry have been cornerstones to her business model.

Before learning about the pitch competition, Reynolds first introduction to VCET itself serendipitously came through a female founders speaker series the organization hosted where Reynolds heard a keynote speech from Burton CEO Donna Carpenter that particularly helped inspire her and served as an introduction to the programs at VCET.

We aren’t trying to break the glass ceiling – we are breaking the ‘grass’ ceiling by creating a safe and accessible space for women in the industry.

The competition itself at Middlebury College is held in a format similar to the TV show Shark Tank. “It’s in front of a live audience,” says Reynolds. “It’s in front of judges, it’s being recorded, you had an eight minute window to do the pitch, then a four minute Q&A from the judges and you’re doing a powerpoint presentation the whole time. The only difference is the award didn’t come with investment with it, just the cash prize.”

While Elmore Mountain Therapeutics has had some early success, Reynolds said that preparing for the pitch competition was itself a huge entrepreneurial learning process for her.

“I definitely emailed Sam Gerber from VCET when I looked at the application and there were qualifying factors that were on the website — which you can check out on the website — but one of them was to ‘please upload your pitch-deck’, and I didn’t know what that was. So, I emailed her, received a link and some guidance and then obviously spent a week writing ours, but I learned a lot on my own, even how to create a pitchdeck, and how to pitch people on your company.”

Entrepreneurs are over the fact that it’s cannabis. Now they want to know how you’re going to grow your business.

Reynolds adds, “I knew what we had been doing and our successes, but to put that into a concise, organized manner was a good learning experience for me. I recommend that anyone — looking for investment or not — to get it on paper and look and see what are your strengths, weaknesses, and where you want to grow and helps you sort of organize where you want to go. I don’t think I had really been doing that since I’m so busy with the day to day versus long-term plans.”

Elmore Mountain Therapeutics was the only cannabis company to participate in the Startup Challenge, a factor which she says obviously helped differentiate her business. As Reynolds likes to say, “We aren’t trying to break the glass ceiling – we are breaking the ‘grass’ ceiling by creating a safe and accessible space for women in the industry.”

Panel judge Hinda Miller expressed support for Reynolds’ approach, saying, “Since my Jogbra days, I have always believed in the power of female entrepreneurs to create an ecosystem of good jobs, family-friendly communities and value-added products and services in Vermont.”

This company presented a compelling business case, market knowledge, and potential for local impact for non-THC, hemp based product suite. The three independent judges selected her firm as best potential for the $20k prize based upon what they saw and heard.

Reynolds also noted that the judges seemed far more interested in the structure of her enterprise than her use of cannabis products. “Entrepreneurs are over the fact that it’s cannabis,” says Reynolds. “Now they want to know how you’re going to grow your business.”

VCET founder David Bradbury concurred, saying, “This company presented a compelling business case, market knowledge, and potential for local impact for non-THC, hemp based product suite. The three independent judges selected her firm as best potential for the $20k prize based upon what they saw and heard.”

Reynolds also believes that the experience can help open up more doors for cannabis businesses to reach beyond their own immediate cannabis community and to connect with more conventional businesses.

“My belief” says Reynolds, “is that we represent the appeal to all business folks and entrepreneurs because our strong desire to collaborate with businesses outside of the cannabis realm is showing to these other ancillary businesses, that we need you guys — we need PR, we need marketing, we need web developers, we need people to demo, people to get into this industry who already have established businesses.”

Elmore Mountain Therapeutics plans to use the new influx of cash to invest in  automated packaging equipment to help meet the booming demands of their product and capture market share.

The pitch event was made possible by the support of the Vermont Technology Council, The Sultanas Group, the Vermont Community Foundation, the Vermont Women’s Fund, Middlebury College’s Innovation Hub, and Hotel Vermont.

Listen to Eli Harrington’s full interview with Ashley Reynolds, including how she thinks the Vermont cannabis scene will evolve, what the emergence of national companies like Coca Cola could do, and her advice for fellow entrepreneurs.