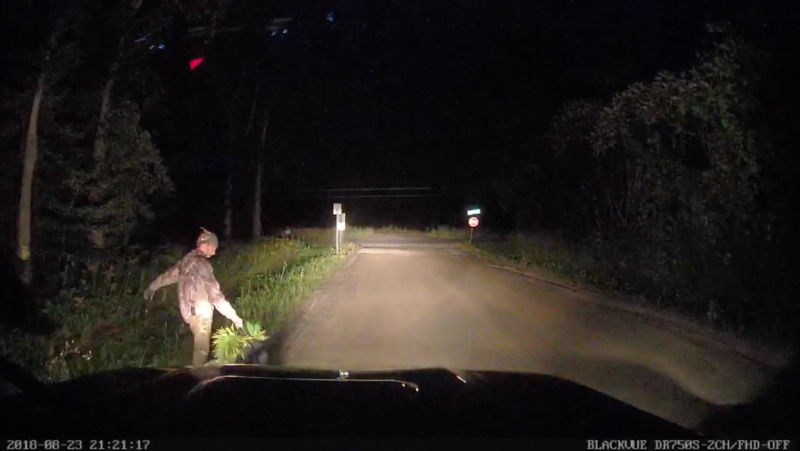 BURLINGTON, Vt. — Registered hemp farmer Nick Grelich has around 600 plants in his field in Essex Junction.

Nearly all of Vermont’s 400+ permitted registered hemp growers are growing high CBD strains of cannabis that resemble — and smell — like their THC-laden counterparts. With the number of hemp farms in Vermont having quadrupled over the past year and 2018 outdoor harvest in full swing, a number of farmers across the state have reported thefts, property damage and significant financial loss in the past several weeks.

Humble Roots Horticulture founder and registered hemp farmer Fred LeBlanc has had around 400 plants stolen from his fields, across more than six incidents total, ranging from mid-August to the most recent incident on September 23.

LeBlanc has kept video records of all the incidents, which have led to citations and arrests.

“We’ve had several complaints of theft of hemp plants from registered farmers,” said Sergeant Francis Gonyaw of the Colchester Police Department. “It is something that we’re taking seriously, plants are considered property and theft — and destruction of plants are treated as a property damage and theft.”

Grelich says that most of his plants were clipped from the very bottom or had most of their branches torn off forcefully. “For a period of about 10 days, we were losing plants. It was way before they were mature, [they] had just started budding,” he says.

“My feeling is that some of the guys might be intending to mix it with marijuana that they buy, then they’ll double their quantity of what they’re selling,” Grelich says. “People will smoke and not know what’s going on.”

The majority of hemp farmers, as required by state law, post large and numerous signs around their fields that clearly mark their plants as non-THC containing industrial hemp. Could it still be likely that those trespassing onto property are mistaking plants for THC crops? Or are they trying to pass off CBD as its psychoactive cousin?

“It’s hard to say, it’s possible people are confusing hemp plants with THC, and also possible that people are knowingly stealing hemp and trying to pass it off and sell it as marijuana,” said Sgt. Gonyaw.

LeBlanc believes it is a combination of both, and that publicly available addresses from the Agency of Agriculture and the recent changes on July 1 caused an uptick in hemp theft.

“We, of course, thought that after the first hit, people would take it home, dry, smoke, and realize it wasn’t marijuana,” says Grelich. But the subsequent, and larger, thefts that took place in the days following made him wonder.

“My feeling is that some of the guys might be intending to mix it with marijuana that they buy, then they’ll double their quantity of what they’re selling,” Grelich says. “People will smoke and not know what’s going on.”

An Ounce of Prevention…

With hundreds of plants stolen in just short of a month, LeBlanc has taken dramatic security measures to protect his remaining plants. He’s posted numerous security cameras along the interior perimeter of the property. The cameras instantly alert their phones with a notification if there is any movement on the property. The company maintains a 24/7 presence on the property, and he and his employees wear level 3+ body armor and carry non-lethal pepper spray and paintball guns.

Harper says listing a PO box is the best immediate action that growers can take to limit their exposure to their field location.

Does all of this theft make the Agency re-think having farmers’s addresses publicly available? “At this point everyone is actually growing for the agency as part of a farm bill compliant research pilot program, which is subject to disclosure. So it’s not protected information,” says Vermont Agency of Agriculture Agrochemical Program Manager Cary Giguere.

Harper says listing a PO box is the best immediate action that growers can take to limit their exposure to their field locations. Currently, the Agency has 412 total registered hemp farms, 88 of which have listed a PO box as their address.

LeBlanc, however, says that he sent out email to the Agency of Agriculture shortly after the list became public information — last winter — to have his address changed to a PO box.  “I never got response,” he says. “25 dollars a year for admin duties, why couldn’t they update the address?”

Since the last large theft, and with the field nearly ready for harvest, Grelich and his partner have also taken extra security precautions, mounting security cameras, posting extra signs, and having a presence in the field day and night. “We’re pitching tents and sleeping in cars,” he says.

“We have an area near a busy road,” says Grelich. “We don’t have a fence up. It was easy enough for somebody to come in.”

Beyond a change of address, Harper says that monitored systems are extremely effective at deterring intruders, and that for home gardeners that are growing outdoors, an exterior garden alert system is an affordable option.

“It is important to note that the state mandates that your garden is secured,” Harper says. “There is no language that describes how this should be accomplished but common sense and some technology can go a long way.”

Law Enforcement: Helpful or Not?

Grelich says he estimates the financial loss of his crops total around $40-50,000. “That level of theft is a felony. Grand larceny,” he says. “We’re probably going to offer an award for information that would lead to an arrest — After we get plants out of the field, because we don’t want to call attention to it.”

The roughly 400 plants stolen from Humble Roots, LeBlanc says, have a minimum value of $500 per plant, totaling around $200,000 in overall financial loss — not to mention an additional amount spent on hastily upgraded security measures, and hundreds of hours spent by his team to counteract and prevent further losses.

“We did a wonderful job growing out here this year, and we’ll do it again.”

Since the thefts from Humble Roots’ fields began, 12 people total have been cited, with the charges ranging from trespass to unlawful trespass to grand larceny. “I’ve been very grateful for the help from the Colchester and Milton police,” LeBlanc says. He says that, after being alerted via phone by onsite cameras, he and his employees have been able to get to the field in under two minutes every time.

Grelich, conversely, feels that the law enforcement on his end, in Essex Junction, has been “slow and really inadequate,” saying that he pointed the police directly to the main suspect and they conducted a “pathetic” inquiry. “They have a detective on the case, but we haven’t heard a word [about] it,” he says.

Yet, despite the thefts and police inaction, Grelich remains undeterred about his future prospects as a hemp farmer. “We still have beautiful plants in the ground,” he says. “We did a wonderful job growing out here this year, and we’ll do it again.”