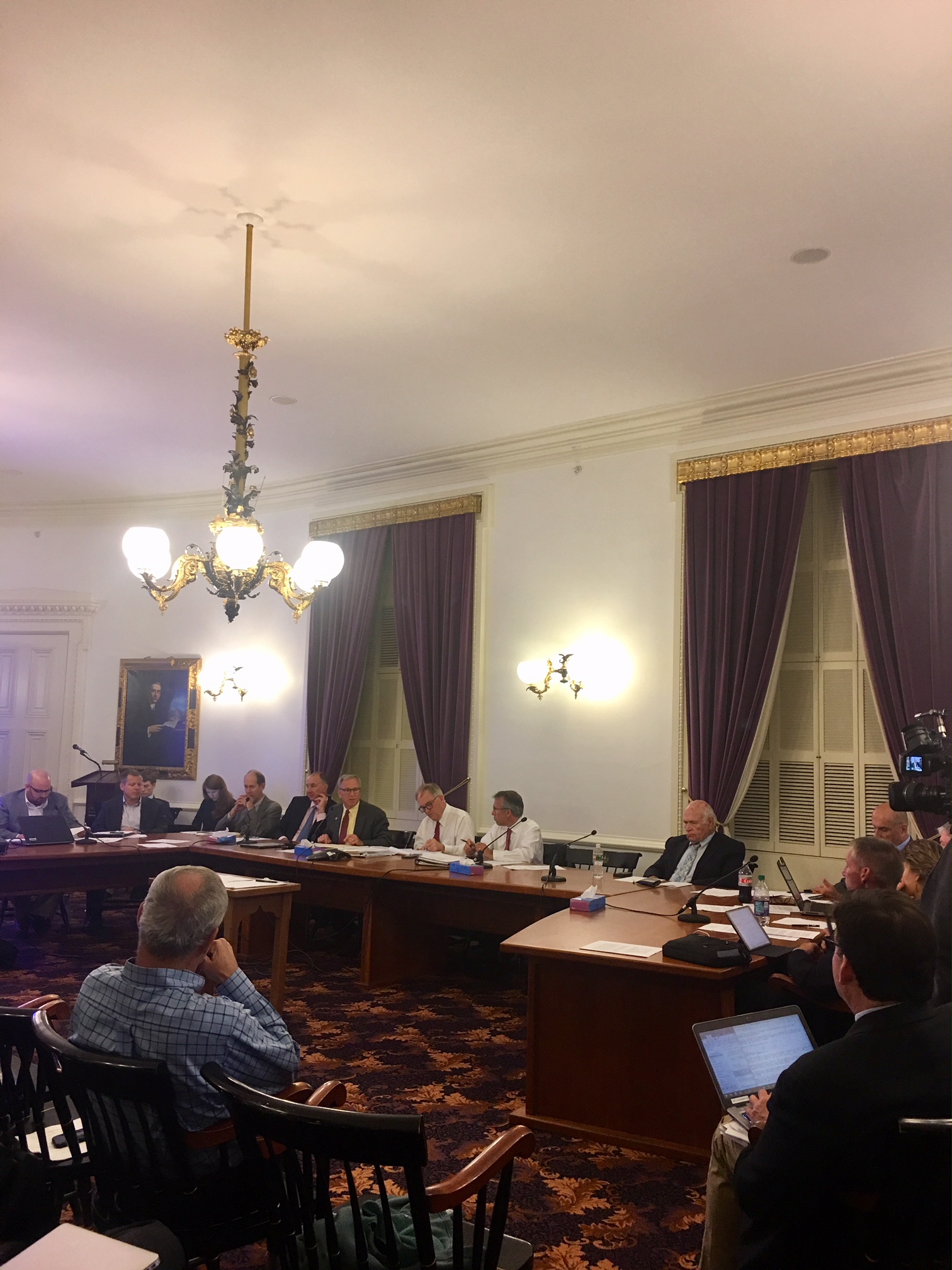 “Assuming the state of Vermont were to make the choice to tax and regulate through the legislative process, what would be the best way for Vermont to implement that process?”

Vermont Republican Governor Phil Scott’s Marijuana Policy Commission, co-chaired by Tom Little and Jake Perkinson, held a public presentation on Monday, September 10, in room 11 of the Montpelier Statehouse, to provide updates from its three subcommittees, in anticipation of the December 15th release of its final formal report and recommendations.

Created in fall 2017, the stated purpose of the Marijuana Policy Commission and its subcommittees is to “evaluate the experience of other states, credible research and available data to inform recommendations to the Governor.”

The three subcommittees’ stated purposes are as follows:

“A subcommittee on roadway safety will examine and present findings on drugged driving, and recommend appropriate measures to ensure roadway safety. A second subcommittee on education and prevention will focus on how best to measure impacts on public health and how to restrict access to marijuana by minors. Finally, the taxation and regulation subcommittee will be charged with finding a responsible approach to the sale and taxation of marijuana for recreational use, including assessing the structures for doing so, and resolving third-party liability issues such as banking, local zoning and insurance.”

“We hope to frame the purpose of our goals and our work from now until our final report in mid-December,” said co-chair Tom Little in his opening remarks.

“Assuming the state of Vermont were to make the choice to tax and regulate through the legislative process, what would be the best way for Vermont to implement that process?” asked Little, before introducing the subcommittees.

The Education and Prevention subcommittee began the afternoon’s presentation. According to the Marijuana Policy Commission’s web site, this committee’s work “serves the purpose of examining and presenting findings on how best to measure and reduce impacts on public health; how to regulate edibles; how to regulate THC concentrations in marijuana and marijuana products; how to discourage consumption of, and restrict access to marijuana by minors; and how to effectively implement evidence-based education and prevention strategies for those under 21 years of age.”

“Youth is what we’re all about,” stated chair Dr. Mark Levine, Commissioner of the Department of Health. Dr. Levine first provided new data from the 2017 Vermont Youth Risk Behavior Survey, the results of which were released last May, and then discussed various findings regarding school-based programs and community-based programs, as well as concerns around various “delivery systems” for cannabis (edibles and infusables, to name two examples).

Levine then advocated for strategic solutions for youth prevention. “We are sold on the idea that, based on 2 decades of research, the most vulnerable time for adolescents globally is between 3 in the afternoon and 7 in the afternoon,” stated Levine, who went on to make a case for what is called “The Iceland Model,” a strategic youth prevention approach that works to enrich the after school environment with structured activities, because research indicates that youth are positively impacted by said programs, and thus less likely to use tobacco and alcohol.

Commissioner of the Department of Public Safety Tom Anderson, chair of the Roadway Safety subcommittee, followed up with his committee’s findings to date. The committee’s charge, according to the Marijuana Policy Commission’s web site, is to “serve the purpose of examining and presenting findings on drugged driving and recommend appropriate measures to ensure roadway safety. Additionally, this subcommittee shall pursue a regional impairment threshold for the New England states, and parity in drugged driving roadway safety laws and penalties.”

After pointing out that Vermont still lacks a reliable test for testing drivers who may be under the influence, he charted a course for the committee over the next few months. “Between now and the final report’s release in December, we will be updating our research on new studies re: substance abuse and road safety,” explained Anderson. “The other area we are looking at carefully is looking at research on ‘zero tolerance’ laws in the United States and Canada,” he concluded, “which means different things depending on which state you are in. This policy is all over the map, and difficult to measure.”

The Taxation and Regulation subcommittee finished the official portion of the public proceedings. Their mission, according to the Marijuana Policy Commission’s official web site, is to “serve the purpose of examining and presenting findings regarding the sale and taxation of marijuana for recreational use, and assess structures for doing so which addresses areas such as banking, landlord and tenant relationships, local zoning, insurance, host liability, economic sustainability, and reduction of the illegal marijuana market. This subcommittee shall assist the Roadway Safety and Education and Prevention subcommittees on identifying funding strategies and options for recommended resources and programming based on a taxed and regulated marijuana market and other resources.”

The “tax and regulate” committee presented options and discussion on licensing and registration fees, (“which will be important in early funding”) as well as on structural options like whether or not to allow for vertical integration. “Vertical integration should be permitted but not required,” the committee chair stated in his remarks. “Background checks should be required for permits,” and “using existing organs of start government like the Agency of Agriculture” are two other important considerations. “Questions like ‘how many licenses should there be in each category?’ are very difficult to answer,” stated the committee. A desire to protect small businesses is also paramount, according to the subcommittee, as well as dosage limits on value-added products, the banning of advertising to minors, and prohibiting the mixing of THC with other products such as alcohol, with exceptions being made for so-called “carve outs” in the medical field. Setting potency and dosage limits is also of importance.

One of the biggest challenges with taxation and regulation, according to the committee? How to deal with federal cannabis prohibition and its impact on banking, insurance, and other ancillary industries vital to supporting a potential “tax and regulate” model. “’Local control’” is another important area we are looking at,” they explained, “not only getting business structures in place, but allowing individual communities to make the decision about do they want to support this, or do they not want to support this, and what it would take for communities to change ordinance laws. “We also want to make sure that the medical marijuana market is still viable in a tax and regulate system.”

And what of revenue that might be generated by a “tax and regulate” system? “All three committees are working together to share data re: rates, fee structures,” explained committee spokespeople, hoping to “have the dominoes fall into place” by this December. “Our estimates are showing that any generated revenue will probably fund our desired programs and not have a whole lot left over,” according to their latest projections, which they estimate at between $15-20 million annually.

In closing the official proceedings, co-chairs Little and Perkinson asked the three subcommittees to submit written reports detailing their anticipated work plan for the next two months, in advance of a proposed “listening tour” around Vermont scheduled for this coming November.

In subsequent public comment, citizens shared a number of ideas and concerns with the committee. One citizen advocated for the creation of a legal cannabis industry able to grow and deliver high quality and consistently available legal cannabis to ensure competition with the existing underground market, as well as for a broader definition of edibles as a legitimate palliative for medical conditions. Another expressed opposition to legalization, as it might attract alleged “undesirables” like transients and potentially homeless populations.

Heady Vermont co-founder Eli Harrington advocated for a structural strategic approach that accounted for the 6,000 medical marijuana patients who are “not being served by the current regulatory paradigm,” as well as reframing the debate in support of a more robust “tax and regulate” system.

“Lack of supply, lack of independent testing, and lack of competition are all hampering our strategic approach – how will we increase our legal supply in Vermont by a factor of 10, or 100?” asked Harrington. “If we want to do this right and get started – we need supply, we need testing, and we need competition, and we need it now.”

The three subcommittees of Governor Scott’s Marijuana Policy Commission plan to release their final report to the public on December 15, 2018. For more information, visit their official web site.