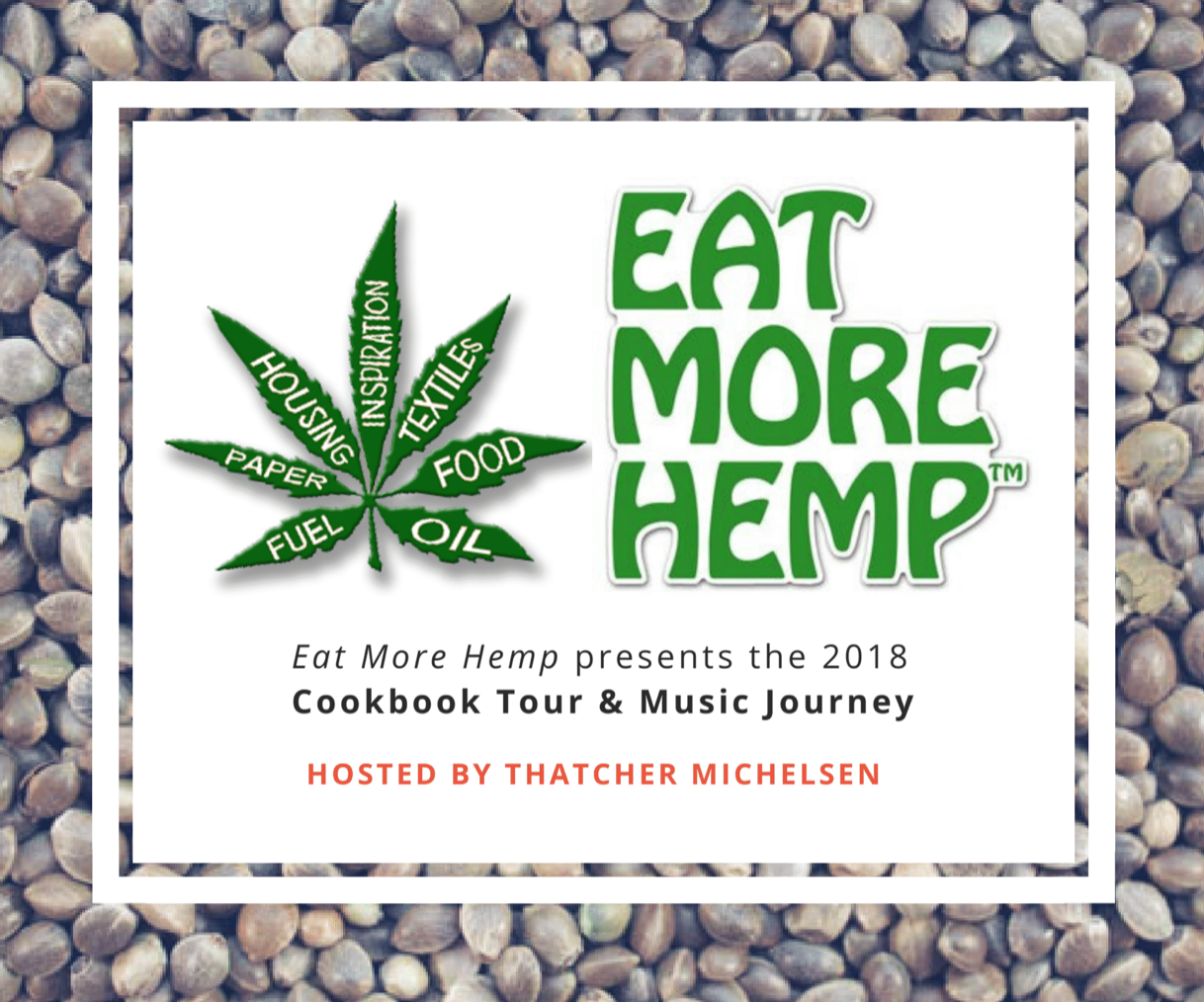 “I often describe Eat More Hemp as the GotMilk? for the hemp foods industry,” Thatcher Michelsen of Eat More Hemp, this week’s Hemp Fest 2018 featured Sponsor Spotlight, explains. “I am working on a collaborative cookbook/storybook and a video series where I’ll be traveling the country in order to produce recipe content with hundreds of famous chefs, doctors, and athletes. Imagine a full size tour bus with custom graphics, as well as a pop up hemp experience with education and boutique, and throw in an online 3rd party verified marketplace for hemp foods and CBD products.” Back story? Michelsen grew up in the southern Vermont Manchester/Dorset area, the youngest of four siblings, with three older sisters. His oldest sister Melissa was responsible for getting him initially interested in hemp, suggesting that he learn about it when I was just 16. “I found, read, and extensively researched the book titled The Emperor Wears No Clothes by Jack Herer,” Michelsen recalled. “I’ve been an entrepreneur all my life – I started my first business in 5th grade making maple syrup branded as Thatches’ Batch with a custom logo I hand drew and photocopied as labels. By 8th grade I had a post and beam sugarhouse and stainless steel boiler, tapping hundreds of trees on Mount Equinox.” And now?

“I see Vermont as leading the high end high quality marketing of hemp foods and medicinals,” Michaelsen explains, “and likely a leader in breeding and genetics research.”

Michelsen’s father is a famous woodworker and artist, so Thatcher was lucky to travel  with him attending art shows and woodworking symposiums. Although he went to UVM in 1999, he dropped out to start a successful real estate software company begun in his dorm room, and went on to help form the Vermont biofuels association in 2003, and then started two clean energy companies called 2Renu and BioQuantum. Michelsen then moved to NYC in 2007, where he started a social media marketing company called Wmedia. Selling it in 2012, he gained the opportunity to move to Venice Beach, California, where he discovered CBD and founded EatMoreHemp as a side project of his new advertising company called AdCurv. “In 2015, I moved back to Vermont to tell everyone about CBD and to start growing hemp, and I was met with endless no’s and lots of resistance,” Michselen remembers. “People looked at me like I had three heads. The price you pay as a being a thought leader.”

Is there a hemp and cannabis sea change here in Vermont? “Absolutely. I am seeing a sea-change and it’s happening rapidly,” says Michelsen. “The fact that I was turned down by so many potential investors and farmer partners early on didn’t stop me or even slow me down. I put more energy and effort into getting the word out there.” Michelsen explains he worked on his public speaking skills, and he has spoken at NASDAQ and Harvard already this year on the truth about cannabis. “I’m just getting started and plan on working with 1000’s of farmers, processors, manufacturers, and more world wide,” he states.