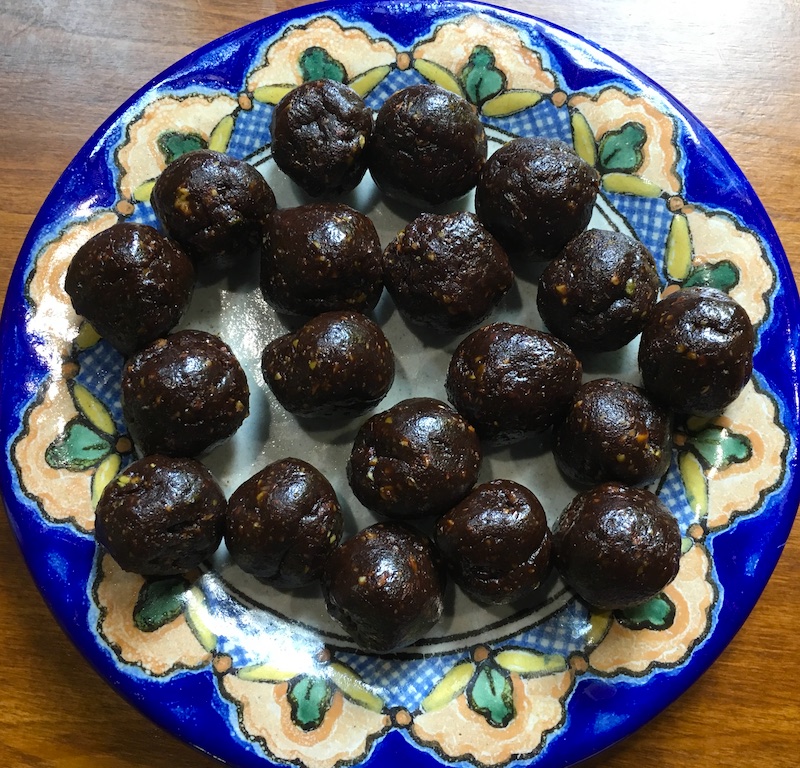 During my recent search for a good bhang recipe, I stumbled across an interesting tidbit of info about a classic Moroccan treat called majoun. A mixture of dates, nuts, spices, honey, chocolate, and cannabis, majuon was supposed to have been the inspiration for the legendary brownies baked by Alice B. Toklas, about which was written:

“This is the food of paradise–of Baudelaire’s Artificial Paradises: it might provide an entertaining refreshment for a Ladies’ Bridge Club or a chapter meeting of the DAR. In Morocco it is thought to be good for warding off the common cold in damp winter weather and is, indeed, more effective if taken with large quantities of hot mint tea. Euphoria and brilliant storms of laughter, ecstatic reveries and extensions of one’s personality on several simultaneous planes are to be complacently expected. Almost anything Saint Theresa did, you can do better if you can bear to be ravished by ‘un évanouissement reveillé (which translates as “awake fainting”).’”

Extensions of one’s personality on several simultaneous planes are to be complacently expected? Ravished by awake fainting? Sign me up!

I found a recipe over at Infused Eats, which claimed that majoun can be considered a “powerful, sweet snack, dessert or breakfast dish.” Given the amount of flower in the recipe, it’s hard to imagine what you could possibly do after breakfast, but we’ll go with it for now.

The ingredients are pretty straightforward: First you chop up the cannabis (I used my handy-dandy bullet blender) and cook it in the butter. The recipe says to use a heavy pan. My cast iron skillet seemed to do the trick.

Then you add the nutmeg, ginger, and anise. Then you add the water, honey, and chocolate (I prefer Callebaut Belgian dark chocolate chips), and mix it well. Then you add the raisins (if you’ve got ’em), dates, and pistachios and cook for about 20 minutes until it’s all soft and gooey. It looks a little gross, but don’t be intimidated.

After it’s cooked, you pop it back in the blender to make a paste. Then you stick the mixture in the fridge for a while to cool. Once it’s congealed, you roll it into small balls. I scooped up the goo with a tea spoon, and rolled approximately 1-inch balls, which I sensed would make for a good dosage size. Of course, the most important step is to field test them on your friends and co-workers.

I shared samples with Heady Vermont’s Eli Harrington and Kevin Driscoll, who both vouched for the appropriate size of the dosage (Kevin: “That felt nice!”) and the tastiness of the treats (Eli: “I love dates!”). Eli did come back to me later and say that it got him pretty wasted, and that it was a “behind the eyes” kind of feeling, as opposed to a body high.

It sounds like he had more of an awake fainting situation than he did encountering extensions of his personality on several simultaneous planes. I don’t know whether his experience came from the recipe or the ingredients, but, given that I made this with flower from a jar labelled “Random Bud,” it could have been pretty much anything.

I’ll also say that from a flavor perspective, this is not a mild snack. It’s kind of like industrial strength Fig Newton filling. With weed. Personally, I found it a little date-heavy, but Kevin and Eli were totally fine with the datey-ness, and will be the lucky recipients of the rest of these little Spheres Of Delight.

One thing which did occur to me was that if you dipped them in dark chocolate, you could have a Miracle Pill on your hands…

Try ’em, enjoy, but remember to wait at least an hour before you go swimming.