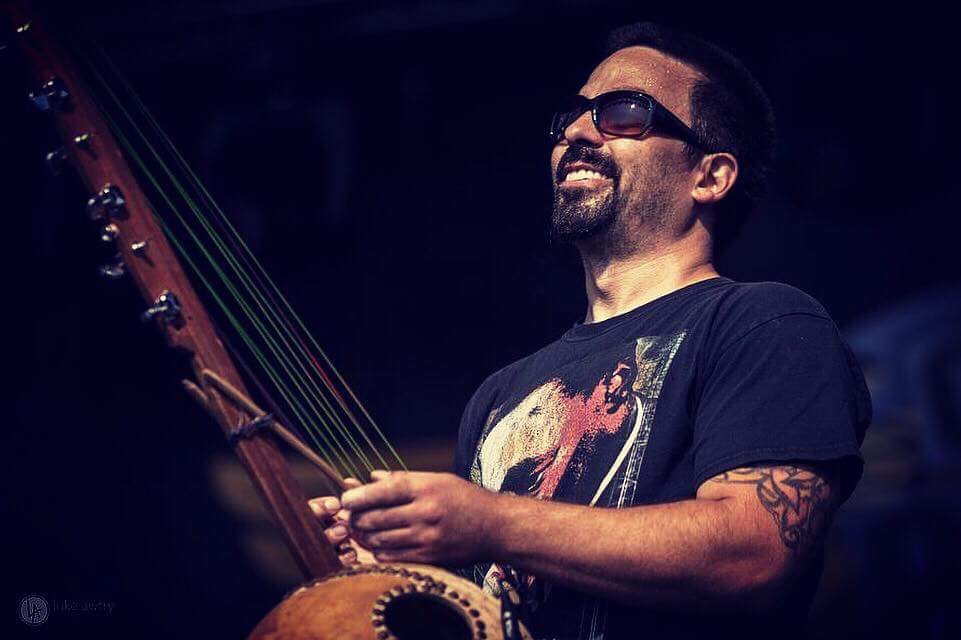 The sweet smell of legalization is in the Vermont air as we are less than a week away from July 1st. In anticipation of the weekend festivities we decided to chat with ngoni genius Craig Myers. With us, the Barika front-man discussed his life-long “friend,” his hopes for the future industry, and the education he believes all should pursue.

HVT: Hi Craig! I’m excited to chat, it’s been a while. What have you been up to over the past few months?

CM: All kinds of stuff. Barika is working on a new album right now, and we’re almost done finishing the tracking the on that, which is pretty cool. So yeah, it’s been a thing just chipping away for a while now, but it’s almost there, and we’ll move on to the next thing.

HVT: Well I’m excited to see you play next weekend, and speaking of which… are you looking forward to the July 1st celebration?

CM: Absolutely! Yeah, I’m really excited for it. I really like Willow Crossing Farm; those guys are always super nice to us. I mean, what a better place or better reason? Come on? Let’s have a good time!

HVT: Why was this gathering something you wanted to be a part of?

CM: Well I believe in herb as medicine. You know? And I think people should have access to it. And also, just a collaboration with Monica and Heady Vermont. She’s always been a super great person in the community, and I love spending time and laughing and hanging with them. As well as Kori Gelinas over at Willow Crossing Farm. I like it when it’s more of a family affair, and kind of like a community celebration. Versus going to a place I’ve never been. That’s also fun, but it’s nice when you know everybody, and it feels like a family.

HVT: How would you describe your personal relationship with cannabis?

CM: I mean I use it pretty much every day, just little bits here and there. It’s been in my life as far as I can remember, since like eighth grade (laughs). And I’ve always kind of been involved in the industry, working with various people out west. It’s always been there for me, and I’ve never seen any negative side effects from it. Socially, it’s only kind of brought people together and helped them calm down if that’s what they needed. For myself, it’s kind of like an old friend that’s always been around.

HVT: How about your musical relationship? Has it had any sort of an influence over what you create?

CM: Yeah, most likely (laughs). Like I said, it’s kind of always been there. And it’s not a thing where I’m smoking all day long, but I definitely use it for creative inspiration and influence. Often times before a show, I’ve been known to take a couple hits of weed, and it creates this kind of creative possibility, you know? I guess that would be the way to describe the feeling. It can open up a lot of creative possibilities and I like that about it.

HVT: And I’m sure that goes for those who are listening and engaging with the music as well.

Well, with any of this legalization, I really hope that we keep it in the community and allow farmers who have been crafting and cultivating the herb for so long to continue to be able to do so without the big businesses coming in and trying to squash the little guys.

HVT: Remind me, did you grow up in Vermont?

CM: Yeah. I was born in Burlington and grew up in Essex.

HVT: Do you feel that the legalization was a long time coming for the state?

CM: Yeah. I kind of feel like Vermont has been studying other peoples’ examples. You know? And trying to figure out how we want to legalize it, and which way makes the most sense for us. So, I do think it’s been a long time coming. Vermont takes their time and wants to see what will happen. Nobody wants to make mistakes, so just observing like I said the ways in which other people, California, Oregon, Massachusetts, and Maine, all these places have been doing it, and then find the model that works best for us. So, it seems to me that’s why it’s taken so long.

But it’s always felt decriminalized to me. I’ve never run into any big problems in Vermont, and I’ve always felt pretty safe with my openness of being a weed smoker. I feel like it’s always been a pretty tolerant state, and now it’s just coming to its own with the legalization.

HVT: What do you hope to see come about from this new bill? In Vermont, and even the states that could eventually follow in its footsteps.

CM: Well, with any of this legalization, I really hope that we keep it in the community and allow farmers who have been crafting and cultivating the herb for so long to continue to be able to do so without the big businesses coming in and trying to squash the little guys. Like the dairy industry back in the day in Vermont. So, I’m really hoping we can keep it in the community and allow those who have been growing it to make a living off of it. I guess that’s my biggest concern. And with any legislation being written, I hope that they’re considering the little people… if we want to say little people. You know? Just smaller money, and not letting big business come in and capitalize and dominate the industry.

And beyond that, just giving cheap and proper access to medicine for cancer patients, and all these people on a medicinal front. That’s most important to me. Because I do believe it can be recreational, and it is recreational for a lot of people, but the medicinal properties are undeniable. It’s helpful on so many levels, and I hope that people are able to have easy and proper access to the strength that they need.

HVT: At the celebration this weekend there are going to be numerous learning opportunities for attendees. Following the legalization, do you think it’s important for people and organizations to continue hosting similar events? That way, people can continue to educate themselves on the plant and the industry.

CM: I think it’s super important for the awareness to develop around the properties of the plant beyond this old school idea of a bunch of stoners sitting around with a bong, eating popcorn and candy. Sure, that exists, and there’s nothing wrong with that. You know? But for the people that are scared of marijuana, or simply don’t know, and have always thought of it as a drug and a crime, to be educated is super important. I think at these festivals or celebrations, it’s super important to educate people in all the different ways that it’s used, and its medicinal properties. So, I think higher education in marijuana is crucial. If we’re going to put these things on, I’d say even before the music, the educational awareness programs are most important.

HVT: I agree with that. Before we wrap this up, does the band have any exciting plans for the summer you’d like to share?

CM: Yeah let’s see, July and August we’re taking a little break from playing while we finish up this album. I’m going to be in the studio working on mixing and mastering that. And then September 14th, we’re having Barika’s fourth album release party at Nectars. That one I’m really excited about! We’re basically going out and doing a big tour in September. So, July and August finishing up the album, and then September start rolling on tour for the album support.

HVT: That’s all very exciting! Thank you so much for chatting with me, Craig. I’m looking forward to seeing you guys this weekend.

You can catch Barika this Sunday July 1st at Heady Vermont’s legalization celebration at Willow Crossing Farm in Johnson, Vermont.