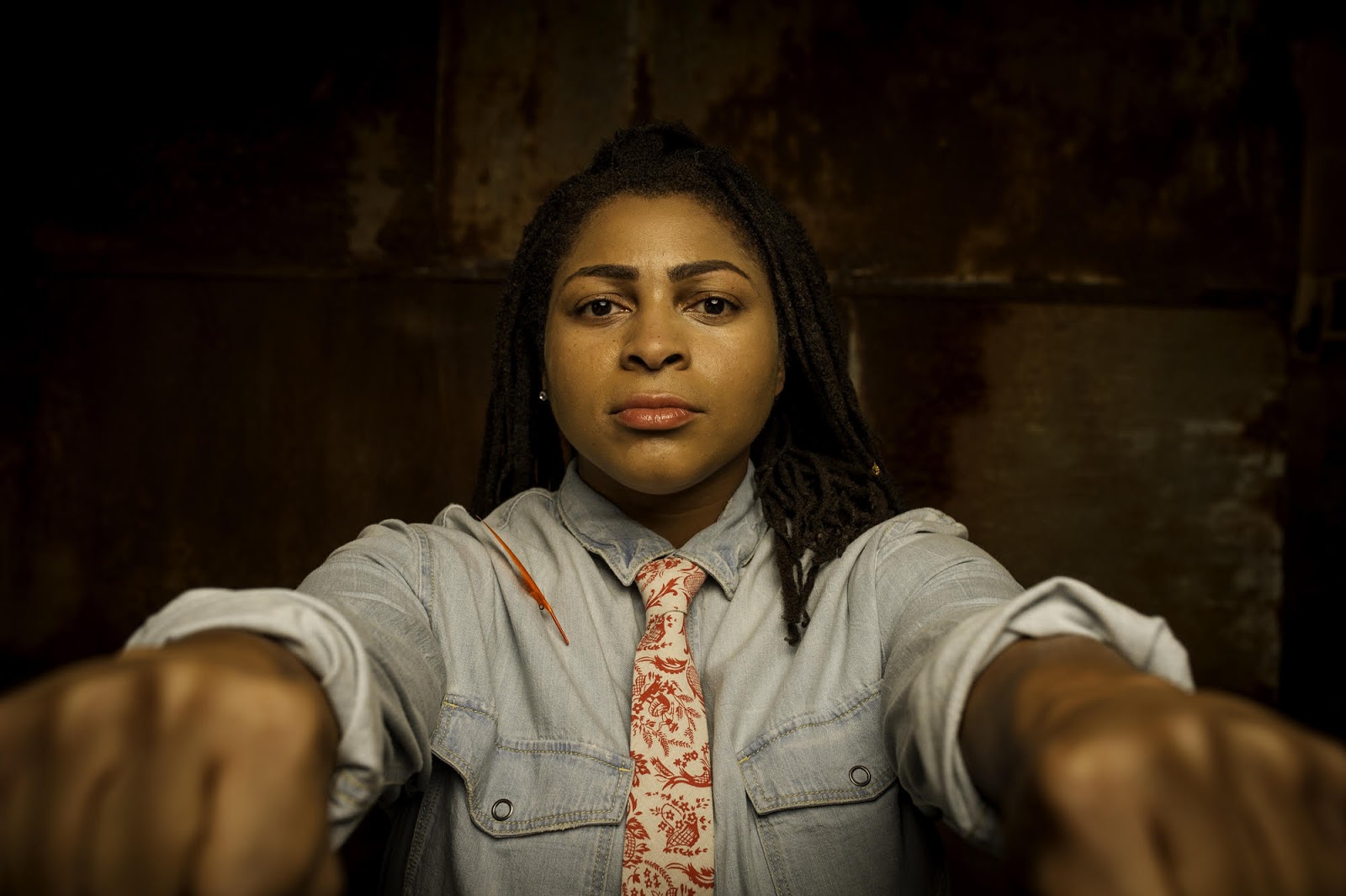 The Nth Power has arrived in Burlington, eager to spread the love throughout their upcoming Burlington Discover Jazz Fest performances. Yesterday we caught up the band’s powerhouse drummer, Nikki Glaspie, to discuss her craft, her dominance in a male-oriented industry, and the band’s plans for their shows in Vermont.

HVT: Alright, well we’re definitely going to talk about Jazz Fest, but I’d love to begin by learning a bit about your musical background. In interviews of yours that I’ve read in the past it seems that your family was very influential in your playing. Were they the ones that encouraged you to take up the drums? Or were you naturally drawn to the instrument yourself?

NG: I was naturally drawn to the drums. I started playing when I was two. So, I just wanted to do it, and I kept begging my parents like, ‘drums, drums, drums’, before I could even formulate sentences. So that’s always been there. My dad played saxophone in high school and stuff, and he was a huge music fan and music lover. And my mom plays keys. She plays keys in church still to this day. So, I grew up playing music with her.

HVT: I assume they must have been supportive of your decision to begin playing music.

NG: Yeah, definitely. At the point that I told them I wanted to be a musician, that was a little different. They weren’t exactly sure how I would do it. You know what I mean? But they were still very supportive, and instrumental obviously in getting me to Boston, and starting me on my professional music journey.

HVT: And you played the drums in church growing up right?

NG: Yeah, I played the drums in church. The pastor’s son was the drummer for a really long time, and when he left I took over. So, I was probably playing around 10 years old for the church. Then I moved to North Carolina when I was 13, and eventually found a church to play at, but it was different than where my mom played because they already had a drummer. So, my mom would drop me off at my church so I could play, go to her church and play, and then come pick me back up after service.

HVT: That’s too funny. Are you happy to have those gospel roots in you, and in your playing?

NG: Yeah, absolutely. The thing about gospel music is that there’s a message in it. It’s all about that, it’s all about God, and life, and love, and hope. I took more of the message with me than the music itself. I have a firm and moral structural background. My morals are intact. You know what I mean? Just coming from that type of music and growing up listening to positivity.

The overall message is love, and if you love yourself and the people around you, we can make a better place.

HVT: And that certainly seems like something that you’re still trying to spread today with the music you’re creating.

NG: Absolutely. I try and take the religion out of it. That’s not for everyone, but love is. People have certain beliefs, but I don’t believe that’s a reason to alienate. You know what I mean? It’s more about bringing people together rather than separating them because for instance, someone believes you shouldn’t wear pants. It’s little things like that that I don’t subscribe to, and that’s what comes out of the music. The overall message is love, and if you love yourself and the people around you, we can make a better place. I truly believe that. There are so many people that walk around not knowing that they’re loved, so we try to create that feeling, or give that feeling to people whenever they see us play. HVT: And do you think people are feeling that?

HVT: Do you feel that cannabis has had an influence on your music, in the past or present?

NG: In the past for sure. I used to be a heavy weed smoker, but I haven’t been smoking as much as of late. But it definitely had an impact on the music. I think that weed for me allowed me to not think when playing music, but also, to think as well. You know? I can smoke a joint and think about all the world’s problems. Or I can smoke a joint and be completely creative and come up with songs and ideas.

HVT: As of July 1st, cannabis will be legal in the state of Vermont. Do you have any thoughts on the new law?

NG: That’s great. That’s incredible. That’s amazing. That’s my thought (laughs). Now, the way that I guess I would say I “partake” in weed, is strictly for medicinal purposes. You know? And I have seen the benefits from it. CBDs are amazing, they really are. They’re pain relieving, and you can actually start to rebuild cells, and synapses, and things. There’s been lots of studies, if anybody wants to check it out they can, but I love CBD.

HVT: To switch gears now, an initiative at Heady Vermont is uniting women, and we’ve been doing a Women of Weed Wednesday, which features inspirational females. That being said, you play what is commonly considered a male-dominated instrument, in a male-dominated industry. So, you truly set an amazing example of living to your full potential regardless of what gender you are.  Would you say that you’ve ever experienced any difficulties rising in the ranks of drummers based on the fact that you are a woman?

I would say that my experiences regarding music and sexism were very early on … And it was kind of fuel for the fire. I used it, and thought, ‘you know what, you can outplay anyone, male or female.’

NG: I mean yeah, at first I did. Starting out playing at church, I’d be like, ‘oh I’m the drummer,’ and they’d be like, ‘no you’re not.’ You know what I mean? But honestly after I got the Beyoncé gig, I started playing for her when I was like 22, that all kind of went away. I mean, if I couldn’t play, then I wouldn’t be playing with her.

So, after a couple of years playing that gig, and then playing with Dumpstaphunk, people respect you. I would say that my experiences regarding music and sexism were very early on. You know? And it was kind of fuel for the fire. I used it, and thought, ‘you know what, you can outplay anyone, male or female.’ I know it still exists…. clearly. I would just say that my reputation preceded me. So, I think a lot of guy musicians regard me in a different way because of my resume.

HVT: It is quite the impressive resume. Now that you are an established musician, do you find it important to encourage all the young girls out there just starting out?

NG: Absolutely. I would say that I’m living proof. I’m an example that you can do it. You can establish yourself and play with whoever you want to play with. You can do whatever you want to do, and the music can take you wherever you want to go. But the thing is…that that doesn’t happen without other fellow female musicians.

When I started coming up here when I was 18 or 19, I met Dave Grippo and Jen Hartswick. Seeing Jen and playing with her was super awesome. She kills the trumpet and is an amazing vocalist, and it’s like yeah, we’re out here! And I’ve had the pleasure of playing with a lot of other females that are amazing at what they do. They’re amazing instrumentalists, and amazing musicians, and not only that, but amazing people. And that’s something that’s reflected in the music as well. You know? If you’re an amazing person most of the time, the music reflects that.

HVT: And Jen and Dave will be playing with you tomorrow night, right?

NG: They will be!

NG: It really is. I haven’t been on the stage with both of them together in like 15 years.

NG: It really is. Last year I did a gig with Grippo around this time, and it was awesome because we hadn’t played together in a long time. And I play with Jenny every now and again. We played at Jazz Fest in New Orleans this year, and it’s always awesome to share the stage with her because she’s such a talent. And we’ve also got Bryan McNamara and Kofi Burbidge! It’s going to be amazing. I’m so happy and honored to be playing with such amazing musicians. HVT: What inspired you to do the Steely Dan tribute?

NG: Well we had done the show a couple of years ago at the Wanee Festival in Florida, and I think the guys were asking for it here. Someone called us up and said they wanted us to do Steely Dan, and we were like, ‘well we’ve done it before so yeah, we can do it again.’ So, it’ll be strictly a Steely Dan tribute, and then on Thursday when we play at the Waterfront it’ll be all original music.