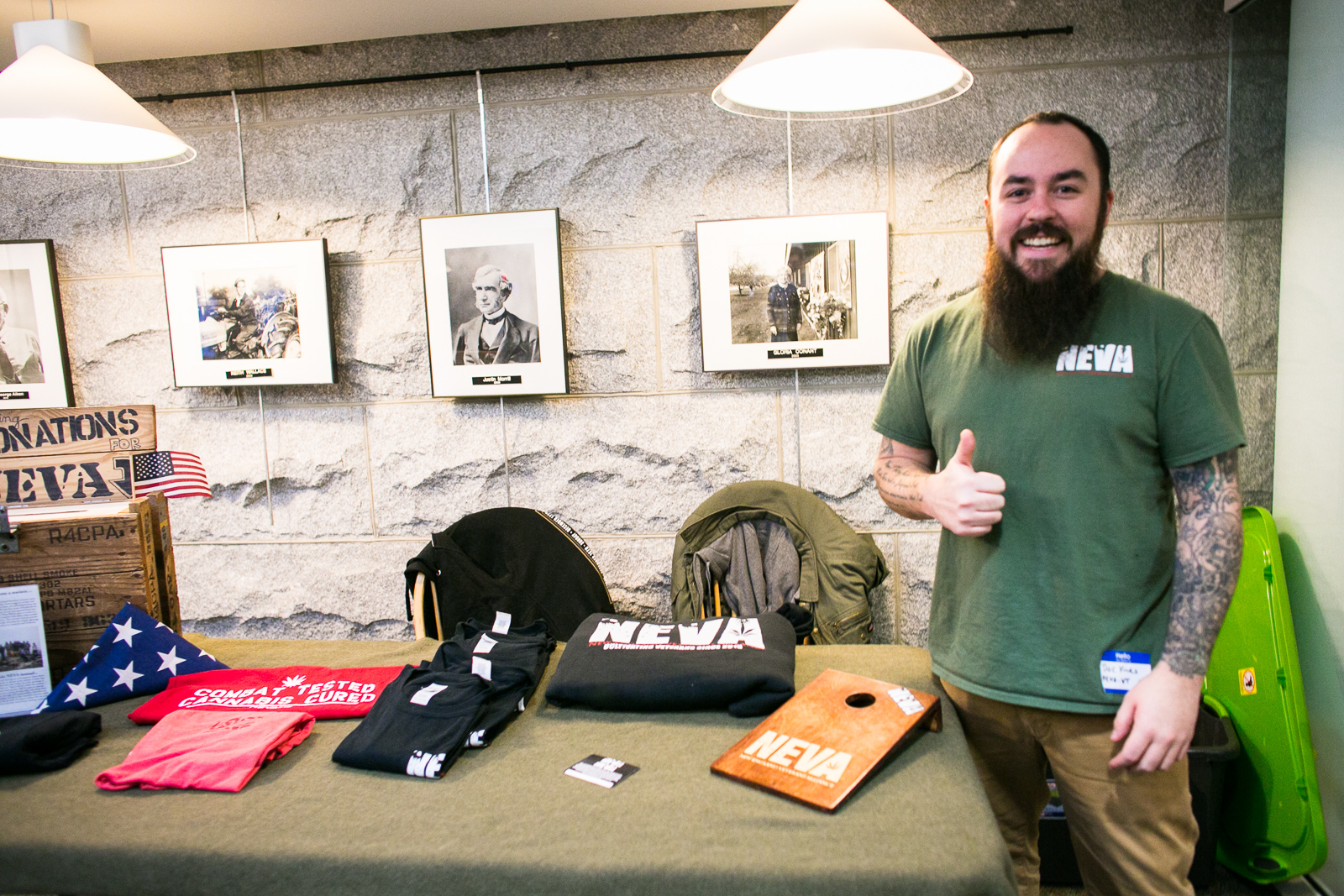 Doc Vines, President of New England Veterans Association – Vermont, was deployed to Afghanistan in 2011 as a medic with the Army National Guard. He came home with Traumatic Brain Injury (TBI) and Post Traumatic Stress Disorder (PTSD).

Vines frequently notes that while the Army National Guard sent him to Afghanistan, coming home, “I figured out on my own how to not reintegrate correctly.” Vines fell prey to common pitfalls facing veterans when they return to civilian from active service, including relationship problems, alcohol and substance abuse, and getting “caught in vicious cycle of unhealthy routines.”

Another common experience Vines shares with many vets was his experience of walking into the Veterans Administration in late 2011, and walking “right out with pain pills right off the bat.” He says, “I got no counseling about how to manage opioid-based medication. It was just: Oh you want pain to go away? Here you go.”

Ultimately, cannabis has been the key to Doc’s recovery, helping him get off the pain meds and heal his PTSD and TBI. “My memory was much worse before my daily use of cannabis. It wasn’t something that came back fast. The cannabinoids have helped the receptors in my brain to heal themselves. Also, my migraines are gone.” Vines explains, “I used to get 20 migraines a month. Now I get one or two per month.”

NEVA’s focus on networking and advocacy “helps vets feel safe and have a sense of direction again,” says Vines, and basically uses cannabis “as a gateway for getting vets together.”

One of the greatest challenges to his work, says Vines, is battling cultural stigmas around the use of cannabis, and the military’s historic preference for alcohol as its substance of choice.

One of the greatest challenges to his work, says Vines, is battling cultural stigmas around the use of cannabis, and the military’s historic preference for alcohol as its substance of choice. “We have this huge culture in the military behind drinking. It’s in all the VFWs and legion halls,” says Vines, “Often I try to get a vet’s attention, and he dismisses me as some kind of New Age Hippie.”

In light of Memorial Day, Vines suggests that one of the best ways to honor fallen comrades – whether on the battlefield or due to suicide and drug addiction – is for veterans to take better care of themselves and “not let ourselves slip through the cracks in a crappy VA system.”

For civilians, and the friends and family members of veterans, he says the biggest way to help is continue to be supportive and understanding.

“I know veterans can be a handful at times,” says Vines. “There are calm vets, but also blunt, up front, rough around the edges vets as well. With all of them, the best thing is to cultivate compassion towards them,” and understand that substance addiction isn’t a moral or ethical failing, or lack of willpower, but “like literally having a demon on your back. It’s like this battle and no matter how hard you try, your body and mind are fighting you.”

With growing acceptance around cannabis legalization, Vines is hopeful about the continuing capacity of cannabis to aid and assist the larger community of veterans. “What we’re able to do with cannabinoids is groundbreaking,” says Vines. “It gets people off prescriptions, but also helps you just feel happy again. It uproots our biggest problems and pulls individuals back out of war.”