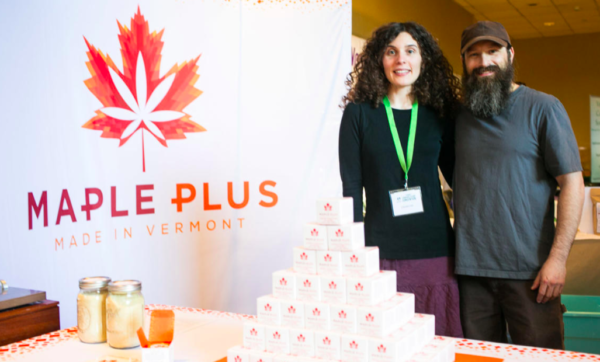 Question: What’s even better than maple syrup (or maple anything, really)?

This is the basic idea behind Maple Plus, a Jeffersonville company which makes organic maple sugar infused with CBD from a full-spectrum, CO2-derived, organically-grown hemp extract. Derek Mercury, the founder and innovator behind Maple Plus, grew up in Rochester, NY, went to Plattsburgh State University, and moved to Vermont 14 years ago, where he’s been doing everything from teaching snowboarding to managing real estate to studying cheese-making at UVM’s Vermont Institute of Artisan Cheese, where he learned about the ins and outs of commercial food production.

His favorite cheese to make, by the way, is halloumi, a 1/2 goat-1/2 cow boiled curd cheese which you can fry without melting. This cheese, as you might imagine, is a big hit with his friends.

To the great fortune of anyone lucky enough to be friends with Mercury, he also started making cannabis-infused candies. Then, because of the prevalence of maple syrup in Vermont, it occurred to him to try making maple candies. A growing interest in developing a product that was both simple and effective led Mercury to the CBD-infused maple sugar he’s marketing now.

Jars of Maple Plus come with a small plastic spoon, allowing users to standardize doses at 10mg a scoop.

While numerous products contain CBD, Mercury says the biggest thing that differentiates Maple Plus from other products in its class “is that maple sugar is soluble in water. Once in solution,” he explains, “it stays in solution. This makes it great for any type of infusion in hot or cold beverages, and you don’t experience any of the problems with oil/water separation.”

Jars of Maple Plus come with a small plastic spoon, allowing users to standardize doses at 10mg a scoop. “We also like the flexibility of usage,” says Mercury, “because people can put it in whatever food product they’re consuming or making: coffee, smoothies, cookies, baking, oatmeal. It’s a flexible product that can be added to anything and the dosage is easy to control.” In the interest of transparency, each batch of infused sugar is lab-tested to ensure the quality and consistency of their CBD. Customers can use the batch number stamped on the box to look up test results on the Maple Plus website.

Once Vermont develops a legal cannabis market, Mercury also plans on producing a version of the sugar with THC, and a sugar containing a 1:1 ratio of THC to CBD – with all the ingredients sourced in Vermont.

While it’s taken him a couple very expensive years to get Maple Plus off the ground, he’s not looking for outside investment. “I don’t want to give up any parts of the company,” says Mercury. “If I do give anything up,” he adds, “I want to give it to the employees and make them associates rather than employees.”

Looking to the future of cannabis in Vermont, Mercury hopes to see small businesses favored in any upcoming legislation…

Ensuring that his business does right by the people it serves is a significant operating principle for Mercury. “What I was thinking about when I chose maple as the medium was that it’d promote VT forest-farmers, and help the local economy. Of course,” he says, “this is going to support Vermont’s cannabis farmers as well.”

When asked how non-Vermonters respond to his quintessentially Vermonty product, Mercury says he gets a wide variety of responses. Some people love Vermont and maple syrup “and they think it’s the best thing I could ever have thought of.” Other people, he says, “don’t understand that you can make sugar out of maple syrup.” Looking to the future of cannabis in Vermont, Mercury hopes to see small businesses favored in any upcoming legislation, and that national corporations will be prevented from moving in and taking over the Vermont cannabis market “just because it’s the easiest thing politically.”

While Mercury isn’t interested in being on political front lines, he says, “that doesn’t mean it won’t happen.” Pausing to contemplate, he says, “I don’t see myself as that kind of person. I want to be one small link of the cannabis chain. But a strong, important link in that chain.”

Heady Vermont members can get a 10% discount on Maple Plus at any retail location! Just flash your shiny black card when you visit:

Check out the Maple Plus website for the latest retailer updates.