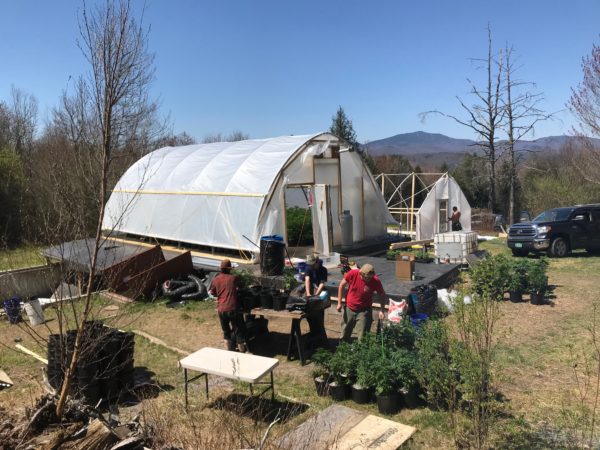 Northern Roots Nursery is a hemp nursery, providing plants to farms of all sizes in

Vermont. Business partners Ryan Podd and Mike Hoffman grow cannabinoid-rich hemp varieties, all of which are high in CBD and  particularly well-suited to the Vermont climate.

Podd and Hoffman are both longtime cannabis enthusiasts who spent years traveling to and working in other states where the legal cannabis market is more established, learning both the plant culture and the business, becoming well-versed in the economics of large-scale commercial propagation, as well as the wisdom of environmentally ethical agricultural practices. Hoffman studied environmental science at Johnson State College and has since pursued a career in the cannabis industry on the West coast, particularly focusing on nursery production. But his goal, like Podd’s was always to come back to Vermont. When the legal hemp market in Vermont finally started getting established, Podd and Hoffman decided to stop traveling for work, and bring their nursery model back home.

“Really,” says Podd, “there are only a few things the plant actually needs. We like to keep it simple.” Podd says that Northern Roots has become something of a grassroots project, comprised of a large network of friends and colleagues all working together to build greenhouses, cultivate Hemp, and build a solid grassroots business.  One of Ryan’s collaborators on a related project, is Maple Plus, a Vermont based company making CBD-infused maple sugar that customers can put into coffee and tea.

Ultimately, the distinguishing strengths of Northern Roots Nursery, says Podd, are their professionalism, years of experience growing at scale, and their capacity to use proven agricultural techniques and practices which are both best for bottom line, and in the best interest of the plant. “Really,” says Podd, “there are only a few things the plant actually needs. We like to keep it simple.” Hoffman and Podd are also collaborating with Willow Crossing Farm in Johnson – where Heady Vermont’s July 1 Legalization Celebration will be taking place – to expand their canopy into a larger greenhouse. During the Celebration, they’ll be running workshops in the greenhouse on propagation and integrated pest management, which Podd describes as “preventative rather than reactive.” He says “it’s about building beneficial microbes in the soil and on the plants so your risk of even having a problem to deal with is very low.”

Hoffman adds that their ultimate goal is both “to provide this alternative natural supplement/herbal remedy to folks that really need it” as well as “make a positive impact on the local farmers who could grow this commodity to benefit their lives and Vermont’s working landscape.”

Looking ahead to the future of Vermont’s legal market, Hoffman says, “As this crop becomes industrialized, we want to make sure we’re able to adapt to the emerging and ever-evolving market conditions of the cannabis/hemp industry – both across the US and in Vermont.”