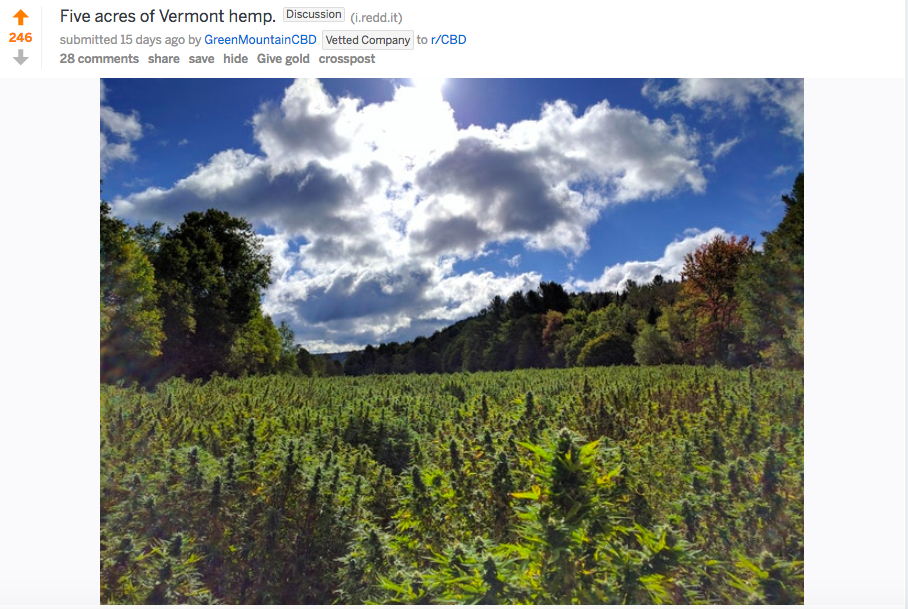 Based in Hardwick, Green Mountain CBD, is Vermont’s largest producer of CBD oil and one of the fastest growing operations in the country. The company, founded in 2016, is also a national player and price leader, currently offering a price point of $.05 per mg of CBD — presently available in 20mg coconut oil capsules, an edible salve, and an MCT oil tincture.

On Thursday, the company announced from its verified reddit account that as they ramp up production and continue expanding their facilities, they predict they will cut that price in half in less than 5 years.

“As we scale production of our CBD oil, our process becomes even more efficient than it is today. Our team is fully committed to passing the savings from increased efficiency on to our customers. We have a clear path to lowering our prices by 50% or more over the coming years and are working every day to make this happen.

We farm and manufacture the highest quality CBD products efficiently and we pass the savings on to the people.”

Green Mountain CBD is inarguably Vermont’s largest producer of CBD oil, farming and extracting high CBD hemp on over five acres in Hardwick and Hyde Park after Vermont Public Radio (VPR) reported they tripled their operation in 2017 and expected a revenue of roughly $2 million last year.

Read: “Editorial: Hemp and CBD Products Are Blowing Up But You’re Not Too Late To Get in The Game”, July 2017

As large a presence as Green Mountain CBD has in the rural Northeast Kingdom region of Vermont — and in inspiring the rapidly-increasing number of Vermont CBD farmers and producers —  the company’s price point, marketing, and first-mover advantage, and use of online sales have made the Vermont operation a player on the national CBD scene.

Part of the marketing strategy effectively utilized by Green Mountain CBD is the use of Instagram, Facebook, and most interestingly, Reddit. Especially through reddit, the company uses a personal voice to create a very active dialogue with customers and fellow CBD producers. The post on Thursday announcing the prediction in price drop was made on /r/cbd, a large “subreddit” online community with over 27,000 active readers, where the company has a verified status as a “Vetted Company.”

Especially on reddit, the company markets itself by sharing appealing images from its Vermont fields and plugging their products in responses to other user questions and complaints. In addition to engagement, the company also uses reddit to post news about national hemp policy updates, including the recent news that the 2018 federal spending bill will maintain the status quo protection of state-legal hemp operators from federally-funded enforcement.

On the same /r/cbd online community, Green Mountain CBD also recently posted seemingly-huge news that their hemp will soon be officially certified organic by NOFA-VT. Stay tuned for an upcoming feature in which Heady Vermont will clarify and outline the present details related to organic certification for cannabis in Vermont. When reached for follow up comment about the expansion and bold price prediction, Green Mountain CBD President Jacob Goldstein confirmed the post and responded via email saying,

“Glad that you picked up on that post which represents the mission and vision of our company. We farm and manufacture the highest quality CBD products efficiently, passing the savings on to the people.”

Editor’s Post- Script: Mostly thanks to a 2016 article published by Vermont Public Radio (VPR) titled, “Vermont Group Makes $250,000 Investment in Hardwick-Grown Hemp” there is a widely-held belief by many in Vermont that Green Mountain CBD received funding from Evergreen Capital Management, which is a Vermont-based venture capital group that includes Will Raap, the founder of the Gardener’s Supply Company and the Intervale Center and Alan Newman, who started Seventh Generation and Magic Hat Brewing.

Despite the title of that article, the $250,000 sum that Evergreen Capital Management offered to Green Mountain CBD was a tentative offer, not a final agreement. Green Mountain CBD ultimately declined that offer and remain privately financed and owned.

Trailblazers: Red Clover Analytics Prides Itself on ‘A Better Standard’ of Testing

Yearim Plantillas of Red Clover Analytics talks about cannabis analytics and the importance of high ...