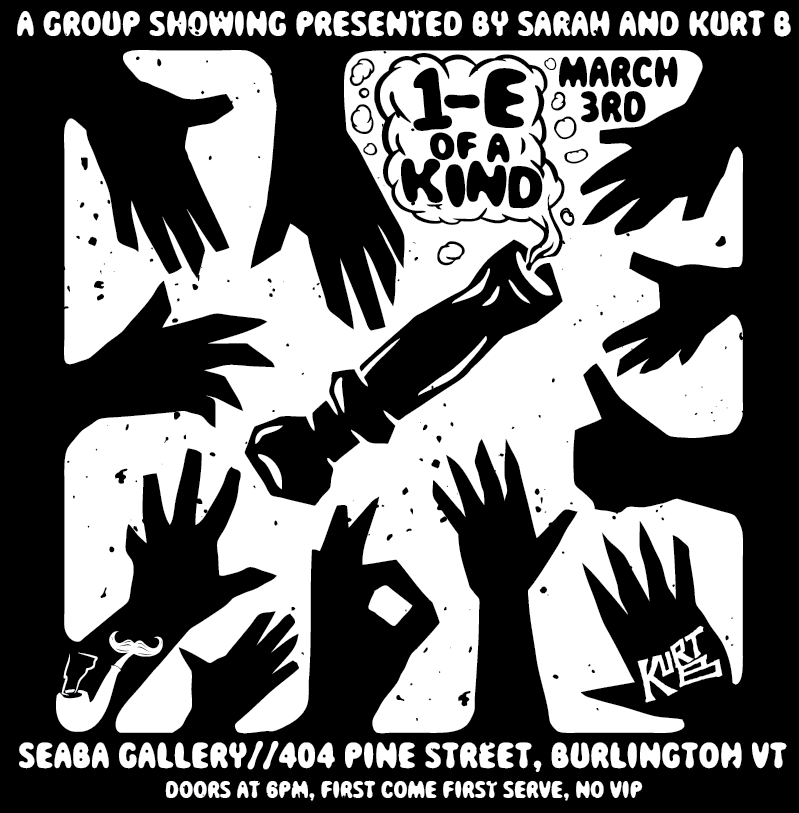 Glass artist Kurt B, of Stash n’ Stowe, is bringing the heat to Burlington for “1-E of a Kind,” an exhibit that will feature works by renowned pipe-makers.

The event is March 3 at the South End Business Association (SEABA) Gallery, 404 Pine Street in Burlington. Doors open at 6 p.m.

Exhibitors are presenting unique one-hitters, chillums or bats, a small straight-shooter style of glass pipe, that are “1-E of a Kind.” It’s form that has fallen to the wayside when it comes to pipe making, according to Kurt B.

“I wanted to bring it into the spotlight,” he said.

The lineup for the event is impressive. More than 50 submissions for the show are arriving in Burlington this week from the prominent artists and hometown favorites such as Kurt B, Peter Muller, Hickory, Tito Bern and Dr. Whitestone.

Traditionally, the majority of pipe makers identify themselves by their creative and dynamic “handles” rather than by their full names, especially in print.

For many or most, that choice is an artistic preference; however, for others, staying semi-anonymous has been a protective measure to avoid potential harassment by law enforcement. By using a federal definition of pipes as “drug paraphernalia,” there is still a potential for law enforcement to interfere with the sale of glass art and pipes.

While the creative names are a shield for some — especially artists in much less cannabis-friendly locales — for Kurt B., the choice was a simple one of convenience as he has a complicated last name.

Thanks to events like the 1-E show and the quality of glass work being produced and viewed by larger audiences, glass art is continuing to reach new and different demographics and becoming more widely recognized and appreciated in conventional art circles.

In that way, the 1-E event is a way to bridge the gap and provide glass artists with an outlet to reach new audiences in a gallery setting with a simple proposition: beauty in simplicity.

“The 1-E breaks it down to its simplest form, a blank slate to show your creativity,” Dr. Whitestone said.

Participants have put their hearts into expressing their unique styles in the 1-E format. Tammy Baller who is submitting three pieces to the show said Kurt B has high standards, and she’s excited to see how other artists tackle the form.

The show will include artists who sell works for as much as $40,000. 1-E of a Kind will offer the community a rare opportunity to own a smaller, more affordable treasure from such artists.

Creating a space to bring the glass community together in Burlington, and showcase what he and other glass artists do is important, Kurt B said.

“On a personal level I’m excited to see the artwork displayed all together and taking a step back to look at how everything is presented,” he said.

“1-E of a Kind is the first time Burlington has had a glass pipe exhibition hosted in a traditional, mainstream gallery setting,” said collector Bobby Berg.

For many years Burlington was a Mecca for glass pipes, and Vermont has been a home to many top-tier glass artists such as Jason Lee, Ease and Kurt B, whose work is known for being innovative, creative, well executed and highly collectable, Berg said.

Enthusiasts from all over the East Coast and beyond will be in Burlington Saturday to experience the rich history and culture of pipe making. Berg remembers some of his favorite pipe-makers blowing glass on Church Street for Full Tank and the Bern Gallery’s Pipe Classic, the first pipe making competition in the country.

That event is held annually and began in 2006.1-E of a Kind will be an event unlike anything the community has ever seen, Berg said.

“It’s events like this that bridge the gap between the established pipe community and the rest of the art world. They are important because they help to legitimize the art form and contribute to shedding preconceived notions and stigmas about cannabis and its users,” Berg said.

“We have more local glassblowers than ever and it’s good to see them have their work displayed with other top tier artists including some former Vermont residents,” Berg said, “It’s cool to see a renaissance.”

Editors Note: This article has been updated under a new byline.