For fear of feds, cannabis prohibition to continue on campus 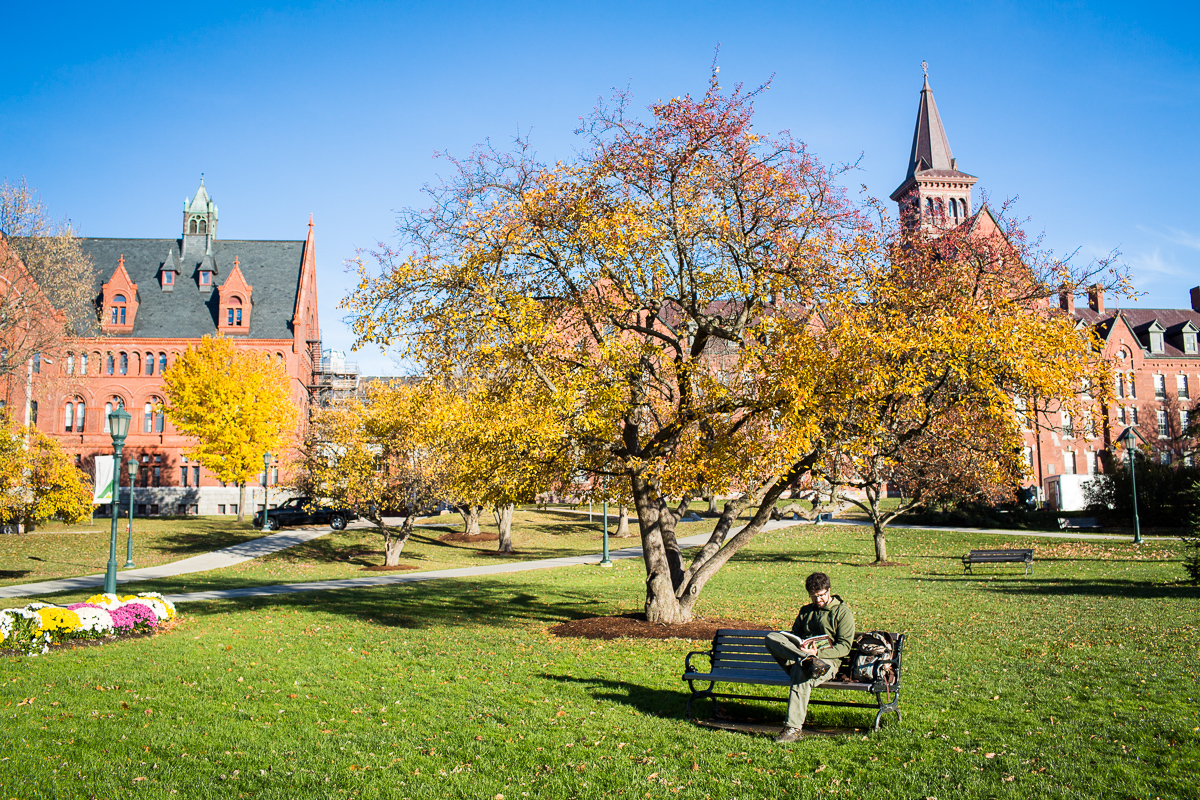 A student studies on the University of Vermont lawn on a late fall day Monday, November 4, 2016. by Monica Donovan

Vermont colleges and universities will not allow cannabis on campus, despite Vermont’s recently passed law allowing recreational use by people older than 21 starting in July.

It’s a move that officials say is necessary to safeguard federal funding, as cannabis remains illegal under federal law, and while students say they aren’t surprised, several said they are disappointed that prohibition will remain the status quo.

“Despite the change in Vermont’s state law, federal law continues to prohibit marijuana use, possession, and cultivation at educational institutions and on the premises of all recipients of federal funds,” wrote Jeb Spaulding, chancellor of the Vermont State Colleges System in a Jan. 19 email to VSCS member institutions.

Spaulding said that accepting federal money means colleges must certify that they comply with the Drug-Free Schools and Communities Act, which means they are required to implement programs to prevent the possession, use and distribution of illegal drugs or alcohol by students and employees.

Other Vermont colleges and universities are taking a similar stand, as have institutions of higher education in other states where cannabis is legal.

In a Jan. 22 email sent to University of Vermont faculty, staff and students, Wendy Koenig, director of federal and state relations, said that the new law “does not change UVM’s policies prohibiting cannabis on campus.” Koenig indicated the university could lose federal dollars, “including Title IV financial aid funds for students” if cannabis were permitted on campus.

With higher education doubling down on prohibition, several UVM students said earlier this week that they don’t think much is going to change when it comes to cannabis on campus.

Jude Dickerson, 21, a UVM junior from Maryland, said that the lack of change is “totally expected.”

Michael Chea, 20, a UVM sophomore from New York, called the college’s decision to maintain its on-campus prohibition “kind of stupid” because “everybody on campus will still be smoking.”

Sean Muniz, 32, a UVM senior based in Vermont, called the campus-wide ban “unfortunate” for campus-dwelling adults legally allowed to possess cannabis under the new law, but he said he understood the decision.

“It’s a non-smoking campus so that negates any kind of smoking, marijuana or not,” he said. “Secondly, they are partially federally-funded so they have to play a balancing act to keep the feds off their back.”

Loren Fillmore, 21, a UVM senior from Connecticut and an intern with Heady Vermont, said she’s concerned that, with legalization, more university law enforcement bandwidth may go toward cannabis enforcement.

As a former Resident Life Advisor, Fillmore said she learned that there are roughly two-and-a-half sexual assault notifications sent to the UVM community weekly. At the same time, she said RAs are asked to report cannabis use to campus police.

“So we’re averaging two-and-a-half sexual assaults a week, and you want me to take the cops away from whatever they are doing to come and yell at this person who is probably eating Doritos in their bed?” she asked, “I’m sorry, it’s absurd.”

At Middlebury College, Hannah Ross, a school attorney, offered a similar warning in a Jan. 22 email the school community, stating that smoking cannabis on campus would violate the school’s no smoking policy.

Ross added that school officials are “cognizant” of research conducted at UVM that “indicates that even recreational use of cannabis has significant negative impacts on knowledge retention and brain development of individuals under the age of 29.”

“All of these factors support our policy of prohibiting cannabis use and possession on our campus,” Ross said in the email, adding that the college isn’t willing to risk “significant federal dollars,” including financial aid,“nor the health and welfare of its students by permitting cannabis on campus.”

Vermont’s military college, Norwich University, took a hardline stance against cannabis use for its students and staff.

“Norwich University condemns the use of illegal drugs, the misuse of legal drugs and dietary supplements, and the use of performance-enhancing substances,” said Daphne Larkin, director of media relations and community affairs, in an email. “The possession, use, or consumption of any controlled or illegal substances not prescribed by a physician is prohibited both on and off campus.”

Champlain College did not respond to a request for comment, and according to four members of the faculty and student body, the college did not send out a statement on its cannabis policy in light of legalization. In Champlain’s official 2016-2017 college policies, cannabis is included on the list of banned substances.

Most colleges and universities in states with recreational cannabis laws don’t allow adults to use or possess cannabis on campus. In November 2016, following the passage of Prop. 64 in California, University of California officials released a statement outlining that there would be no changes to their cannabis policies.