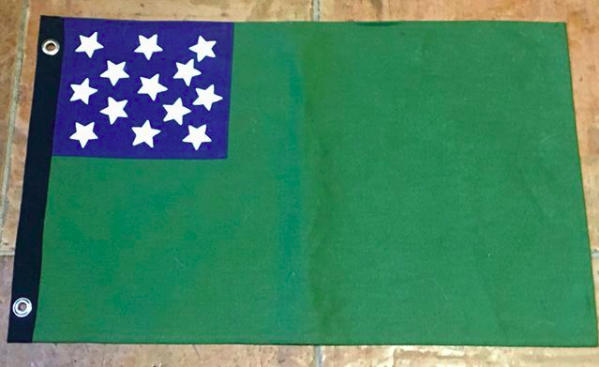 The Second Vermont Republic official flag received a bit of a revamp earlier this month.

While the design is set to remain the same – it is, after all, the  design used by Ethan Allen and the Green Mountain Boys – new flags will be hand-painted and made with 100 percent hemp fabric.

“We chose hemp primarily because it represents resilience,” says Dr. Rob Williams,  publisher of the Vermont Independent and head of the Second Vermont Republic, or 2VR.

Similar to how Vermonters make the best of each cold, harsh winter, the hemp plant is known for standing its ground in tough conditions. 2VR wanted to craft a flag that represented the state, and the official slogan of the Independent is “Resistance and Resilience,” both traits that would be crucial in implementing “Plan-V,” 2VR’s comprehensive outline for Vermont’s transition to an independent republic.

The idea of an independent Vermont has grown in popularity in the current political climate, something Williams refers to as the “Trump Bump.”

However, 2VR predates the current administration, having been founded in 2004. According to the Independent, their vision is to restore Vermont’s status as an independent republic, as it was from 1777 to 1791, hence the second in Second Vermont Republic. Williams said that before Vermont became the 14th state, it was a self-constituted republic, something that sets it apart from other formerly independent states like Texas and California.

While hemp represents resilience, it also represents 2VR’s commitment to economic relocalization, and the pursuit of an “agripreneurial destiny.” 2VR is about more than seceding from Trump’s America. It’s about protecting Vermont’s unique emphasis on public good and local business from what the Independent calls the “United States of Empire,” or our nation’s corrupt history of exploitation and imperialist activities.

That history inspired the 2VR movement to call for relocalization of Vermont’s economy – something mirrored by hemp’s rising popularity and growth in the state.

Williams worked with Kelly McDowell to develop 2VR’s new flags. McDowell holds a master’s in social innovation and sustainability from Goddard College, with a focus on sustainable fibers and textiles. Naturally, she’s an expert on the benefits of hemp fabric.

After being introduced to Williams through a mutual acquaintance, McDowell agreed to help out with 2VR’s flag design. Her vision? Keep production as local as possible.

“I said, ‘Let’s see how much of this we can do in our little state,’” Kelly recalls, and that’s what they did. The team’s process outsourced as little material as possible and keeps labor close to home. McDowell hand-paints the stars on each 2VR flag with U.S.-made paint.

McDowell said our country has roots in hemp. The first American flag, sewn by Betsy Ross, was made from hemp fabric, as was the first draft of the Declaration of Independence. Somewhere along the line, however, production of national flair got a lot less sustainable. Today, standard flags are typically constructed from synthetic petroleum byproducts that don’t biodegrade.

Hemp, on the other hand, is biodegradable and has major advantages over other popular fabrics like cotton. The hemp plant has a long tap root, which means its cultivation doesn’t lead to erosion. Plus, hemp uses far less water than cotton and doesn’t require any treatment by chemical pesticides.

The plant is becoming more accessible in Vermont, thanks to its legalization in 2013, making it a huge asset to local businesses.

After spending time in the fashion industry, McDowell saw the harsh impact of mainstream production practices firsthand. She’s a firm believer that turning to more sustainable materials, like hemp, can change the world – and who better to lead an ethical turnaround than the progressive state of Vermont?

McDowell hopes that her work will help bring awareness to the power of this amazing plant.

Hemp has a bad rap, because mainstream discussions have dismissed it as the scandalous cousin of the marijuana plant, largely ignoring its value as an industrial material. By giving new meaning to this underappreciated plant, McDowell and organizations like 2VR are helping to decrease the stigma surrounding hemp.

Hemp is also making its way into Vermont’s economy in a big way, creating a new market for local farmers. Sustainability, resilience, local growth and hope for the future – hemp embodies pretty much everything Vermonters love about their state, and 2VR couldn’t have picked a better material to represent their cause.