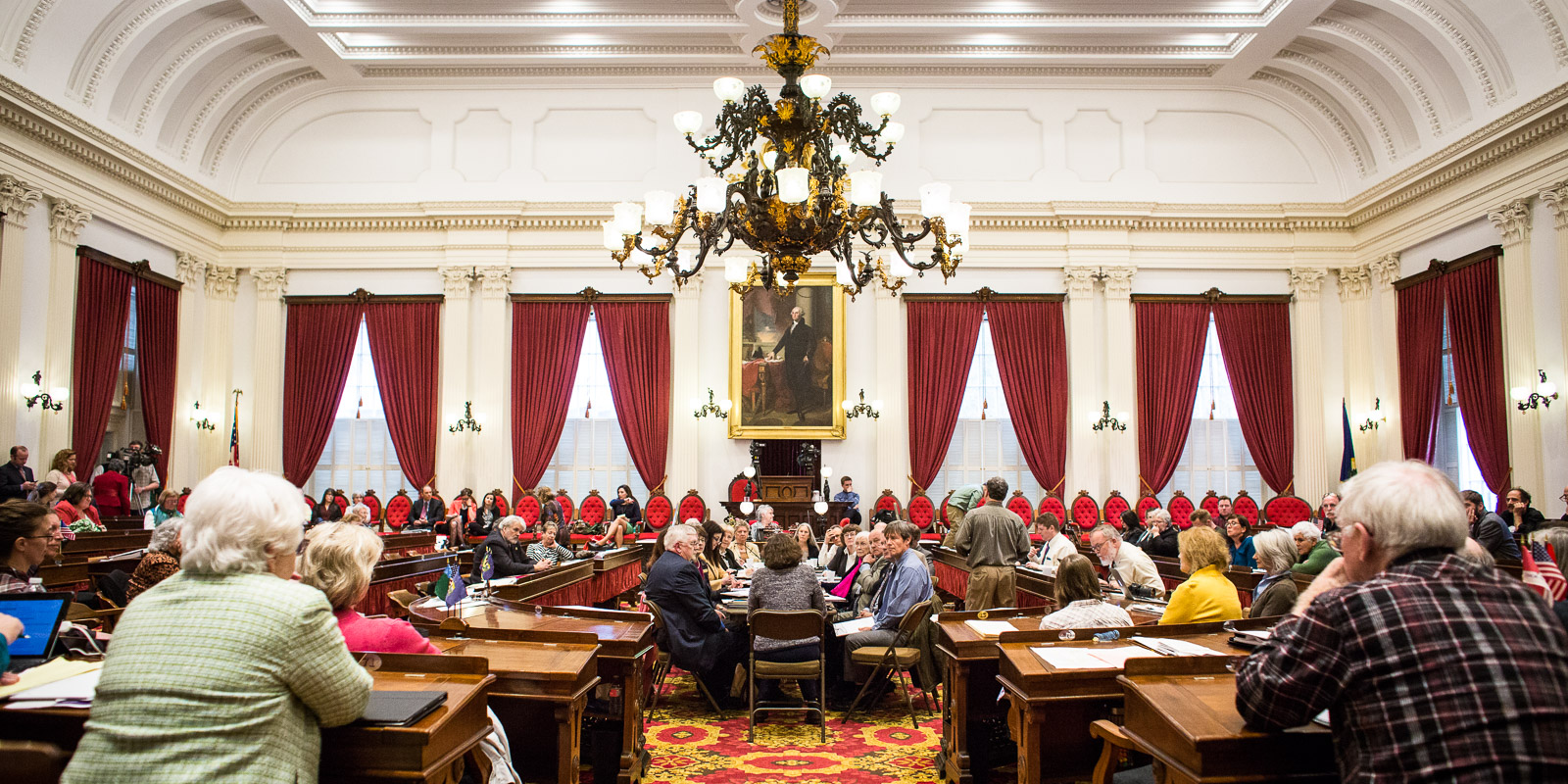 No, Gov. Phil Scott hasn’t signed the legalization bill that is sitting on his desk for the second day now.

There is no doubt that Scott will sign the bill, as he’s publicly confirmed his intent enough times that to go back on his word would be political Hari Kari.

As the anticipation has intensified, so have Scott’s descriptions of his libertarian streak. Most recently, he told Seven Days political columnist John Walters that not only is he not philosophically opposed to legalization, he believes “what you do in your own home should be your business, as long as it doesn’t affect someone else.”

In direct contrast to Scott’s libertarian stance, is that of another prominent central Vermont Republican: Barre Mayor Thom Lauzon. Lauzon wants Barre residents to register with a public database and pay a registration fee to grow their cannabis plants in their homes for personal use.

The Barre-Montpelier Times Argus reported Thursday during a recent city council meeting, Mayor Lauzon floated the idea that, to protect the public from the dreaded Devil’s Lettuce, Barre police and housing inspection authorities should have a (public) list of homegrowers. H/T Heady Vermont Reader Glenn for sharing the link on our facebook page.

From the Times Argus:

Lauzon said he planned to propose a license requirement that would include a fee and create a list of license holders that would be public, but the city wouldn’t go out of its way to publish.

“We need to know,” he said. “Honestly the folks who inspect our housing do need to know. It’s an important piece of information. … We want to make sure they’re playing by the rules.”

Upon reading this, I reached out to Jay Diaz, a staff attorney with the American Civil Liberties Union of Vermont to ask if municipalities can supersede state laws, and if H.511 includes any municipal authority to prevent private citizens from growing within the state law.

Without being able to do legal research today, I feel safe is saying that all Vermont municipalities need clear and unequivocal statutory permission from the state to take an action not within the municipality’s authority. Thus, Mayor Lauzon needs to point to Barre’s authority, granted expressly by the Vermont Legislature, to create such registration requirements. If he cannot do so, any such requirement would be unlawful.

As far as I can tell from H. 511, the only authority it gives to municipality’s around marijuana relates to adopting a civil ordinance to provide additional penalties for consumption of marijuana in a public place.

I wonder how Mayor Lauzon would feel about requiring Barre residents to register their firearms. What is it that they say? After all, turnabout is fair play.

According to the TA, Mayor Lauzon doesn’t have a philosophical issue with legalizing marijuana. Rather, he doesn’t think the bill goes far enough, calling for a taxed and regulated system:

“If they had the resolve to legalize marijuana they should have gone to a full ‘tax and regulate’ system,” he said. “This is just going to create a mess.”

With all due respect to Mayor Lauzon: Bullshit.

Although his district includes Milton, the site of the state’s largest medical marijuana cultivation facility (which doesn’t collect any taxes on it’s regulated marijuana sales, btw), Turner has never shown any support for taxing and regulating cannabis.

In fact, less than a year ago, Turner told Vermont Public Radio’s Bob Kinzel plainly that “he would oppose the legalization of marijuana in any form this session.”

When another legalization bill, H.170, finally came to the floor for a vote, several amendments were suggested, including one by Rep. Jean O’Sullivan (D-Burlington) that would have scraped mere legalization in favor of a fully taxed and regulated system.

Turner was one of 99 representatives who voted against O’Sullivan’s amendment.

After a few days in the statehouse last week, I was reminded of how much more shrewd and tactically superior the Vermont Republicans are as a party when it comes to using the press and parliamentary rules — like Rep. Turner’s disingenuous tax and regulate amendment — to demonstrate philosophical opposition.

Neither Mayor Lauzon nor Rep. Turner will be running for their same positions next year, so they won’t suffer any political consequence for their political trolling.

But hey, even after losing the public debate, these opponents still got an hour of my time and some earned media in the Times Argus, so tip of the cap I guess.

HOPE FOR THE VTGOP

Unlike the aforementioned lame ducks, I can confirm that there are indeed reasonable and responsible voices in the Vermont GOP.

I’ll personally vouch for Rep. Jansen Wilhoit (R-St. Johnsbury) who sincerely prefers tax and regulate to legalization. Wilhoit has made that clear at every step in the process, and has actually taken the time, and listened to the testimony, to understand the policy details, while also not standing in the way of the crucial first step of legalization.

If you’d like to hear what a real libertarian (and the classic version of a ‘Vermont Republican’) sounds like, check out the comments from Sen. Joe Benning (R-Caledonia/Essex) at last week’s Statehouse press conference.

During his remarks, Sen. Benning said cannabis tax dollars would benefit youth education, prevention, and law enforcement, but also noted the importance of civil liberties and setting the right priorities for drug enforcement in Vermont.

“We, as a society, need to start changing our attitude if we are going to have any hope at all of, number one, living up to our own Vermont Constitution — which is very libertarian in nature — and number two, taking care of the real problem that is in front of you — which is the opioid situation.”

Rep. Tom Burditt (R-West Rutland) is another Vermont Republican who has a visible libertarian streak and has walked the walk on his commitment to individual rights when it comes to legalization – even when that meant standing up to fellow Republicans.

Let’s not forget Rep. Heidi Scheuermann (R-Stowe). Though she didn’t vote for either H.170 last year, or H.511 this year, she did cast significant votes against multiple “poison pill” amendments proposed and debated on the floor in 2017 and 2018 — and she’s from a relatively conservative district.

Rep. Scheuermann has also voiced, what I believe to be, sincere support for both medical marijuana and establishing an effective taxed and regulated system.

Scheuermann previously worked for U.S. Sen. James Jeffords, who so embodied the classic “Vermont Republican” ideal of pragmatism (including social liberties), that he left the national GOP when he felt it slipping beneath his feet under President George H.W. Bush.

Memo to whomever takes over the Vermont GOP: stand for civil liberties and practical economic policy (including waking up the sleeping giant that is the nine-figure underground cannabis economy) and bring back the classic, pragmatic Vermont Republican. It might improve your odds in this overwhelmingly blue state…

One reason that Scott isn’t going host a public bill signing for H.511 is that at least one significant part of his base are fuming mad: Vermont’s Law Enforcement community.

. #VT @GovPhilScott says he “will sign” H. 511, the limited #marijuana legalization bill, between now and Monday’s deadline, but will do so in private. Scott said he “isn’t shying away” from the controversy but decided a public ceremony was inappropriate. #vtpoli pic.twitter.com/Bclr1UWEfH

“Vermont legislators have not listened to us. It’s not just what law enforcement has presented in the argument. Experts on mental health, education and other citizens have testified with their concerns about the legalization of marijuana. They’ve heard all the terrible stories, independent reports, developmental risks and other warnings. They’ve all been paraded in front of the legislature. But it’s a matter of what they want to hear. …I don’t know why we even testified. They didn’t even listen to us. When we see something as dangerous as this, which presents a risk, we have an obligation to tell the people what they need to hear, not what they want to hear. It’s obvious they did not want to hear what we had to say. …Once you open Pandora’s box, you can’t shut it.”

This is mostly political theater for dramatic effect, but it is notable that in 2016, another conservative blog, Watchdog.org reported quotes from Chief Merkel indicating Scott’s opposition to marijuana legalization was the exact reason why they were supporting him:

Police largely were ignored during the Legislature’s quest to commercialize pot, but on Monday the Vermont Police Association got out its megaphone and loudly endorsed Phil Scott, citing marijuana as the main reason.

“Most important is the legalization of marijuana. (Scott’s) not rushing into anything, he’s waiting to see how the laws impact other states,” George Merkel, president of the Vermont Police Association, told Watchdog.

In 2017, the police pressure from his bae base was enough to convince Scott to veto a legalization bill. Now, in an election year, and after thousands of phone calls and a full summer of feedback, the voice of the public has apparently tipped the scales.

As to the notion that the police haven’t been heard on this issue, I’ll stop laughing long enough to (respectfully) call bullshit.

In 2016, the police were so present in Montpelier, that lawmakers were publicly questioning the role and presence of uniformed, armed police in the statehouse in a Burlington Free Press story.

A week later, that same paper also published an Editorial in May 2016 stating that, “Police shouldn’t lobby in uniform”

In that editorial, Aki Soga, the Free Press’ Editor of Reader Engagement, wrote at length about what the police uniform represents, and the balance that needs be struck for a healthy public discourse:

Every officer has a right to petition lawmakers as a private citizen, but wearing the uniform in such cases would be out of place. Acting as a private citizen includes appearing on behalf of labor unions and professional associations — especially when such groups also have paid lobbyists working the House and Senate chambers. This figure doesn’t indicate how much they spent specifically lobbying against legalization. However, it also doesn’t count lobbying expenditures by the Vermont League of Cities and Towns, which represents municipal police departments (and much more) and who have staunchly and effectively opposed legalization.

If Vermont’s law enforcement community feel that after spending $46,000 in the last year, their voices are not being heard, we welcome letters to the editor at [email protected] and our sales guy Colin can put together a hell of an advertising package for $46,000.

Correction: A previous version of this story incorrectly stated that Rep. Heidi Scheuermann (R-Stowe) voted in favor of H.511. She did not. We regret the error.