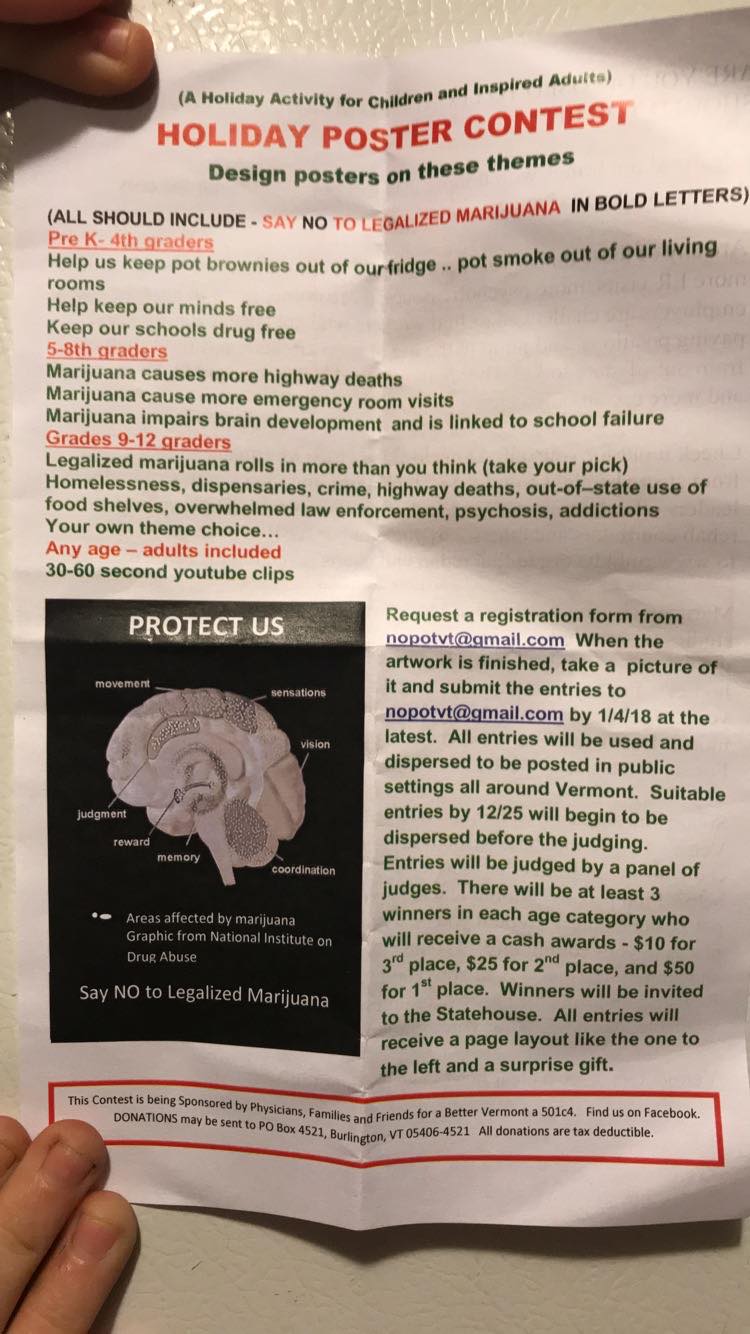 SOUTH ROYALTON, Vt. — A Vermont parent says that on the last day of school before winter break, a substitute teacher approached her 11-year-old daughter in a South Royalton Elementary School hallway, and gave the girl a flier encouraging her to participate in a holiday poster contest sponsored by the anti-marijuana advocacy group Physicians, Families, and Friends for a Better Vermont.

First announced in an opinion piece published in the Burlington Free Press, the contest offers cash prizes to elementary students as young as kindergarten to create “SAY NO TO LEGALIZED MARIJUANA” posters. The flier encourages students and adults of any age to send video clips to nopotvt@gmail.com, and suggests specific themes and talking points for elementary, middle, and high school students:

The contest offers cash prizes for each different age group, a $10 prize for third place, $25 for second place, and $50 for the first place. The winners from each age group would also receive a trip to the Vermont State House.

According to the flier, which Heady Vermont obtained from the South Royalton parent, Physicians, Families, and Friends For a Better Vermont is a 501c4 nonprofit organization, whose recent press conference in Montpelier made national news via the Associated Press.

Christine Hudson, chair of South Royalton School Board said she was unaware of this specific incident and that her district was not contacted by the advocacy group, nor did it grant permission to the group to directly solicit students or pass out political advocacy materials on school property.

South Royalton is presently searching for a new full-time principal, but confirmed that the acting principal had not been contacted by the advocacy group about distributing the fliers beforehand, was not aware of the incident, and had not given permission to distribute the poster materials in the school.

Hudson said that as a mother to five daughters whose ages range from six to 21, she doesn’t support politics being brought into the schools so directly by outside groups seeking to use students to advance their own position — regardless of whether it’s about marijuana or any other local or statewide political issue.

However, for the parent, who has asked to remain unnamed, and who shared the poster contest with both Heady Vermont and on the WCAX facebook page in response to a recent WCAX news story about the anti-marijuana group, the specific issue of substance abuse triggered a negative reaction for her and her family. “It’s one thing if it’s a drugs are bad kind of thing, but none of anything they put on that is actually factual. And given that my daughter is 11 and has already been affected by the drug epidemic, I feel it’s insensitive to distribute this to children outside of the curriculum and without parental consent,” she said.

The parent also said that she didn’t think the talking points provided about marijuana were factual, but that her bigger problem was with the idea that students were being sent home with specific advocacy materials without the consent of parents.

According to the Vermont Secretary of State website, Physicians, Families, and Friends for a Better Vermont is the name of a 501c4 nonprofit organization, as well as a for-profit business, both of which are represented by Paul Frank and Collins, a Vermont-based law firm. At this time, neither the for- or non-profit version of the organization has any documented lobbying disclosures in 2017, or is publicly listed a registered Vermont lobbyist.

Several attempts to reach Physicians, Families, and Friends for a Better Vermont for comment were unsuccessful.