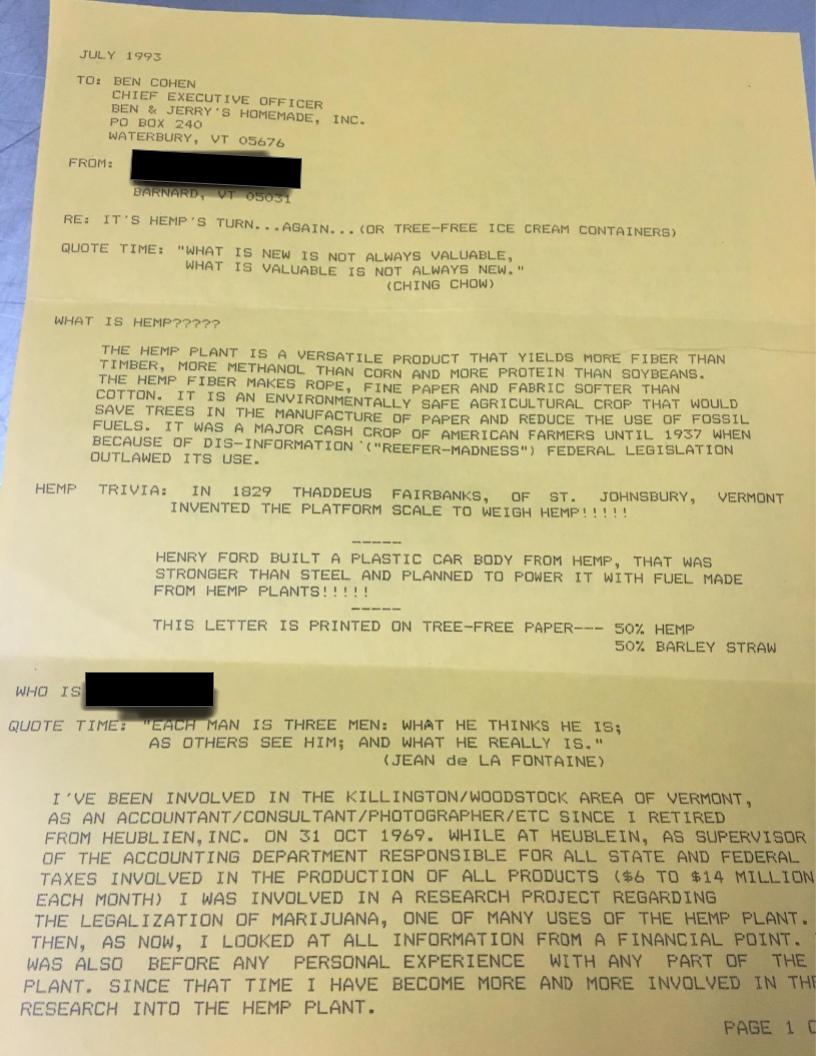 The envelope contained a hand-written note with the following, “Eli, good to see the hemp train is moving forward. Enclosed are a couple of letters from my efforts in early 90’s – thought it would have happened sooner, but it’s happening – thanks for your efforts, may the spirits be with you.”

The first letter was a memo that had been typed (likely on an Apple II computer) and sent to Ben Cohen, CEO of Ben & Jerry’s, then still an independently-owned Vermont business.

In the letter, the author correctly predicted a scenario in which the state’s largest educational institution could use its land grant status to promote hemp cultivation and innovation:

“I see a way that Vermont, using the University of Vermont Agricultural Extension Service, can set in motion the research needed to restore hemp as a major cash crop in Vermont.”

We have omitted the identity of the author for anonymity (and will update if/when we hear back from them), but are more than happy to give this pioneering advocate his/her proper credit for being years ahead of his/her time and a congratulations for sticking around long enough to see common sense become a bit more common, at least in terms of hemp in Vermont.

It’s unknown whether Ben & Jerry’s ever responded to this letter, but 22 years later, in a 2015 interview with Huffington Post, Ben Cohen gave nominal support to legalization when asked about a cannabis-infused Ben & Jerry’s ice cream, saying, “Makes sense to me, combine your pleasures.” We’ll update this story if/when we hear back from Ben & Jerry’s about any response to this letter or other past company support for hemp or cannabis.

The Hemp plant is a versatile product that yields more fiber than timber, more methanol than corn and more protein than soybeans. the hemp fiber makes rope, fine paper and fabric softer than cotton. It is an environmentally safe agricultural crop that would save trees in the manufacture of paper and reduce the use of fossil fuels. It was a major cash crop of American farmers until 1937 when because of dis-information (“Reefer Madness”) federal legislation outlawed its use.

Henry Ford built a plastic car body from hemp that was stronger than steel and planned to power it with fuel made from hemp plants!!!!!

This letter is printed on tree-free paper – 50% hemp, 50% barley straw

“Each man is three men: what he thinks he is; as others see him; and what he really is.” (Jean de La Fontaine)

I’ve been involved in the Killington/Woodstock area of Vermont, as an accountant/consultant/photographer/etc since I retired from [LARGE MANUFACTURING COMPANY] on 31 October, 1969. While at [Lg. Manufacturing Company], as supervisor of the accounting department responsible for all products ($6 – $14 Million each month), I was involved in a research project regarding the legalization of marijuana, one of many uses of the hemp plant. Then, as now, I looked at all information from a financial point. This was also before any personal experience with any part of the hemp plant. Since that time I have become more and more involved in the research into the hemp plant.

I see the hemp plant as a way to revitalize Vermonts agricultural economy, save family farms, and promote new industries. I understand that the state of Vermont had to be in financial crisis before it would even consider doing research into the hemp plant, and have been writing letter, testifying at public hearings and trying to educate those in Montpelier about the financial benefits of the hemp plant.

My research shows that it is not against Vermont law to grow hemp, and I have applied for a permit to grow it. I have heard from the Dept. of Agriculture and next have to deal with the State Board of Health. I have no plans to grow hemp but want to start to set in place the system that will be needed down the road. I see a way that Vermont, using the University of Vermont Agricultural Extension service, can set in motion the research needed to restore hemp as a major cash crop in Vermont. As they say, as Vermont goes, so goes the nation…

This is where Ben & Jerry’s comes in. Reality is that I’ve taken this about as far as I can as an individual. I don’t have the finances or the “clout” to take this to the next level. I’ve enclosed some info about the hemp plant, new developments in worldwide hemp production, my efforts, and me, as well as a 30 minute video about the possibilities of Hemp from 1991. Think about all hte ways Ben & Jerry’s could use different parts of the plant, just starting with tree-free ice cream containers. Economically, all this will only work, at this time, if hte grower is the user. Why can’t that be Ben & Jerry’s????? Working with our sister state in Russia as well as Vermont would be a good starting point! I’ve read your statement of mission and all this seems to fit. Think about next years social assessment.

May the Spirits Be With You,