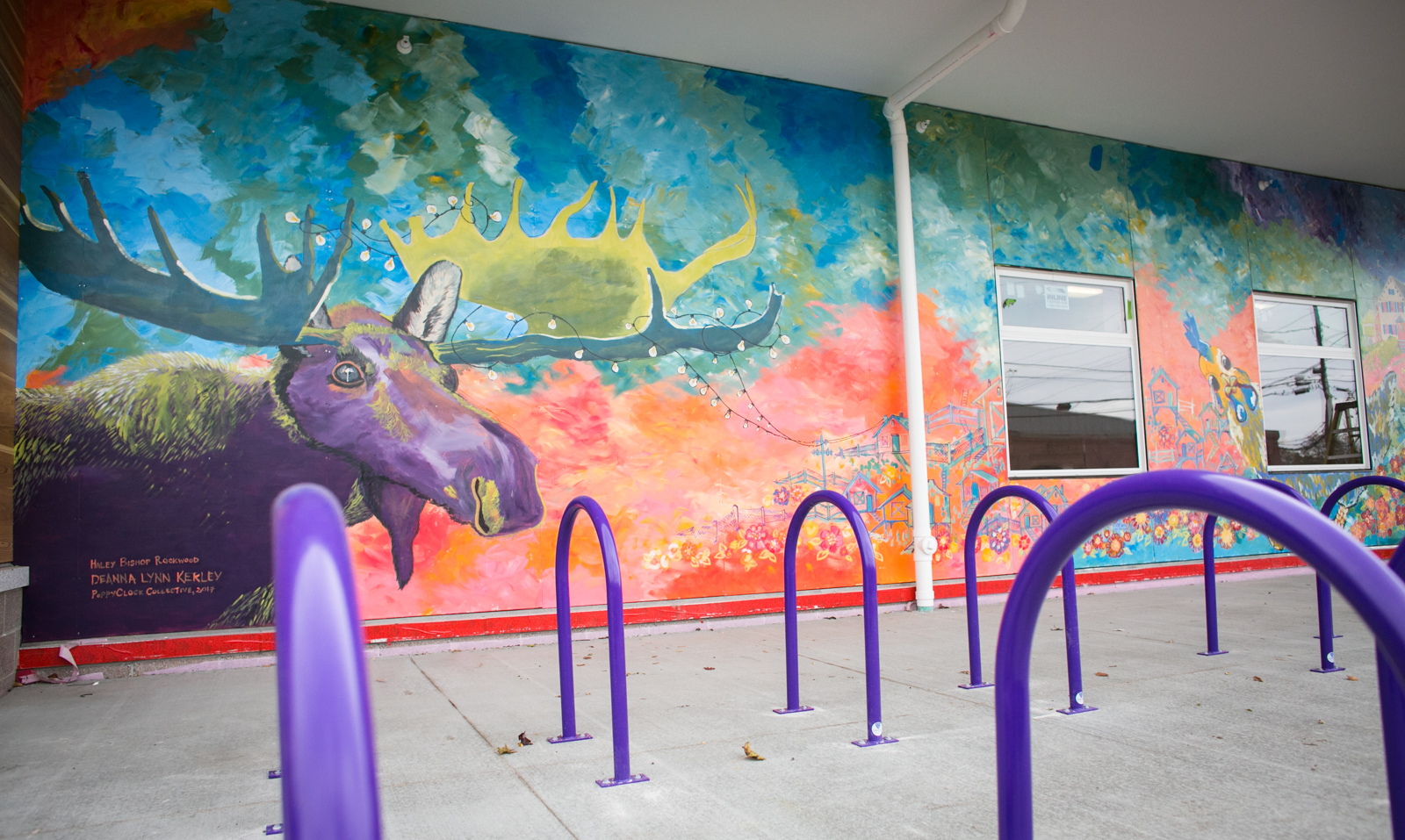 Originally announced back in June of 2015, City Market Onion River Co-op’s second location in Burlington’s South End is finally scheduled to open this November. Heady Vermont interviewed DeAnna Kerley, co-founder of a group of artists known as The Poppyclock Collective, which City Market commissioned to paint a mural for their South End storefront. We met with DeAnna to find out more about the mural and the Collective.

Heady Vermont: So let’s start off with a pretty basic question. How’d you get started as an artist?

DeAnna Kerley: When I was in middle school, I always really liked to draw. I did a lot of art just, like, as a hobby. I applied to an Arts Magnet school, but was rejected. (laughs) And I sort of took that so much to heart that I didn’t pick up any drawing, I didn’t pick up a paintbrush, for years and years and years. I started kind of picking it up again just as a hobby in college. Especially when I moved up [to Burlington], that’s when I really started to get more into the art scene and practicing it more.

I was doing this random 30 day sketch challenge. This was in January of 2016. I was posting it, and at the time, I was sort of acquaintances with my now-art-partner Haley Rockwood. She started seeing those posts, and she was like, “Hey, this is really awesome, we should start doing art together, we should start collaborating!” And I was like, “Yeah, that sounds great!” You know, I was sort of new in town still, wanted to make friends, wanted to make connections. And so we started doing art, you know… probably once every couple of weeks? And it sort of took off into this Poppyclock Collective. So it sort of started very randomly. It was like this very organic thing that just sort of snowballed into this really successful venture that we’re doing.

HVT: How many artists make up The Poppyclock Collective?

DK: It’s kind of flexible. Really, Haley and I are sort of the anchor points of the Collective. We kind of do the logistics, we network with breweries, cafes. Whatever it may be to get our art up, we do the requests or proposals, like for the mural. We, sort of as a practice, and kind of what we believe in, is that art should be community based. So we’ll pull in different artists at different times. Usually, we’ll have one or two Burlington artists featured in our galleries or in our pop-up shows. So It kind of changes. It’s very fluid. Right now, it’s me and Haley, and kind of like, picking and choosing here and there.

HVT: What was the process like for being selected for the mural?

DK: I think I was looking at [City Market’s] Instagram one day and I saw that they had this post and they were looking for artists to complete a mural for their new location. Haley and I were talking about it and we were like, “Oh, god, it’s kind of a long shot. Should we do this? Does it make sense for us?” And we kind of just decided, “Yeah, we need to go for it.” So that was a little over a year ago. It was summer of 2016 that we came across that.

Basically, what the first step was, was submitting your artist’s resume and your art bio. By that time we had a few shows under our belt. Haley had done more, like, outdoor art. After that, they sort of narrowed that group of applicants down to a smaller number and said, “Okay, now we want you to, for real, to do a proposal.” They gave us a small honorarium for doing that, and from there, they narrowed it down a little more and put it down to a community vote. And then from there, (laughs) they looked at all of that data and like, all the voting that came through. Then they said, “Okay, these are our finalists, Poppyclock Collective and Abby Manock, I think her name is. She was the other muralist.

HVT: What was your original inspiration for the mural?

DK: Haley and I were trying to think about, like, what’s best representative of Burlington? And I’d say our styles are more abstract rather than photorealistic. So we brainstormed, sketched on some watercolor paper while we were together, and kind of looked at it all, and we said “Oh yeah, that’s really cool, that really reminds me of Burlington.”

Really, what we were trying to create with the mural is this sense of, like… clutter that Burlington has? You know, houses on top of each other, chicken coops in people’s backyards in the Old North End, chickens running around… like, a moose wandering into the city, which actually happened my first year living here. And then, you know, the lights. I feel like Burlington, from Church Street to Lamp Shop, there’s just stringed lights everywhere. And then just all of these abstract colors, like, kind of representative of the sunsets that happen on the lake and just how vibrant our community really is.

It was very fluid, and even while we were brainstorming, and up until the moment we were painting, it was still sort of this work in progress. We went into the mural, and we were painting it, and you know, there were a lot of people who would come up and say, “Oh, so did you have this all planned out? Is this all on a graph somewhere?” And Haley and I were like, “Fuck no.” We were just sort of winging it, playing it by ear and going with what looks good at the moment.

HVT: You said Haley had some experience doing outdoor art. What about you? How much have you learned from this?

DK: Haley’s been really, really helpful for me. I had this passion to do art, but it’s a totally different level learning how to network and how to meet people. That was really invaluable for me. [Haley] went to school in Boston for art. She was already pretty established in the community here. She had a few shows, she won the Magic Hat Art Hop [Labels for Libations] Contest the first year that they did it. It was a really great learning experience for me.

One of my first big projects that I did with her was the Magic Hat Wall to Canvas in the summer of 2016. I think it was really fun for people to see two artists on the same canvas, like, painting on the same surface. Whereas, you know, live art, you usually just see one artist doing something. I think that’s been really helpful for me, and I think [Haley’s] learned a lot from me as well. I tend to be more business minded. I do advertising strategy for dealerships. I’ve handled a lot of the things like establishing ourselves as an LLC. So I think it’s really been a true collective in the sense that we’ve been learning from each other.

HVT: Do you have a rough date for when the mural might be done?

DK: We’re done with the painting. We’ve ordered all of the sealing materials, so that’s all happening [the weekend of Oct. 28-29]. And… yeah, after that we’ll be done. I think they’re doing the grand opening for the new City Market sometime in mid-November.

HVT: Where can we find The Poppyclock Collective and your art?

DK: We do have a website at thepoppyclockcollective.com. I’ll be honest and say that there’s not a lot of art on the site. That site has mainly our mission and who we are, but our Instagram has a lot of our art on it. Our Facebook has a lot of the art as well.

HVT: We look really forward to seeing the mural once everything’s finished. It was a pleasure to meet you.

DK: You too! Thank you so much!