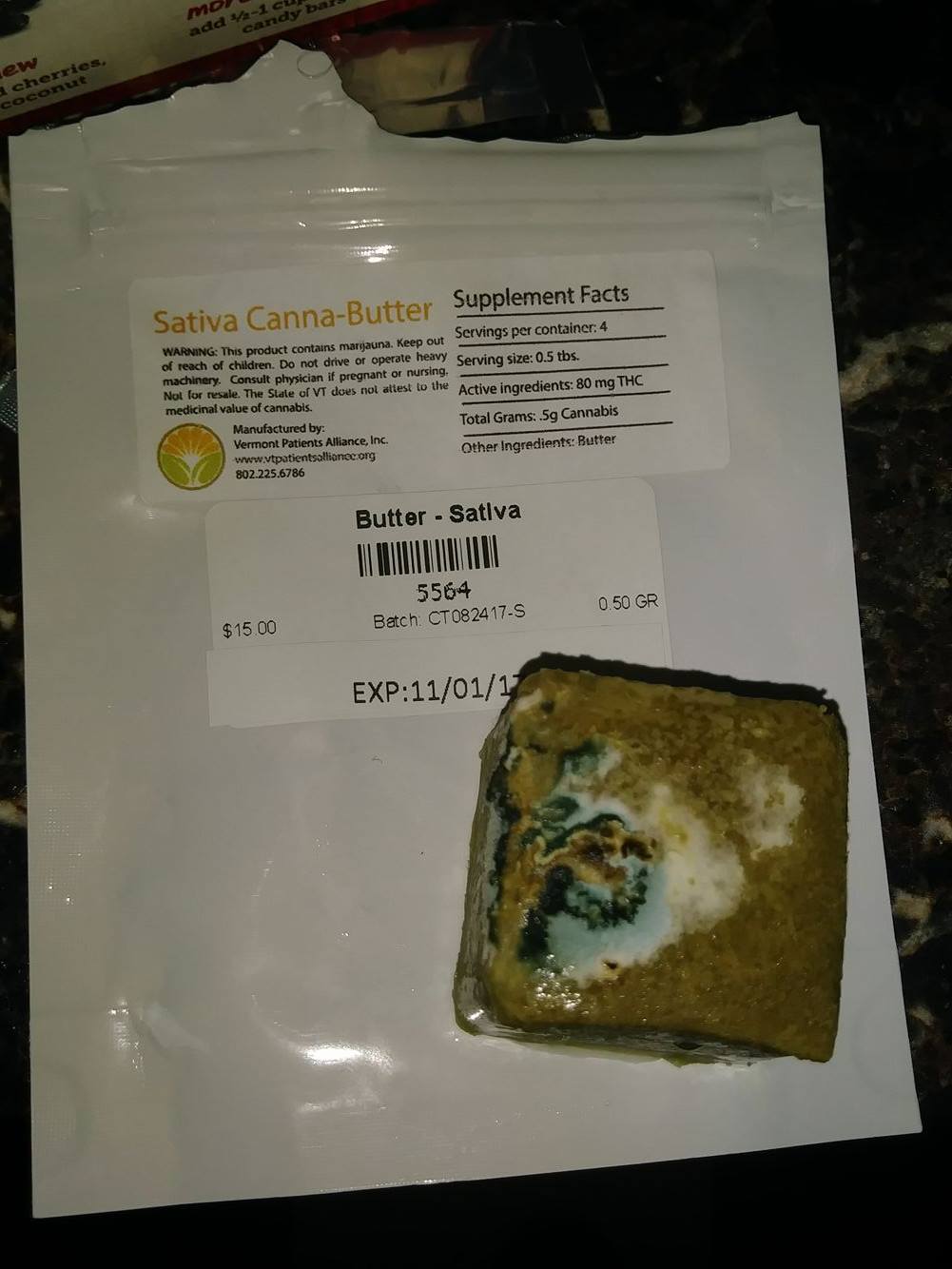 WINOOSKI, Vt. — After a grotesque image of apparently moldy cannabis butter was circulated on Facebook by a registered Vermont patient, the dispensary where it was purchased, the Vermont Patients Alliance (VPA), has issued a product recall for batch #5564 of their “Sativa Canna-Butter.” The recall of the butter is the first in the history of Vermont’s medical marijuana program, and affected two patients who had purchased the butter in the last month.

After being contacted by the patient, the VPA’s tracking software enabled them to identify and notify the two exact individuals who purchased product from the potentially contaminated batch. Until the completion of further testing to ensure there are no issues with packaging, the dispensary will not be offering infused butter.

The image had first been shared in private patient Facebook groups before being shared with Heady Vermont. The image of the butter was also widely circulated by the Facebook page of Vermont Green Grow, a business based in Bennington who are presently suing the state after their dispensary application was disqualified and whose leadership have been vocal critics of the state medical marijuana program, which was recently classified in a Vermont Public Radio news story as an “oligopoly.”

Without the ability to verify the original condition or safe storage of the butter, the image went unreported by Heady Vermont and other news media until Wednesday afternoon, when the patient who purchased the butter shared the email response he had received from the dispensary, the authenticity of which Heady Vermont has since verified with dispensary management.

“It has been brought to our attention that a batch of Sativa butter that you purchased on 9/21 and 10/13, batch #5564 contained mold. This is a very serious issue to us, we have since recalled all the butter from that batch and notified all patients who have received that batch. We will no longer be selling the butter until we can resolve this issue. Our apologies and we will ensure you get a full refund for your product. Please contact US with any further questions or concerns.” Reached by phone early Thursday morning, a representative from the Vermont Patients Alliance Management confirmed that the Department of Public Safety (DPS) visited the dispensary location in Montpelier to inspect the product, apparently after seeing the image on social media.

The dispensary representative also explained how the reporting process works for patients who have concerns about a product and what happens when DPS receives a notification from a patient about a questionable product:

“If a patient of any dispensary has an issue or concern with a medical cannabis product, he/she should absolutely call the dispensary directly by phone; However, patients also have the right to contact DPS directly by phone and/or email. When DPS is notified of an issue, they will visit the dispensary in question to independently inspect the product and remove it for third party testing.”

The VPA Management representative confirmed that DPS had inspected their products on Wednesday and that none of the other cannabis butter from batch #5664 or any other infused products had shown any signs of mold, but that the VPA was still issuing the voluntary recall. The representative also explained the internal policies the dispensary has in place to prevent product spoilage:

“Within best practices for handling all dairy products, we heat the butter above a safe temperature (over 165 degrees) for a period of time in order to kill bacteria and closely monitor temperatures throughout the process of preparing the butter, as well as when storing it. For example, you can’t have any porous surfaces in your kitchen, which we dont and we don’t use any sponges, only single use clothes; all of the trash cans have to be covered; handling and packaging are done with extreme caution and extra sterilization; and storage temperatures are monitored and recorded hourly in a daily log.

That batch had been monitored and documented as being produced and stored safely at the dispensary, but we’re really disappointed that a patient had this experience and are re-checking our protocols and all of our products in addition to the recall of the butter and have invited the Department of Public Safety to conduct a full inspection of all of our facilities.”

Thanks to the introduction from a moderator of a private medical marijuana patient facebook group where the picture first appeared, Heady Vemont was able to directly reach Mr. Brawnson Michael Lewis, a 20-year-old Barre resident who registered as a patient at the Vermont Patients Alliance during the summer and purchased the butter.

Mr. Lewis, had originally contacted the dispensary’s cultivation department on October 19, but management for the dispensary said the cultivation staff do not check their email daily as they are only looking for monthly clone orders and therefore did not see the email until October 21. The cultivation team responded immediately to the patient and forwarded the email to the dispensary management team; however, an internal ‘reply’ response instead of a ‘reply all’ response meant that Mr. Lewis did not receive the email offering the full refund and an apology until October 25, when they announced that they would be issuing a product recall.

Heady Vermont first reached out to Mr. Lewis via Facebook on Monday. In an interview on Monday and a follow-up early Thursday morning, he said the butter hadn’t been left out or handled any differently than past purchases he had made at VPA, where he’s been a registered patient since the summer earlier this year.

“I went straight home and put it in fridge like I do every week. I went to use it at night a week or so later and there it was rotten as all hell.”

When asked about the refund, Mr. Lewis said, “It’s only $15, which I’m not worried about, it’s the concept.”

The VPA was the first dispensary to open in Vermont in June 2013, and is located in the capital city of Montpelier with a cultivation facility in Waterbury. The VPA plans to open an additional retail ‘satellite’ location in Hartford, Vermont in 2018. Their website highlights the product testing as a defining feature of the state’s second-largest dispensary:

All of our products are routinely tested for potency and contaminants which means that our patients can be confident in the quality, potency and consistency of the medicine that they are using.

The recall news comes the same day that the Joint Legislative Justice Oversight Committee is scheduled to hold a hearing at the State House in Montpelier where the Vermont Agency of Agriculture is presenting a report titled, “Marijuana-Infused Product Testing” that will suggest that the state take responsibility for third-party verification of infused cannabis products.

The State laboratory identified for testing, marijuana and marijuana-infused products, is the Vermont Agriculture and Environmental Laboratory (VAEL), a component of the Agency of Agriculture, Food & Markets (AAFM). Minimally, VAEL should be equipped, staffed, and prepared to perform routine cannabinoid potency testing on marijuana-infused products to ensure consumer protection. The VAEL should be prepared to perform potency, adulterant, and contaminant testing on cannabis raw material and cannabis-infused products. Furthermore, the VAEL has the ability to evaluate the in-house procedures utilized by the dispensaries to ensure adequate method performance.

The Agency of Agriculture report was crafted with input from the Department of Public Safety and representatives from the dispensaries themselves, who support the state lab handling oversight as an independent third party testing entity. The detailed proposal includes testing standards, costs, and an overall program budget. If the testing were not to be done by the state, the report outlines standards and operating procedures for licensing independent testing labs.