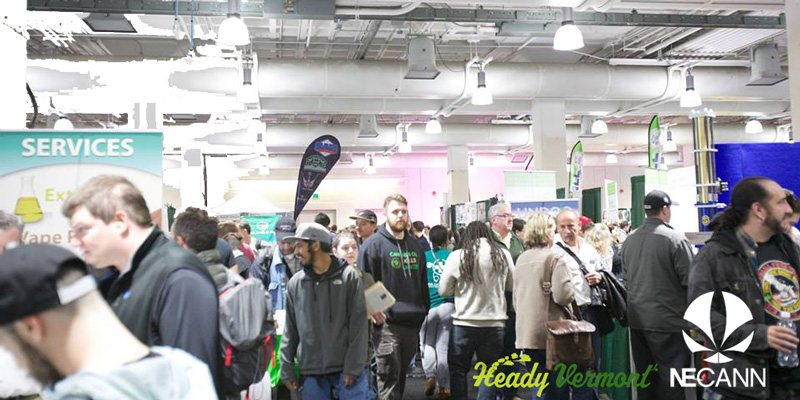 In Vermont, interest in cannabis continues to grow, as evidenced by the explosive growth of the CBD sector, and its supporting ancillary businesses. The Vermont Cannabis and Hemp Convention is the next step in elevating and connecting the cannabis industry and culture within Vermont, and with regional partners representing all six New England states.

The event itself will take center stage in Burlington at the Sheraton Conference Center from May 11-13 and will include exhibitors and vendors from all over New England, including CBD products, medical marijuana dispensaries, patients, and caregivers, home cultivation suppliers, advocacy groups, and a wide range of additional ancillary businesses related to the cannabis plant and industry.

Organizers say they are optimistic that the two-day event will draw several hundred attendees and that vendors, exhibitors, keynote speakers, and panel discussions will more than fill the 12,000 ft.^2 convention space at the Sheraton.

NECANN Co-Founder Marc Shepard, said that he has been interested in coordinating a conference in Vermont for a few years, but it wasn’t until earlier this year that he was convinced it was feasible in terms of the public interest and industry activity in Vermont cannabis.

“We’ve found that having a locally focused event, with all the educations and programming focused on the host state is the best way for us to help the process of cannabis normalization,”said Shepard. “Rather than waiting until the industry is up and running, we like to be part of the process, and the time for that is now in Vermont.”

“We like to be part of the process, and the time for that is now in Vermont.”
– NECANN Founder Marc Shepard

Despite the veto of Vermont’s legalization law in 2017, Shepard says that none of his events has thus far featured on-site consumption of cannabis and are all unique based on the varying medical and adult use cannabis laws in each of the five states he presently operates.

The NECANN show model is built on the premise of supporting local cannabis businesses, as well as introducing regional partners, investors, and interest from other New England states. For that reason, when Shepard started to plan for Vermont, he identified previous NECANN attendees from Vermont with experience and connections in the local cannabis community and industry.

“The inaugural Vermont Hemp Fest at Burke Mountain last month was proof that there is an emergent industry around the plant in this state, and it’s ready to rock and roll,” said Heady Vermont Co-founder Monica Donovan. “We’re looking forward to being able to include an even wider pool of people for the Vermont Cannabis and Hemp Convention.”

NECANN is a Massachusetts-based company that was co-founded by Marc Shepard, a pioneer in the New England cannabis community who has been organizing increasingly larger cannabis conventions in Boston and Portland since 2014 and this year is adding Providence, RI; Reno, NV; and Burlington, Vermont.

The most recent NECANN show in Boston was held at the Hynes Convention Center, only steps from the Marathon finishing line in the heart of the Back Bay and included over 5,000 attendees, nearly 200 exhibitors, two full days of educational programming covering every aspect of New England Cannabis, from cultivation to processing to product making to business development and expanding  medical marijuana and hemp.

The organizers say that while the Vermont Cannabis and Hemp Convention won’t feature consumption of THC cannabis on-site, but expect a significant amount of CBD hemp and industrial hemp businesses to be present and displaying a wide range of products. The educational panels and interactive workshops at the Vermont Cannabis and Hemp Convention will also include information about becoming a medical marijuana patient/caregiver, therapeutic usage of medical cannabis, growing cannabis, industrial hemp, CBD products and businesses, and political advocacy for cannabis reform.

“We are looking forward to connecting with the entrepreneurs, advocates, investors, growers, and more that will make up the Local Vermont industry, and continuing our mission of empowering New Englanders to connect and take control of and benefit from the amazing opportunities it holds,” said Shepard.

National survey data show that in terms of percentage of the population that used cannabis in the last year, five of the top ten states were in New England: #2 Vermont, #4 New Hampshire, #5 Massachusetts, #7 Rhode Island, and #9 Maine.

Interested in being a Vermont Cannabis Convention vendor? Visit the landing page to download the exhibitor form!