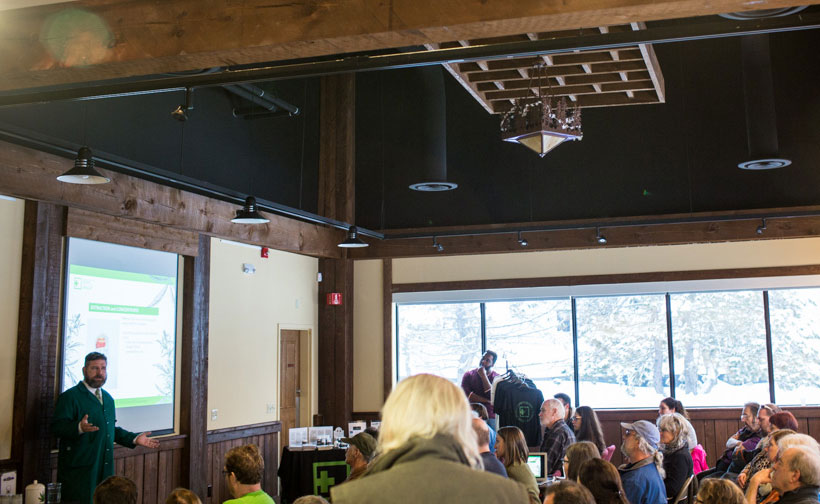 Dr. Scot Waring speaks to a crowd of patients and caregivers during a "Meet Your Medicine Makers" event at Champlain Valley Dispensary facilities in Milton, Vermont on Thursday, February 16.. by Monica Donovan for Heady Vermont.

The decision, expected in the next week, will not only add a new dispensary operator and up to two physical locations, but will shape the future of medical – and maybe recreational – cannabis in Vermont.

Not only will a new dispensary operator receive the license to open a retail location and corresponding cultivation facility (including the right to grow outside in a greenhouse), all license-holders are also able to open a second ‘satellite’ retail location, meaning the total maximum number of physical locations where medical marijuana is sold in the state will increase from the existing four to a maximum of ten locations.

As Heady Vermont reported in July, each of the existing dispensaries applied for second retail locations, in the towns of South Burlington, Williston, Middlebury, and Hartford. Heady Vermont reported that Bennington had received at least one application from a group called Vermont Green Grow, and subsequent reporting from VTDigger, The Valley News, and others revealed that new license dispensary applications had been submitted for potential locations in Hartford, Rutland, Winooski, and Lyndonville.

The dispensary expansion is happening as the state’s marijuana registry continues to grow quickly: In the 33 weeks between November 2016 and June 2017, the Vermont Marijuana Registry grew by 27.3%.

As of August, existing home grow patients may also now purchase up to two ounces per month from one – and only one – dispensary that he/she designates.

Although medical marijuana itself is untaxed, the dispensaries themselves will now be allowed to transition into for-profit businesses that can receive outside investment, advertise, and operate as more conventional business structures.

This means that whereas the original dispensaries initially had to operate as nonprofits – a fact they’re not wrong to point out – now all dispensaries may sell equity percentages of the dispensary businesses to raise funds and otherwise operate like conventional businesses.

While that doesn’t help dispensaries access traditional banking services, it does open the door to out-of-state investment and an actual business valuation and make that dispensary license even more valuable.

There’s good reason to believe that at least initially, medical marijuana dispensaries will have the first (exclusive) opportunity to sell to the much larger (hypothetical) adult use market. This is how it’s gone down in other states (including Massachusetts right now) and that same deference to the known operators makes the most sense from the perspective of Vermont regulators who have only ever trusted or had to regulate a small group serving a relatively small market.

In New York, where the medical marijuana laws are still very much being tweaked and there are a limited number of licenses to serve a fast-growing population, Forbes reported that one of the state’s ten dispensary license-holders just sold the business for $17.3 million before even putting a plant in the ground.

The applications were reviewed by a panel, comprised of Department of Public Safety Staff, including the DPS staff who presently oversee and administer the medical marijuana program, including existing dispensaries and dispensary operators.

The patient and caregiver were eventually selected and after reviewing the seven total applications, all members of the panel scored their applications independently without consulting each other. The applications themselves did include the names of the applicants, along with names of business partners, spouses, and relatives; that practice that has drawn criticism online from those concerned that higher profile applicants may have an advantage.

The applications themselves were scored on a 100-point scale with three major criteria: safe and secure communities (40pts), overall health needs of registered patients (35pts), and business plan and facility information (25pts).

While it’s not written in the actual rules for the application or the laws, it’s a safe bet that a single municipality will not go from zero dispensaries to two dispensaries, and since there’s only one application process for both the satellite locations and the new dispensary(ies), they are in direct competition with each other.

As of publishing, the selection panel, including the patient and caregiver, have submitted their top recommendations – whether that’s a top two, three, or four –  to Department of Public Safety Commissioner Thomas Anderson, who was appointed by Governor Phil Scott in December 2016.

It’s unknown exactly how long Commissioner Anderson will take to review and consider the applications before making an announcement about both the dispensary satellite locations and the new licensee, but likely within the next two weeks.

Of the seven applications that have been received, four have been revealed publicly through reporting in VTDigger and elsewhere. Original Heady Vermont reporting at the application meeting identified a registered Vermont lobbyist from the firm MMR and with several national pharmaceutical clients and at least one Vermont client with an interest in a dispensary license.

The first to reveal themselves publicly after arriving on the Vermont State House scene in fall 2016 to advocate for more patient access in Bennington – access they’d like to provide via a cultivation and retail facility in Bennington with the assumed support of Senator Dick Sears (D – Bennington), who after years of…caution…towards cannabis reforms, has advocated for patient access in Southwestern Vermont and larger legalization reforms.

Four of the principal Vermont Cannabis Collaborative Founders (among others, including Hinda Miller, Michael Jager, Rob Williams, and more) ended any speculation they were going to stick to hemp by telling VTDigger‘s Morgan True, ‘we want to be in the game’ and that if not approved, they’ll apply for the next available dispensary license and otherwise stay in the cannabis game via hemp and CBD. “It’s time to open up the field,” said Will Raap, whose children are also involved in the Vermont cannabis industry as owners and operators of Green State Gardener, along with Nectar’s co-owner Chris Walsh.

As VTDigger reported, the Rutland Town Select Board didn’t ban the potential siting of a medical marijuana dispensary at the Norman Rockwell museum on Route 4 in Rutland. In fact, multiple select board members wished the Mendon resident – and Vermont medical marijuana patient himself – good luck on his application. Reilly Jr. also indicated he would sell $250 ounces and donate 2% of profits to fighting opiate addiction.

From a conversation with the town manager of Hartford, Valley News Reporter Matt Hongoltz-Hetling learned and revealed quite a bit, all of which was reprinted in VTDigger online.

As Hongoltz-Hetling reported, the Vermont Patients Alliance contacted Hartford town officials to ask for paperwork affirming there are no statutes prohibiting a medical marijuana dispensary (there aren’t). A second inquiry was made by a business owner who was approached by a company about acquiring his property for a potential dispensary. That property owner declined to name the potential buyer and dispensary operator.

“So who do you think is going to get the license?” is the (several) million dollar question and while one could speculate, only the DPS staff and two other individuals involved with the scoring, and Commissioner Tom Anderson have actually reviewed the applications.

As applicants are notified this week as to their status, expect to see strong reactions, excitement, and the beginning of a new chapter in the evolution of cannabis in Vermont.