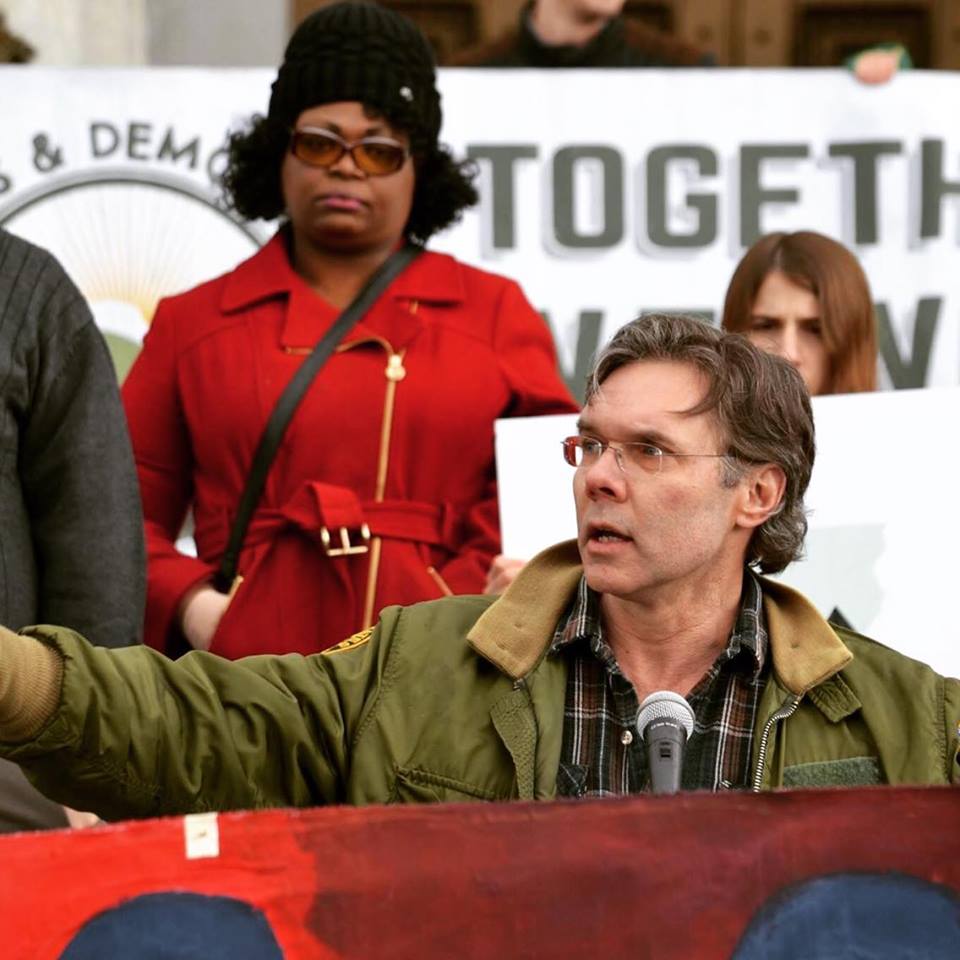 I catch my first glimpse of James Ehlers hurriedly leading a television reporter to the walkway surrounding the Winooski River. The two-man crew is interviewing the 48-year-old Democratic gubernatorial candidate about Gov. Phil Scott’s “Clean Water Week,” which Ehlers writes off as a “political” move rather than genuine concern on the Republican’s behalf for the state’s waterways.

Ehlers’ silver-streaked hair is pulled back in a small bun and, wearing a blue button-up shirt, dark green shorts, and brown sandals, he speaks clearly and authoritatively to the reporter about how Vermont’s ecology is intertwined with the state economy, and rallies against big businesses taking advantage of the state’s environmental resources to line their own pockets.

“Chunky Monkey is not a necessity for life,” Ehlers insists, referring to the Unilever-owned Ben & Jerry’s ice cream flavor. “Water is.”

Ehlers, a Winooski resident, is well-known throughout the state as an environmental activist. The former Navy officer and Villanova alum is the executive director of Lake Champlain International and host of the WDEV radio program “Our Nature,” where he advocates for land stewardship and environmental conservation issues.

As he wraps up with the news crew, he remarks why he’s announced his candidacy now rather than wait to see how the field plays out – “I’m not a politician. I don’t have a choice but to get in early.”

After breaking away from the camera, he invites me into his home – a well-kept single bedroom apartment, in which bookshelves swell with a variety of texts, ranging from political science to sociology to fiction. Immediately I’m drawn to the collection – you can tell a lot about a person’s influences and philosophies by their books; Ehlers explains they are “not even half” of the “only possessions” he cares about.

It’s not long before he begins espousing some of those philosophies, explaining why he’s thrown his name into the race and why he chose to run on the blue ticket.

“This is a race of national significance,” he opines while pouring a glass of filtered tap water, “The Progressive Party might have resources in Vermont, but they don’t have any national resources and there aren’t many working-class people representing working-class issues in the Democratic Party.”

“This is a race of national significance … there aren’t many working-class people representing working-class issues in the Democratic Party.”

He describes himself as a “Bernie-crat,” a Democrat with progressive ideals, while he shows me the Vermont Democratic Party platform, which includes forward-thinking (and, to some, common sense) proposals for environment and energy conservation.

“Why now?” I ask, curious as to why he hasn’t run for office before – it’s not like the environmental and social issues facing the state (and the nation) are a new development.

“It’s a confluence of things; I want to fix problems,” he says, calling Donald Trump’s election “a disaster.” Ehlers tells me that he’s “known who [Trump] is since the 1990s” when, in an interview with Howard Stern, the 45th President gloated about his sexual conquests on the air, describing avoiding sexually transmitted diseases as his “personal Vietnam.”

“I’ve been incensed ever since … This guy is an embarrassment not only to our country but to all that have served – five deferments, bone spurs – I have no problem with conscientious objectors but using your status as a wealthy person and making things up as to why you can’t serve – that, to me, is cowardly,” he says sharply, giving me my first real insight into his passion. His lake-blue eyes are fixed onto mine while he speaks.

Ehlers doesn’t mince words about his opinions of “trickle-down Republicans” – including Scott in that cadre – the same ilk seeking to de-fund the Environmental Protection Agency; making clear that he isn’t seeking the Democratic nomination solely to rebuke the GOP policies but to “challenge a guy (Scott), and a historical or general accepted notion that one-term governors don’t lose in Vermont.”

Ehlers doesn’t mince words about his opinions of “trickle-down Republicans” – including Scott in that cadre – the same ilk seeking to de-fund the Environmental Protection Agency.

“Phil is a one-term governor; the national party is concerned about losing him and it being seen as a Trump referendum,” surmises Ehlers, leaning against a kitchen counter. “Mainstream Democrats look at the 65 percent approval rating and are awed, you know, and I’m like ‘Yeah, because no one has challenged him,’” remarking that the powerful Democrats in the Legislature passed “an austerity budget” and excused their action (or inaction) as “tradition to give a first-term-governor a pass on the first budget.”

“They signed off on a budget that cut funding for low-income people in the ‘spirit of tri-partisanship,’” he says, punctuating his point with air quotes. “People think I’m upset because I didn’t get water money – I’m upset because I have friends who work in social services and at the municipal level. I know how those dollars pass through the system.”

Ehlers contends that the ideology of the budget-makers needs to be challenged – especially in an age where the federal government seeks to reduce state-funding for environmental and social programs.

“And that makes me a ‘firebrand!?’” he gasps, referring to a moniker bestowed upon him by local press. “But look at the Vermont Democratic Party platform – it’s pretty progressive – it’s just nobody lives up to it.”

The Democratic platform, however, does not include cannabis legalization – and Scott, famously, vetoed an adult-use bill just a few short months ago, which, had he signed it, would have made Vermont the first state in the union to pass a recreational-use bill via the legislature, and would have held up the state’s progressive reputation.

“Prohibition is ridiculous; it shouldn’t even be an issue.” Ehlers insists; expressing his frustration with his hands palms-up. “We have already decided as a culture that people should have access to things that make them feel good. This whole notion of utilizing government resources to police peoples’ personal behavior – it’s ridiculous.”

“We have already decided as a culture that people should have access to things that make them feel good. This whole notion of utilizing government resources to police peoples’ personal behavior – it’s ridiculous.”

Ehlers argues there are far more pressing public health issues in the state and law enforcement resources could be better utilized than policing “whether Vermonters can grow a plant that makes them giddy.” Although, he admits, that he hasn’t decided what legalization should look like in the state – a rare declaration by an individual seeking public office in an era where politicians claim to have all of the answers.

“I am open to advice on how to maximize cannabis as a resource – I would be misleading you if I told you I know what the best mechanisms are but I can assure you it’s not rocket science,” he confesses, leaning deeper into his hanging chair. “And I love how these ‘small government’ Republicans want to police peoples’ behavior – and I am going to hit Phil right between the eyes with that – ‘you want to dismantle the EPA but you want to have the cannabis cops out there? No. You’re a walking contradiction.’”

Throughout my career, I have rubbed shoulders and covered the gamut of politicians, policy-makers, and movers and shakers – both traditional and outsider – but what surprised me most about this entire get-together was Ehlers’ request for me to join him during his weekly Yin yoga class; an offer I accepted.

During our short walk to Laughing River Yoga studio, Ehlers no longer comments on the campaign. He walks briskly, similarly to how he spoke during our conversation at his apartment. When we arrive, he knows many of the folks congregated at the renovated mill which houses the yoga studio, a restaurant and other small businesses. It is immediately apparent that people are genuinely happy to see him. (He’s already the governor here, I thought.)

“How should I introduce you?” he asks as we snake through the diners and down the hallway.

“Not as a reporter,” I quip anxiously, having never been to a yoga class before, let alone a Yin class, and not wanting to make anyone else nervous.

During the 90-minute class, I witness a reposeful side of the could-be governor; his energy quiets as he sits on the mat barefoot and cross-legged.

Once in the studio, Ehlers proceeds to introduce me to as a “friend,” despite the fact that we’d just met earlier that afternoon, the proprietor of the restaurant and several of his classmates – one of which is an aforementioned social worker.

As we roll out our mats in the back corner of the studio, which overlooks the Winooski River, I recall that his girlfriend had mentioned he preferred the front of the class and I reckon he is doing me a solid. While we’re waiting for the class to begin, he opens up about how yoga has helped him heal – both mentally and physically – and to compartmentalize his thoughts and clear his head. He’s attended this class for the better part of the year.

During the 90-minute class, I witness a reposeful side of the could-be governor; his energy quiets as he sits on the mat barefoot and cross-legged, now wearing gym shorts and a t-shirt. It’s the first time in my career that a gubernatorial candidate behaves like a average citizen – which Ehlers is, of course. Unlike the other candidates and politicians I’ve encountered he’s allowing a member of the press to see him unguarded, to take a peek into his daily life sans ego, devoid of a suit, a well-furnished office, and awards procured with budget earmarks.

“That was fun,” he says as the class concludes; his calm apparent.

During the walk back to his place, where I had left my bicycle, he tells me about his camp, his affection for Vermont, his 1997 award for guide of the year from the Vermont Outdoor Guide Association, and divulges that he has a knack for calling moose. He muses that his outdoor and conservation credentials will likely appeal to some Republicans.

“What will be the first thing you do if you win the election?” I ask him earlier in the day while sitting in his living room.

He looks to the ceiling and chuckles lightly. For Ehlers, it’s not if he wins the election – it’s when – and when confronted with the when, he doesn’t rattle on about what policies he’ll support or what executive orders he’ll sign.

“I’ll find a way to thank everybody who helped me,” he says with a contemplative grin. “I’m not sure how, but I’ll think of something.”