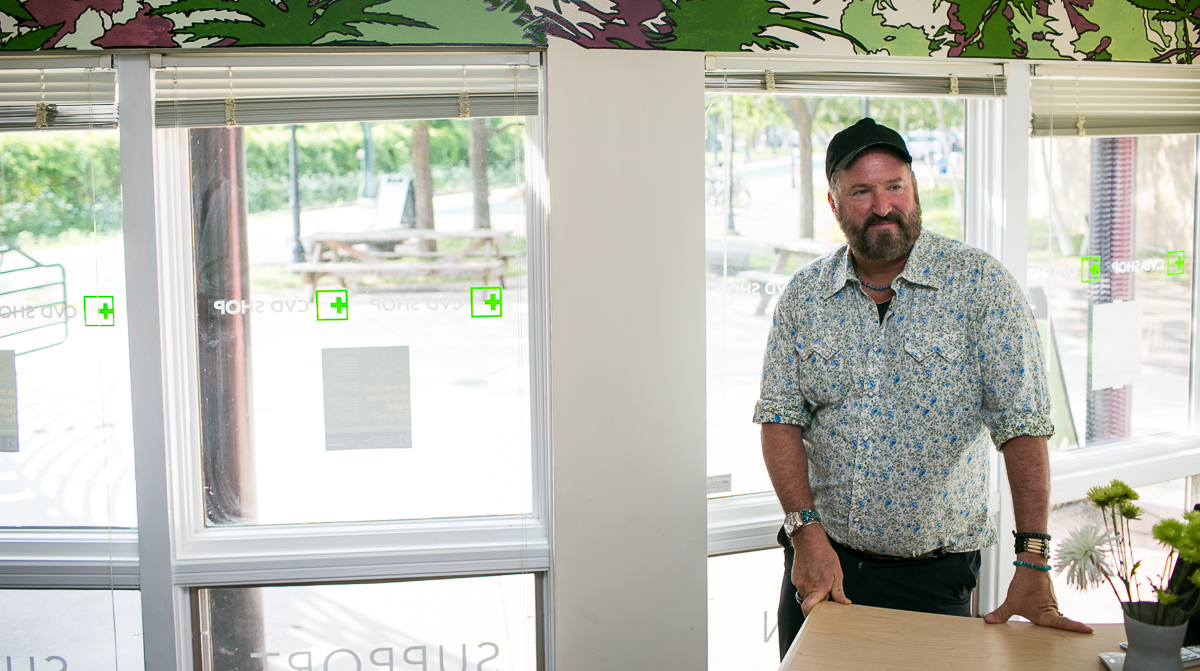 Retail Operations Manager Chris Copley at the CVD Shop on the Bike Path at 1 Steele Street in Burlington, Vermont on Wednesday, July 20, 2016. by Monica Donovan for Heady Vermont

Ceres Natural Remedies is a natural fit for Hemp Fest – with two retail locations and 17 brands of hemp-derived CBD products including capsules, topicals, transdermal patches, oils, and isolates – the company offers the largest selection of CBD products in the state.

For Chris Copley, head of business development for Ceres, Hemp Fest is an opportunity to network with hemp farmers and producers in the state and get a look at other products that could fit on the company’s shelves. He said he is most looking forward to connecting with the state’s hemp farmers who are seeking to have their hemp crops tested to ensure they don’t contain THC levels higher than the 0.3 percent threshold defined under both state and federal laws and to offer them extraction services.

“If it does test proper we’ll be able to help them out,” Copley explained. “And they can then do one of two things – they can either sell to us or we can just charge them for the extraction and testing and they can take the oils and do whatever they were looking to do on their own.”

Copley indicated that with the rate of the hemp industry’s growth in Vermont, Hemp Fest is a necessity. Despite following the industry closely, in an effort to build-out the company’s CBD product lines, several companies and farms have begun entering the industry under his radar and he wants them to know that Ceres can provide them a variety of services, from testing, to extraction, to distribution in their Burlington and Brattleboro locations. “We want to connect to growers and also people who are doing products and brands. I’m very interested in seeing the knowledge-base that’s in the market right now.”

“Ceres can be this preeminent-focused store on CBD and if you are making a CBD product, and it’s legitimate, we’re really interested in taking a look at it,” he said. “This is an opportunity for us to connect and learn about what other peoples’ vision is.”

“If you are making a CBD product, and it’s legitimate, we’re really interested in taking a look at it.”

Further, Copley said Hemp Fest will showcase “the economic value” of the industry that could spark “an agricultural revolution” not just in Vermont, but throughout the U.S. He said the viability of the cash crop is evidenced by the “hundreds of thousands” of acres of hemp being planted in Kentucky. He hopes Vermont farmers not currently cultivating hemp will be emboldened by the event and decide to add the crop, noting that there are only about 120 farmers throughout the state who hold valid hemp-growing licenses. Hemp Fest, Copley said, could be a turning point for raising awareness and position Vermont as a worthy competitor to Kentucky, which is leading the nation in domestic hemp production.

And as Vermont’s hemp market share grows, so with it does Ceres. Copley said the company plans on opening two more locations by the end of the year in order to make their expansive offering of CBD products more accessible to consumers throughout the state.

“I’m hoping to say a lot of ‘Hey, let’s work together, let’s do some business and drive the state economy,’” he said. “Hemp Fest should be great for us and the state’s farmers.”