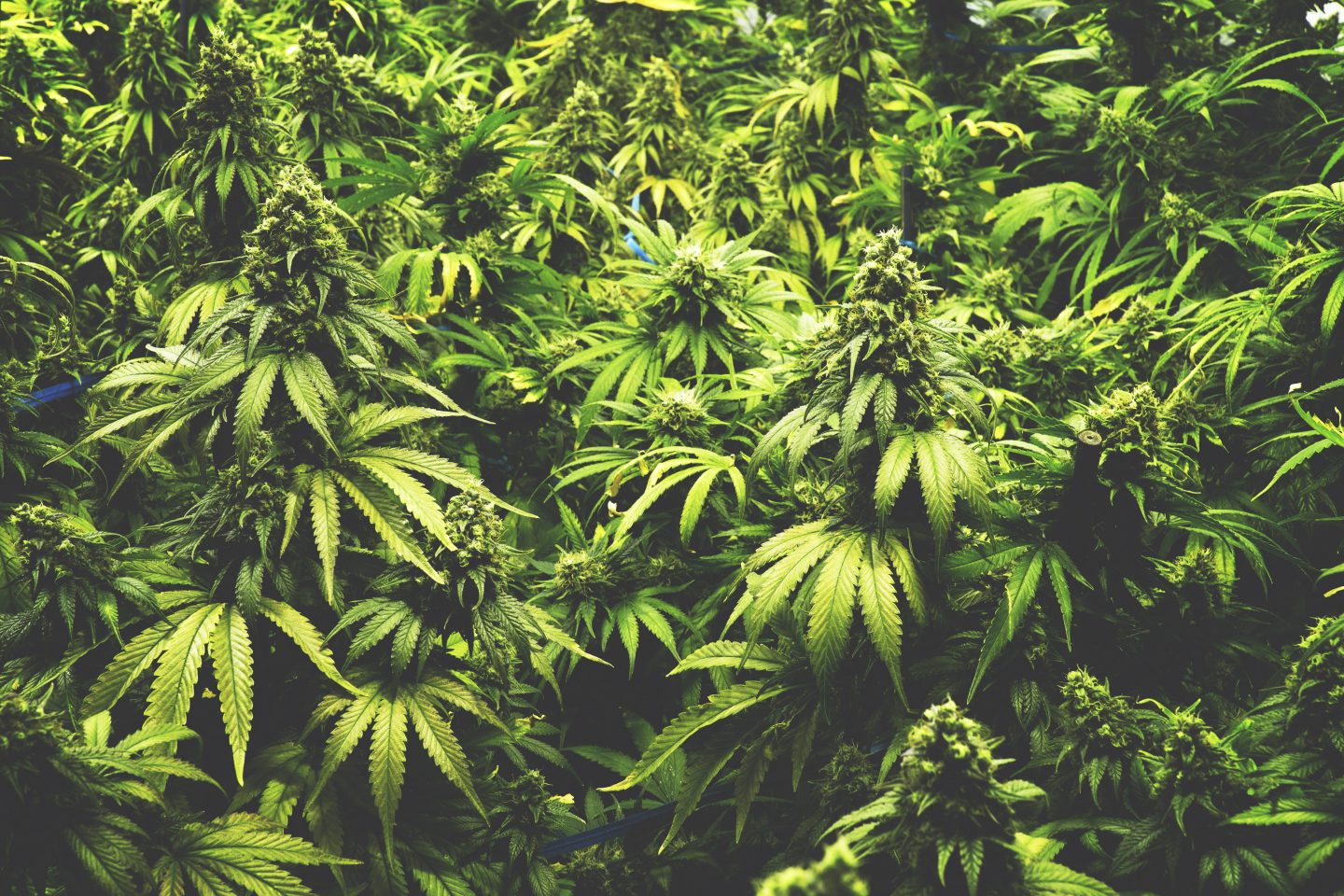 Editor’s Note: This article originally appeared on www.tuck.com and is reprinted with permission from Tuck.

In a recent survey of medical marijuana users, 76 percent of respondents reported using cannabis for relaxation and 65 percent as a sleep aid. The survey, conducted by HelloMD—the “largest community of patients using marijuana for health and wellness in the country”—also found that comorbid, insomnia-inducing factors were also popular reasons for weed intake: stress and depression. As many as 84 percent respondents reported that the mind-altering, psychoactive drug provides them with a significant relief of symptoms, and 96 percent of users said they’d recommend marijuana to their friends.

But do peer-reviewed studies support this enthusiasm? In this article, we take a look at the latest and most robust research regarding using marijuana for sleep.

Cannabis in the U.S.: A Recent Change in Status

In the last decade public support for the legalization of marijuana has risen drastically, some states allowed the use of marijuana for both medical and recreational purposes, and Americans began to shed the stigmas and stereotypes about those who avail themselves of the drug. Cannabis use is no longer something to snicker at, to be discreet about, or to resort to when demonizing certain demographics. Marijuana is no longer just for stoners wearing frayed denims wanting to get as high as a kite and watch Microcosmos; cannabis is also for retirees and high-performing professionals and vets who may have no interest in getting high but want to sleep soundly and without pain.

According to Pew Research Center, Americans favoring legalization of marijuana have outnumbered those against it and continue to rise. Fifty-seven percent of U.S. adults say the use of marijuana should be made legal, while 37 percent say it should be illegal—a reversal from just a decade ago. The support transcends political party and age group affiliations. One in eight Americans confesses to using marijuana. One in five people now lives near somewhere with legalized cannabis. About seven in ten Americans now believe that alcohol is more harmful than cannabis. With weed’s newfound respectability on the rise, marijuana use has increasingly become the subject of research.

“ Marijuana is no longer just for stoners wearing frayed denims wanting to get as high as a kite and watch Microcosmos; cannabis is also for retirees and high-performing professionals and vets who may have no interest in getting high but want to sleep soundly and without pain. “

Obstacles to the Study of Marijuana and Sleep

The users’ enthusiasm and the public’s support for marijuana notwithstanding, it has not been easy for scientists to study the effects of marijuana. It is so because legally, institutionally, and culturally embedded hang-ups remain. While more space for serious, scientifically-based conversation about the benefits and downsides of weed—including the use of marijuana for sleep—has opened up, we cannot underestimate the difficulties that federal regulations continue to pose.

Criminality at the federal level.

Cannabis is still a Schedule I controlled substance, in the same category as heroin and LSD. The American Medical Association urged the government to reclassify marijuana so that trials can be conducted more easily. For a journalistically sound expose of the difficulties involved in scientific research of marijuana’s properties, see satire-practicing journalist’s John Oliver’s take from show that aired in April of 2017. “If you have marijuana right now, even if you are acting completely legally according to your state, you may still be in serious jeopardy,” Oliver pointed out. “You could lose your home, job or possessions.”

Scientists and other critics also claim that the federal government is still ill-prepared to conduct meaningful marijuana studies. “Due to federal prohibition and regulations, all of the marijuana used for US research is provided by one facility at the University of Mississippi through the National Institute on Drug Abuse (NIDA),” write journalists at Vox. “But researchers have complained for years that the quality of marijuana that NIDA supplies is terrible—typically far below what you can get from state-legal medical or recreational marijuana markets or even the black market.”

Researchers tasked with studying marijuana’s effects have been vocal about their frustration with the strength of the samples. The federally provided sample “doesn’t resemble cannabis—it doesn’t smell like cannabis,” lamented researcher Sue Sisley, who is conducing a federally-sponsored study about the effectiveness of marijuana as treatment for veterans with PTSD. The potency of the federally provided samples that she and many other researchers report having received did not match the strength that they requested. “It’s unclear whether mold, lead or discrepancies in potency has been a problem in prior cannabis studies, because until now, it appears that no one looked,” PBS NewsHour notes in it March 2017 investigation. In 2014, only 6 percent of studies on marijuana analyzed its medicinal properties. There’s a light at the end of the claustrophobic tunnel: In August of 2016, the DEA announced it would permit additional growers to register as producers  produce of marijuana for research purposes.

Why talk about these limitations? They need to be kept in mind when we look into the results of the studies regarding marijuana’s use, including our focus here: the use of weed for sleep. Unlike with other, legal, drugs and means to fall asleep, in the case of marijuana’s use to induce restful slumber, the answers that the medical field has so far provided are partial, often contradictory, lacking clear takeaways, and very limited. Doctors and researchers are confused, too. “Clinicians,” notes the American Thoracic Society’s marijuana workgroup, “and in particular pulmonary, critical care, and sleep physicians, although called on to make important clinical judgments on behalf of patients using marijuana, are no less subject to the confusion and politicization surrounding the topic.” More robust, peer-reviewed, longitudinal research is needed.

Variations at the producer and consumer levels.

Add to all this other complicating caveats: The effects of marijuana can vary greatly from person to person. A piece of dark chocolate containing CBD and THC might relax and put to sleep one person, but it might provoke another to excessive chattiness or rumination. It is also true that producers and distributors of marijuana, where it is legal, are still tweaking the dosage and predictability of various edibles, tinctures, and the weed for smoking. With advancing regulation and quality control, much progress has already been made in states where both medical and recreational weed is legal, like Colorado, Washington, and Oregon. What Science Tells Us Regarding Marijuana’s Effect on Sleep

While difficulties with obtaining robust samples and studies persist, researchers have reached some conclusions, some of them contested and tentative, regarding cannabis and sleep. Here are the most important ones:

“The paradox of marijuana both inducing and relieving anxiety is reconciled by understanding that effects on anxiety levels are dose-dependent,” according to a scientific review of cannabis and anxiety. The Harvard-based authors of the same publication, “Medical Marijuana and the Mind,” say that CBD appears to interact with the more high-producing THC to result in sedation and that it may have independently “anti-inflammatory, neuroprotective, or antipsychotic effects, although the research is too preliminary to be applied clinically.” While a high dose taken by the unprepared might result in anxiety or even psychosis (the extreme results of a high), it is “not yet known whether marijuana increases the risk of developing a persistent anxiety disorder.” While a lot of people who smoke marijuana have anxiety, the authors of the Harvard statement say that this may be because of selection bias—meaning, marijuana is not causing the anxiety, rather, anxious people are more likely to reach for marijuana.

Some studies, including the 2016 one from Boston University’s School of Public Health, appear to contradict these conclusions, noting that marijuana contributes to the lowering of sleep’s quality. But it may be that self-selection bias is part of the picture: people who smoke weed tend to do it because they are anxious. “Study participants who didn’t smoke every day usually smoked in the evening,” said one of the lead researchers. “But once you’re smoking multiple times a day, there’s a greater chance that you’ll report disturbed sleep. Only by stopping marijuana completely, and waiting some time without using at all, will a person be able to determine how marijuana was affecting, or not affecting, his or her sleep.”

Resources on Marijuana and Sleep