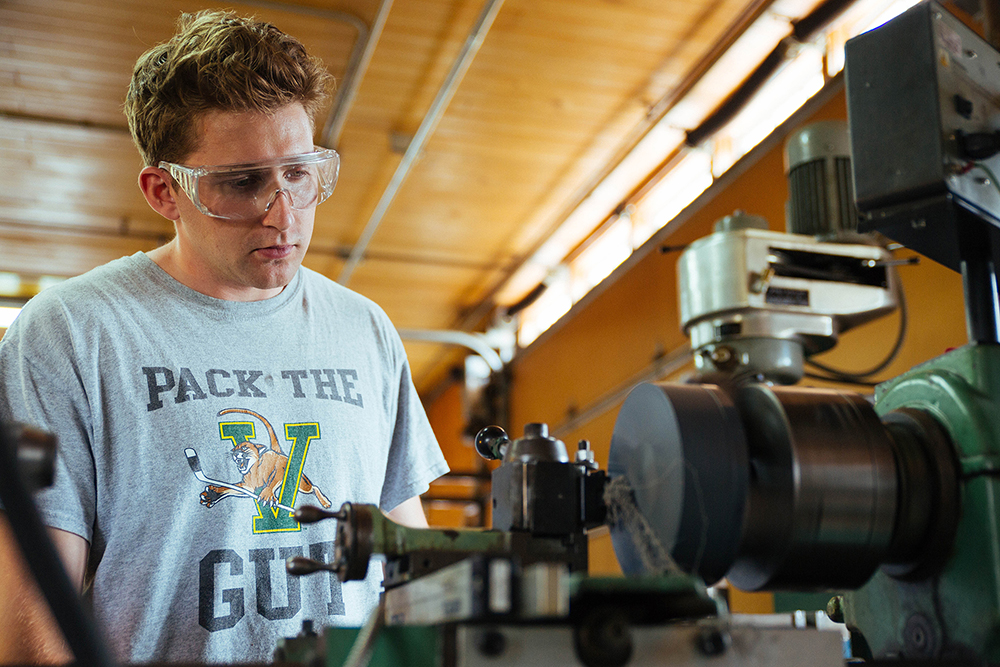 Emir Heco is the 32-year-old head of product development for Purple Fox Engineering, an Essex Junction-based “prototype production shop that takes ideas from a napkin sketch and turns them into a reality.” The company’s lifeblood is innovation – which makes them the perfect partner for the Vermont Hemp Fest Business Pitch Competition.

The event is open to Vermont entrepreneurs promoting working landscapes in the state, not necessarily related to hemp, and competitors will make their bid for the $1,000 cash prize and $2,000 in-kind services from Purple Fox and Heady Vermont. Those services, Heco explained, could be design, engineering, or manufacturing for whichever product or service most impresses the panel of judges.

“As an engineering company it’s important to start the effort of creating some legitimacy in the [hemp] industry and attract a different audience, an entrepreneurial audience, to the industry and help people realize their potential.” By the young engineer’s estimation, Vermont’s hemp industry not only represents one that could be “just as big, if not bigger” than the state’s craft brew industry – ranked 20th in the nation by the Brewer’s Association, contributing more than $271 million to the state economy – but also an opportunity for his company. Heco believes getting involved in the sector before other engineering firms is imperative to his company’s growth. “People don’t talk about all of the other industries that can benefit from a solid hemp industry – engineering firms like us, marketers, sales. People focus on the production but there is a whole ancillary market that can benefit.” He pointed to the “Made in Vermont brand” as one that could benefit both the state and the hemp industry because of “the quality it represents” and his belief that hemp producers “are all about quality.”

“Vermont Hemp Fest is our first chance to publicize and support the industry – it’s a great opportunity. As a company we are past the point of being afraid to talk about the hemp industry,” he said. “It’s a real industry whether people want to believe it, or support it, or not. If people are afraid to support this industry they’re just shooting themselves in the foot because you’re going to be late to the game.” Purple Fox has already developed projects with cannabis producers outside of Vermont. These projects are much-needed in a space that Heco says is “still a very manual process.”

“Looking at hemp industries throughout the country, and talking to local folks we kind of discovered that ‘oh, this is still very much a backyard industry’ in the U.S,” he explained. “If you look at the agriculture industry as a whole there is a lot of automation, and that’s not available yet for the hemp industry, which drives up the costs for farmers and consumers.”

One of the projects on tap for Purple Fox is designing an agricultural harvester specifically for the hemp and cannabis industries. Heco, who worked in the renewable energy sector before launching Purple Fox four years ago, explained that he and his team are exploring ways to modify existing harvesting technology to reap hemp efficiently and eventually sees hemp farming and renewable energies intertwined by, not just biofuels, but also “sharing land and resources for a positive purpose” such as constructing wind turbines in hemp fields.

Hemp Fest won’t be the first pitch competition Heco and his team has participated in. Previously, the company worked with FreshTracks Capital on their Road Pitch event, partly due to the firm’s expertise in evaluating ideas in order to produce prototypes.

And as excited Heco is for the competition, he’s duly thrilled for Purple Fox to release their “consumer product” at HempFest; however he decline to provide the details, preferring instead to unveil the product at the event. “We’re really the first engineering company in the Northeast that has come out in support of the cannabis and hemp industries. That’s pretty special to us.”

“It’s all very exciting. Our business is creating things and this being a new industry people are not limited by the possibilities. We have this great opportunity,” he said. “We’re really excited to see what people come up with for the pitch competition because it’s such an open market right now and this will lead to some very interesting business ideas. Hopefully we can help grow and support those entrepreneurs.”

Interested in applying to the Hemp Fest Business Pitch Competition? Check  it out on the Hemp Fest landing page. Deadline: August 15, 2017.