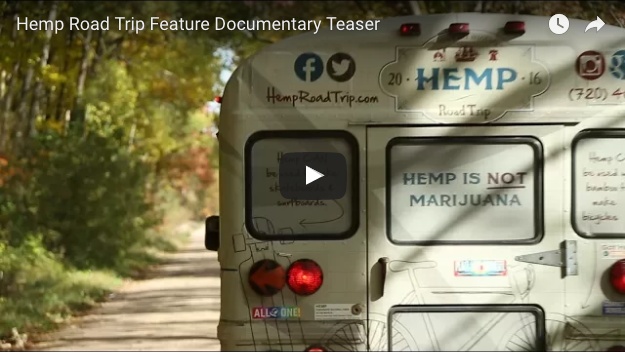 For the past two years, Heady Vermont has been writing about the journey of ‘The Hemp Road Trip‘, to whom we were introduced back in 2016 by The Vermont Hemp Company, who helped arrange their most recent visit to the Green Mountain State this past April.

In July, Founder Rick Trojan announced that the footage from the last three years of The Hemp Road Trip is being compiled into a full-length feature documentary and released a two-minute trailer that highlighted the scope of the enormous undertaking that spans 18 months, 48 states and a presidential election.

Trojan, a Colorado-based hemp farmer, started The Hemp Road Trip over three years ago as an advocacy campaign to protest the federal prohibition of cannabis, which prohibited him from selling his American-grown hemp across state lines, while multinational companies imported millions of pounds of hemp from overseas each year.

Loveland, CO — (ReleaseWire) — 07/17/2017 –For the first time in nearly a decade, the industrial cannabis industry will enjoy a feature length documentary. This film will focus on the “state of hemp” in the US, following The Hemp Road Trip’s cross-country journey and featuring individuals from all corners of the industry.

The new documentary is currently in production with amazing staff from the likes of entertainment stalwarts such as Disney. They are working hard to craft a story that spans 18 months on the road, in only 60-90 minutes. “It’s a daunting task,” says Rick Trojan, founder of The Hemp Road Trip, “because we’ve been to so many places and seen so many things. We were on site for the distribution of the largest hemp seed import since WWII in North Dakota, we got to visit with small business owners only days after they were illegally raided by law enforcement, and we even got to stop by the Wyoming Law Enforcement Academy. We helped spread accurate information about this plant at every stop along the way.”

The Hemp Road Trip has spent the greater part of the last 18 months travelling the country, hitting over 48 states, the District of Columbia and Puerto Rico. They started in Iowa during the Presidential caucuses, then New Hampshire for the primaries – attempting to make industrial hemp an issue in the nationwide campaign. They completed three more nationwide tours during the next 14 months, recently returning to Denver in July 2017.

The Hemp Road Trip is a project conceived & created by Trojan in October 2015. A hemp company he co-owns grew industrial hemp for CBD dietary supplements. Although the plant is legal in Colorado, they were unable to sell to customers in Kansas, for example, because the plant remained illegal federally. However, other companies in the industry were able to import that same compound from overseas, and sell to all 50 states legally. “This not only is unfair to domestic farmers and producers, it’s completely un-American and just plain wrong,” says Trojan. “I shared my frustration with friends who said, ‘why don’t you do something about it?’ That something was the creation of the Hemp Road Trip.”

The project began as a focused campaign during the 2016 Presidential primaries. The Hemp Road Trip took a biodiesel bus and wrapped it with many things #HempCAN do – from health to energy, manufacturing to planet. The bus was filled with hemp items: clothing, rope, food, stalks, building material, dietary supplements & a BMW car door panel. They even had a guitar made entirely of industrial hemp, except for the strings, that was signed by Willie Nelson, “Happily Cultivating Opportunity.”

After the presidential primaries, the bus and her crew made 3 additional nationwide tours. The second focused on the western portion of the country, and visited companies like Dr. Bronner, Nutiva, MtHempire, Marcel Hemp, Dash Hemp & Winterfox Farms. The third phase focused on universities, helping college students understand what hemp is and what it is not. They visited over 27 universities, from Virginia Tech to St. Could University, University of North Carolina-Asheville to University of Iowa.

The final phase focused on Senators’ home offices, particularly the Senate Judiciary members. The bus, its crew and local advocates went to visit these Senators’ offices explaining that “there is zero danger from this crop”, according to Trojan, and petitioning to give industrial hemp the same legal status as corn, wheat or any other agricultural crop. “Sometimes we were met with cautiously open arms, other times they had federal agents called on the bus and refused to allow access to Senators’ offices. I still offered them delicious hemp food, like Evo Hemp or Hemp Heroe bars, in case they were hungry. They did take a hemp copy of the Constitution, from Colorado Hemp Company, because that’s patriotic! All of it is impactful,” he says.

Coach Freddie, who was involved on the first and last phase of the trip, and heads the iHemp Revolution podcasts, said about his experience, “It was an amazing opportunity, grueling at times, but well worth it. We met folks that already knew about hemp, and those that had zero knowledge; politicians that are misinformed, but welcome to the education we provide. We simply got on the road and got after it, educating and advocating to end prohibition of this misunderstood crop.”

The Hemp Road Trip movie will debut in a few months, as production is just underway. They are launching an Indiegogo crowd-funding campaign starting on Tuesday, July 18 to help with production costs, including licensing fees, stock footage and labor, amongst others. Coinciding with the launch of the crowd funding campaign, the first Hemp Road Trip movie trailer will debut on YouTube and Facebook.