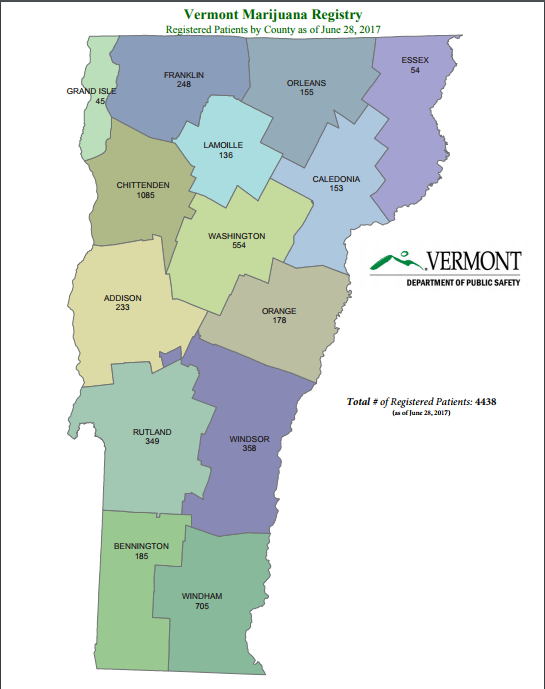 H/T & Thanks to Verdant Vermont for sharing this link with us via the Heady Vermont facebook page – find them on facebook and send us your tips and news stories at eli@headyvermont.com or via social media @HeadyVermont.

These changes include permitting a fifth dispensary license — applicants attended an FAQ session last week — AND allowing all license-holders to open up to two unique retail locations, more than doubling the number of locations where medical cannabis can be vended from the current four to a potential ten.

There has previously been plenty of speculation about potential locations for the fifth license holder, but on Monday, the Vermont Marijuana Registry confirmed that they have received completed applications from each of the four existing license holders and listed the locations of those proposed new satellite dispensaries in three Vermont counties:

South Burlington and Williston in Chittenden County, Middlebury in Addison County, and Hartford in Windsor County.

Speaking with an official from the Vermont Marijuana Registry, Heady Vermont did confirm that the four applications came from the four unique existing license-holders, each of whom submitted a single application — each application costs a nonrefundable $2500 fee to submit — for a single new satellite location.

Heady Vermont reached out to representatives of each of the four dispensaries seeking confirmations to match the existing dispensary with the satellite application; however, those representatives all declined to comment on their specific applications or did not return emails/phone calls before print time.

Although he declined to comment on the location, Shayne Lynn, Executive Director of Champlain Valley Dispensary and Southern Vermont Wellness, did respond to a request for comment saying:

“We hope our request is approved as we are continually improving our products and services for our patients – access and affordability are equally important.”

There’s certainly private speculation already about which dispensary wants to go where with these applications, and while Heady Vermont won’t publish that (probably accurate) speculation, we will update this story if/when we can independently confirm those details.

As Heady Vermont confirmed last week, at least one new applicant – Vermont Green Grow – is proposing a new dispensary in Bennington if they are granted the next dispensary license.

Dispensary applications are due Friday, July 28 at 4:30pm with the recipient being announced in mid-September (right around the same time as the Vermont Hemp Festival). A panel composed of registered patients and caregivers will review and score the applications, then give recommendations to Public Safety Commissioner Thomas Anderson, who will make the final determination.