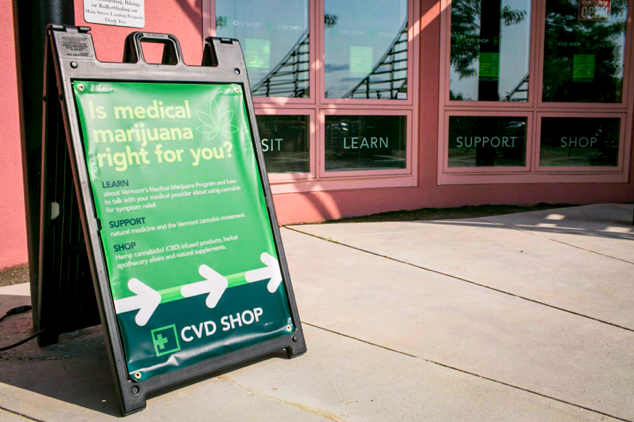 A sandwich board is prominently displayed outside the CVD Shop the Wing Building on the Bike Path in Burlington, Vermont on Wednesday, July 20, 2016. by Monica Donovan for Heady Vermont

On June 28, 2017, the Vermont Crime Information Center (VCIC) – an offshoot of the Department of Public Safety who oversee the Vermont Marijuana Registry, released a number of documents related to the Vermont medical marijuana program.

While the dispensary application going live got the headlines, the updated documents also included a new patient county chart, as well as a bar chart that show that in the 33 weeks between November 2016 and June 2017, the Vermont Marijuana Registry grew by 27.3%.

These documents were brought to our attention by former Vermont patient, advocate, and HVT contributor, Kevin Driscoll, who now works as a legal cannabis professional in Maine and formatted the figures for us based on the comparison between the November 18, 2016 patient county map and the June 28, 2017 patient county map.

That translates to 29 new patients registering in Vermont per week. If that pace continues, the program would cross the 6,000 patient threshold and trigger a sixth dispensary license becoming available the first week of July 2018.

All counties across Vermont saw an increase with the largest total increase in Chittenden County, where there were 311 new patients.

The smallest increases were in Essex and Grand Isle Counties, respectively, each of which only saw an increase of five new patients.

The county with the largest percentage of new patients was Orange County with an increase of 41.3%.