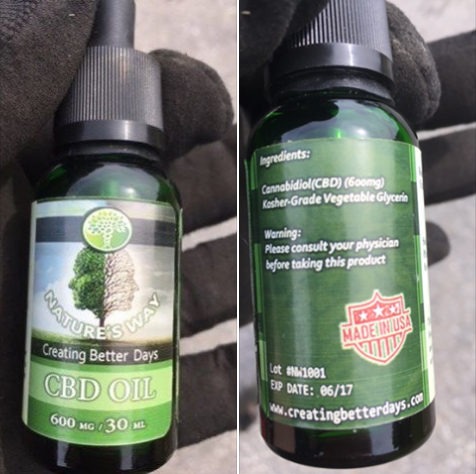 Thanks to longtime Heady Vermont reader and friend, Mike from Chittenden County for sharing this news tip with us…email your tips to [email protected] or contact us on social media.

MONTPELIER, Vt. —One day before Vermont legislators return to Montpelier for a special budget veto session that will include discussion of a possible cannabis reform, the Vermont DMV took to their Facebook page to highlight the detention of a truck driver for possessing CBD oil.

While former Vermont Attorney General Bill Sorrell assured residents in 2015 that law enforcement would defer to state and not federal law and not enforce or prosecute, the Vermont DMV apparently invoked the DEA’s recent reclassification of all cannabis derivatives as schedule one substance.

Update: Reached by phone on Tuesday afternoon, Evan Krakower, attorney for the Florida-based manufacturers of the “Creating Better Days” product featured in the DMV post said, “the product that appears in that photograph has no THC in it. Period.”

Although the detention reportedly took place on June 8, the notification comes one day before Vermont lawmakers are scheduled to reconvene in Montpelier for a special budget negotiation session, during which cannabis legalization will also be a major topic of interest.

According to the post, during a routine inspection of a tractor trailer unit’s driver, a Vermont DMV inspector discovered an oil and vaporizer that contained CBD oil, a non-psychoactive cannabis compound that has been considered legal to move across state lines. The DMV quoted Section 1308 of the drug code defining “marihuana extracts” and argued in response to comments that a “Commercial Drivers License is federal, not state,” and therefore superseded by federal law.

THIS STORY HAS BEEN UPDATED WIHT STATEMENTS FROM PRODUCT MANUFACTURER, AND VERMONT HEMP OIL COMPANY, GREEN MOUNTAIN CBD. WE HAVE REACHED OUT TO ATTORNEY GENERAL T.J. DONOVAN, AND WILL UPDATE THIS STORY WITH RESPONSES FROM HIS OFFICE AND OTHERS.

Following Governor Phil Scott’s historic veto of S.22 — the first cannabis legalization bill to be passed by a legislature, also the first to be vetoed by a governor — lawmakers and administration officials have been meeting to discuss a possible compromise bill that could be passed during the special veto session, scheduled to take place on June 21 and 22.

According to the DMV’s facebook post, the detention of the driver took place on June 8, however the post was shared on June 20, one day before the legislature reconvenes. Vermont’s law enforcement community have adamantly opposed cannabis reforms in 2017 and, in 2016, even raised ethical concerns amongst advocates, lobbying while on duty, armed and in uniform.

Up until now, state cannabis laws have superseded federal laws, with the federal government allowing adult use and medical marijuana programs to exist in specific states, provided they follow US Attorney General-issued guidelines, known as the Cole Memo.

UPDATE: Jacob Goldstein, President of Green Mountain CBD, a company based in Hardwick, Vermont that last year was offered a $250,000 investment (as reported by VPR):

Federal courts have ruled clearly that hemp derived CBD is not included in Schedule 1. As you are likely aware, on February 6, 2004 the Hemp Industries Association won it’s lawsuit against the Drug Enforcement Administration which had been seeking to prevent purchase and sale of hemp products. The court decided against the DEA, concluding that:

“..they cannot regulate naturally-occurring THC not contained within or derived from marijuana-i.e., non-psychoactive hemp products-because non-psychoactive hemp is not included in Schedule I. The DEA has no authority to regulate drugs that are not scheduled, and it has not followed procedures required to schedule a substance.”

The court clearly stated that Schedule 1 only applies to marijuana and to synthetic THC:

“We reiterate that ruling here:  in accordance with Schedule I, the DEA’s relevant rules and regulations may be enforced only insofar as they ban the presence of marijuana or synthetic THC.”

This ruling has not been challenged. We expect that the courts will clear up this confusion for the DMV.

As the test results on the Green Mountain CBD website indicate, their products have approximately .11% Delta-9 THC, well below the legal threshold of .3% and considered ‘hemp’, not marijuana.

With the Trump administration now in power, many in the cannabis industry — mostly the adult-use side — have worried that Attorney General Jeff Sessions could reverse that policy and start shutting legal cannabis businesses, seizing assets, and arresting their operators.

In the case of the Vermont DMV detention, a state law agency is invoking a federal law to specifically supersede state law and change the status quo of the enforcement, newsworthy for any reason and especially so for cannabis.

As in many states, the CBD discussion in Vermont started with parents advocating the state to allow for children to use the non-psychoactive oil for treating seizures and neurological disorders.

As Forbes recently reported, the CBD hemp industry is presently exploding and is projected to grow by 700% by 2020. In Vermont, a group of investors from Evergreen Capital, which includes the founders of Gardeners’ Supply, Seventh Generation, and Magic Hat, invested $250,000 in Green Mountain CBD, a Hardwick-based Vermont company that grows CBD hemp and produces capsules and other hemp oil products.

In late 2016, the Drug Enforcement Agency issued a statement that caused confusion and concern throughout the cannabis community. Specifically, the definition seemed to indicate that now all cannabis-derived products and materials — regardless of whether those substances include psychoactive THC or non-psychoactive compounds like CBD — would be considered a Schedule I substance.

As the Cannabist reported, in response, leaders from the hemp industry in Colorado and beyond are suing the federal government to challenge that ruling.

6/8 Inspector inspected the driver of a tractor trailer unit and found him to be in possession of a derivative of a schedule 1 controlled substance. Sec.1308.11 (58) Marihuana Extract—(7350) Meaning an extract containing one or more cannabinoids that has been derived from any plant of the genus Cannabis, other than the separated resin (whether crude or purified) obtained from the plant. The oil substance, which was vaped by the driver, is reportedly used to reduce anxiety and cause a calming effect. Driver was placed OOS for 24 hours and CMV towed. This is reported by DMV. The reference to Section 1308.11 comes from 49 CFR 392.4; which prohibits the possession of a Schedule 1 Substance. 21 CFR 1308.11 is the list of Schedule 1 drugs.